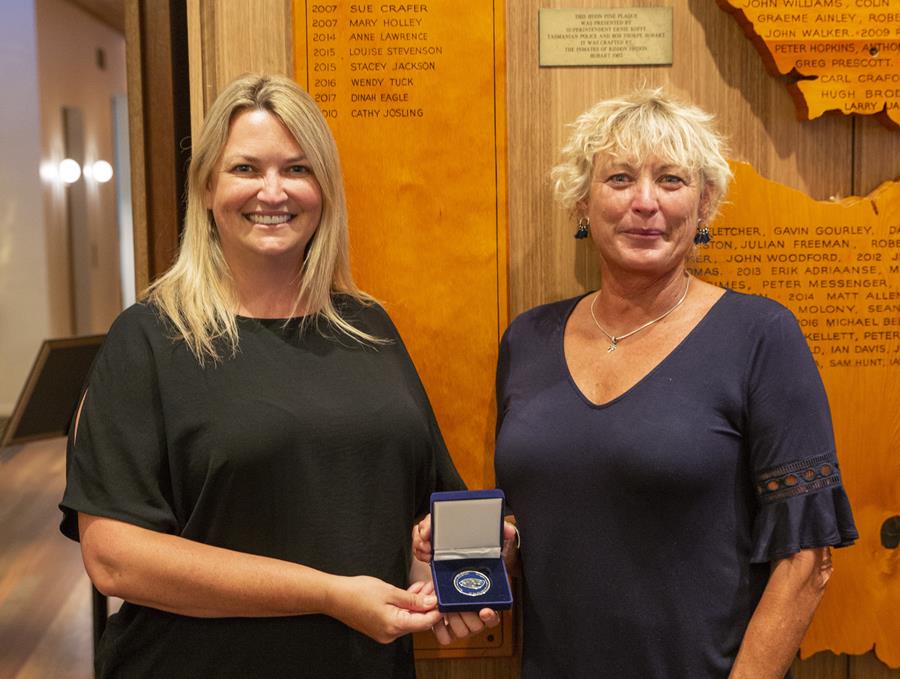 Matt Allen and Wendy Tuck have headlined a list of winners at the Cruising Yacht Club of Australia’s annual gala function to herald a new round of Ocean Racer of the Year recipients and acknowledge the champions of the Club’s 2018-19 Audi Centre Sydney Blue Water Pointscore Series.

Established in 1985 by the CYCA, the Ocean Racer of the Year Awards recognise the outstanding achievements of yachtsmen and women Australia-wide, nominated by their peers and duly awarded by the Club’s selection panel.

With Tuck away competing in Europe, the speech was left to Matt Allen: “It's an incredible honour not only to win this award but to share it with Wendy Tuck,” he said.

Allen has enjoyed sailing success throughout his career, but the last 18 months with the Ichi Ban program have been extraordinary, including winning the most recent BWPS off the back of last season’s 2017 Rolex Sydney Hobart victory. Allen is a past CYCA Commodore and the current Australian Sailing President.

Tuck, winner of the latest 40,000 nautical mile Clipper Round the World yacht race, became the first Australian skipper to complete a second Clipper race and in winning wrote herself into the history books as the first female skipper to ever win a round the world yacht race.

CYCA Commodore Paul Billingham paid credit to Allen, Tuck and all those who had competed.

“Congratulations to all winners of the CYCA Ocean Racer of the Year and the Audi Centre Sydney Blue Water Pointscore Series awards,” he said.

“The sport and the Audi Centre Sydney Blue Water Pointscore Series continue to grow – culminating in the Rolex Sydney Hobart Yacht Race, which in 2018 attracted record viewers across Australia in the Channel 7 broadcast in addition to millions across the world.

“We’re looking forward to seeing even more growth in 2019, the 75th celebration of both the Club and the race to Hobart,” he ended.

The BWPS is a yearly six-race series that begins with the Noakes Sydney Gold Coast Yacht Race and concludes with the double-points Rolex Sydney Hobart Yacht Race in December.

Other award recipients
Dinah Eagle – Sally Gordon Memorial Trophy for Ocean Crew Person of the Year
Dinah Eagle is an 11-time Sydney Hobart key member of the Wax Lyrical team. At sea she drives, trims and is a watch leader, as well as cooks, pack sails and anything else to keep the boat racing fast. Her nominee describes her as a team player and a patient mentor to the less experienced team members.

Will Oxley – Ocean Navigator of the Year
The CYCA Ocean Racing Navigator of the Year was instituted in 2008. The 2018 recipient, Will Oxley, is one of the world’s leading lights in yacht navigation and an integral member of Matt Allen’s highly successful TP52 Ichi Ban campaign. He is a major contributor to the success of the current and previous Ichi Bans, and outside of this role, he shares his vast knowledge writing books and articles which concentrate on race navigation.

Anthony Kirke – Ocean Rookie of the Year
Awarded to an owner campaigning their own boat within the CYCA’s prestigious BWPS for the first time, this West Australian owner undoubtedly has the best themed entry – Anthony Kirke, nicknamed Captain Kirke – named his boat Enterprise, from the popular original series, Star Trek.

Over the past season, Kirke organised a remote operation from the west coast, and with his WA crew outperformed as east coast rookies onboard Kirke’s Farr 40.

Bruce Taylor – Ocean Veteran of the Year
Awarded to a stalwart of the sport, Melbourne’s Bruce Taylor is a longstanding and fierce competitor with two boats, who most recently trumped the fleet overall in the Noakes Sydney Gold Coast Yacht Race with his Caprice 40, Chutzpah, his sixth boat by that name. Throughout those boats, he’s earned a multitude of top three places in the Sydney Hobart. Taylor knows how to build a team and his core crew have stuck by him for many years. Matt

Allen won myriad events across the period including the BWPS, Division 1 IRC and ORCi at the Australian Championships and the 2018 Festival of Sails, along with an overall win and race record in the Brisbane to Gladstone.

Tuck enjoyed a year to remember, claiming the 2018 Australian Female Sailor and Offshore Sailor of the Year awards, was a finalist in the Rolex World Sailor of the Year and received Honorary Membership to the CYCA after winning the 40,000-mile Clipper Round the World Yacht Race. Tuck was unable to attend the event, currently sailing in the Indian Ocean on board Maiden Factor on her way to Fremantle.