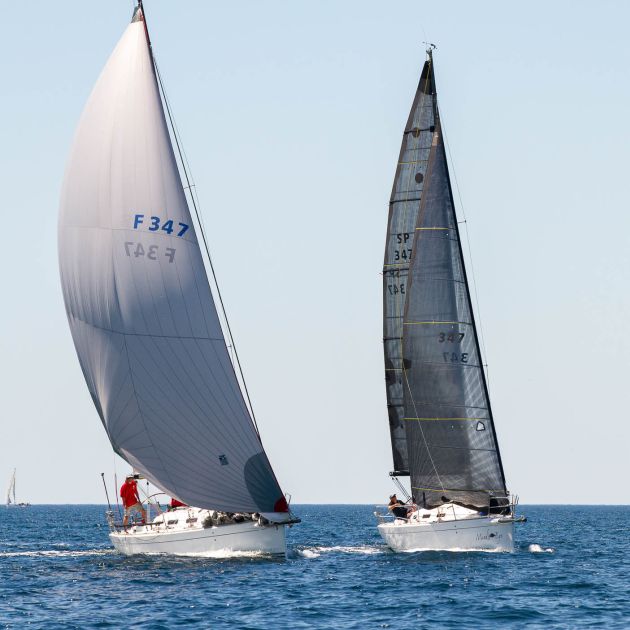 Smart sail selection by Laurie Flynn on a tight reaching leg gave him the opportunity to put Dynamic into the lead. Mind’s Eye fought back late to pip Dynamic on the line by 7 seconds. Photo Bernie Kaaks

The Bay lived up to its truculent reputation on the second day of the Club Marine Geographe Bay Race Week, teasing sailors with its variable breezes. South easterlies at the start softened and at the western end of the passage courses, giving way to a north westerly. The transition area between the two breezes was less than a mile wide, but moved from east to west and back again as the two bands of pressure fought each other.

Division 3 would be thanking their lucky stars. They sailed triangular courses at the eastern side of the competition area and sailed two races in good easterlies, returning to the marina in high spirits. Local hero Doug Lawler in the Dehler35 Twist and Shout now holds the series lead with first and second placings to back up the 4th in race 1. Next on the leader board is another local, Geographe Bay Yacht Club commodore Ken Waller in the Flying Tiger, Let’s Dance. Albany sailor Michael Cameron has the other Flying Tiger in third place.

All other divisions sailed passage races. Principal Race Officer Trevor Milton wisely decided to shorten courses, but the frustration on some boats was clearly obvious when they established a seemingly winning position, only to see it eroded by the unpredictable conditions.

Black Betty surged away from the start line but Alan Stein opted for an early gybe at the jetty marker buoy, picking up better pressure and taking over the lead. As the two painstakingly picked their way through the breeze transition area, Dirty Deeds sailed back into the easterly stream with a slight advantage to take line honours and first place. The Next Factor was second on IRC and has established itself as the boat to beat for the series.

Division 2 yachts traded places throughout their passage race. Mind’s Eye led early, but a smart sail selection on Laurie Flynne’s Dynamic put them into the lead until the final stages of the race. April Jorgensen sailed Naughty Black Shorts well away from the others and hugged the beach as they returned towards the jetty. The move paid off handsomely as she surged away to take line honours from Mind’s Eye, which headed Dynamic over the finish line by just 7 seconds. On IRC, Mind’s Eye won narrowly from Dynamic with Naughty Black Shorts third.

The first two yachts in Division 4 – the Cruising fleet – were separated by only 20 seconds. Ross McLaren’s Beneteau44.7 French Kiss headed the local Beneteau First35 Catfish. Catfish had the last laugh, taking first on handicap ahead of Peter Sim’s Fidra and Greg Kirke’s Sojourn.

Jib and Main yachts struggled all day in the light breezes, but none more so than the last placed Plan B, a Court 750 trailed to Busselton at the eleventh hour by Phil Somerville in lieu of his S&S34 Huckleberry, which suffered damage in the feeder race. Plan B fought it out to the bitter end to finish 70 minutes after the second last entry. Bunbury sailor George Mardon was first and fastest in TGV, Leonie was second and the all-female crew on the Farr40 Bird on a Wire was third.