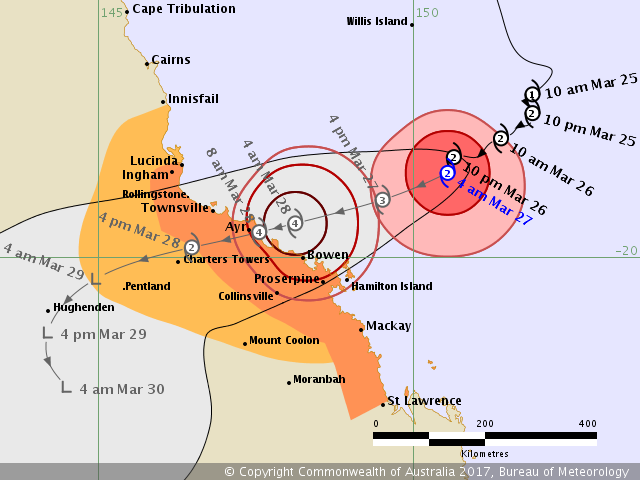 Tropical Cyclone Debbie has reached Category 2 strength and is forecast to further intensify to Category 4 strength, crossing the Queensland coast on Tuesday between Rollingstone and Proserpine.

Queensland Regional Director Bruce Gunn said this cyclone is very dangerous, and of a size not seen in Queensland since Severe Tropical Cyclone Yasi  in 2011.

“Communities between Lucinda and St Lawrence, including Townsville, Bowen and Mackay, may experience gales in the next 24 hours, with the Whitsundays and surrounding coastal islands among the first areas to be impacted,” he said.

“Storm surge is also risk factor, and if the cyclone crosses the coast around high tide this will enhance these effects. People living in coastal or low-lying areas prone to flooding should follow the advice of local emergency services and relocate while there is time.”

“Cyclone Debbie is likely to maintain cyclone strength for some distance inland towards Charters Towers, with damaging to destructive winds, delivering significant rainfall as it tracks to the west-southwest,” Mr Gunn said.

A Category 4 system is defined as one that has sustained winds in the range of 160-200kmh, with gusts up to 280kmh. Although the strongest winds are near the core, damaging and very destructive winds can extend several hundred kilometres from the cyclone’s centre.

Based on current forecasts Townsville may be impacted by Category 3 strength winds, with gusts in excess of 165kmh.

Widespread daily rainfall of up to 200mm is expected with the passage of the cyclone, with isolated falls in excess of 400mm possible along the coastal fringe. A Flood Watch is current for coastal catchments between Cardwell and Gladstone extending inland to the eastern Gulf Rivers
.
Localised flash flooding is likely, and the public is urged to stay tuned for warnings. Avoid travel when warnings are in effect, exercise caution if caught in a heavy downpour – and never walk, ride or drive through floodwaters.

Queensland Fire and Emergency Services is urging the public to:

Follow us on Twitter @BOM_Qld  and remember www.bom.gov.au  remains the most up-to-date and comprehensive official source of information.