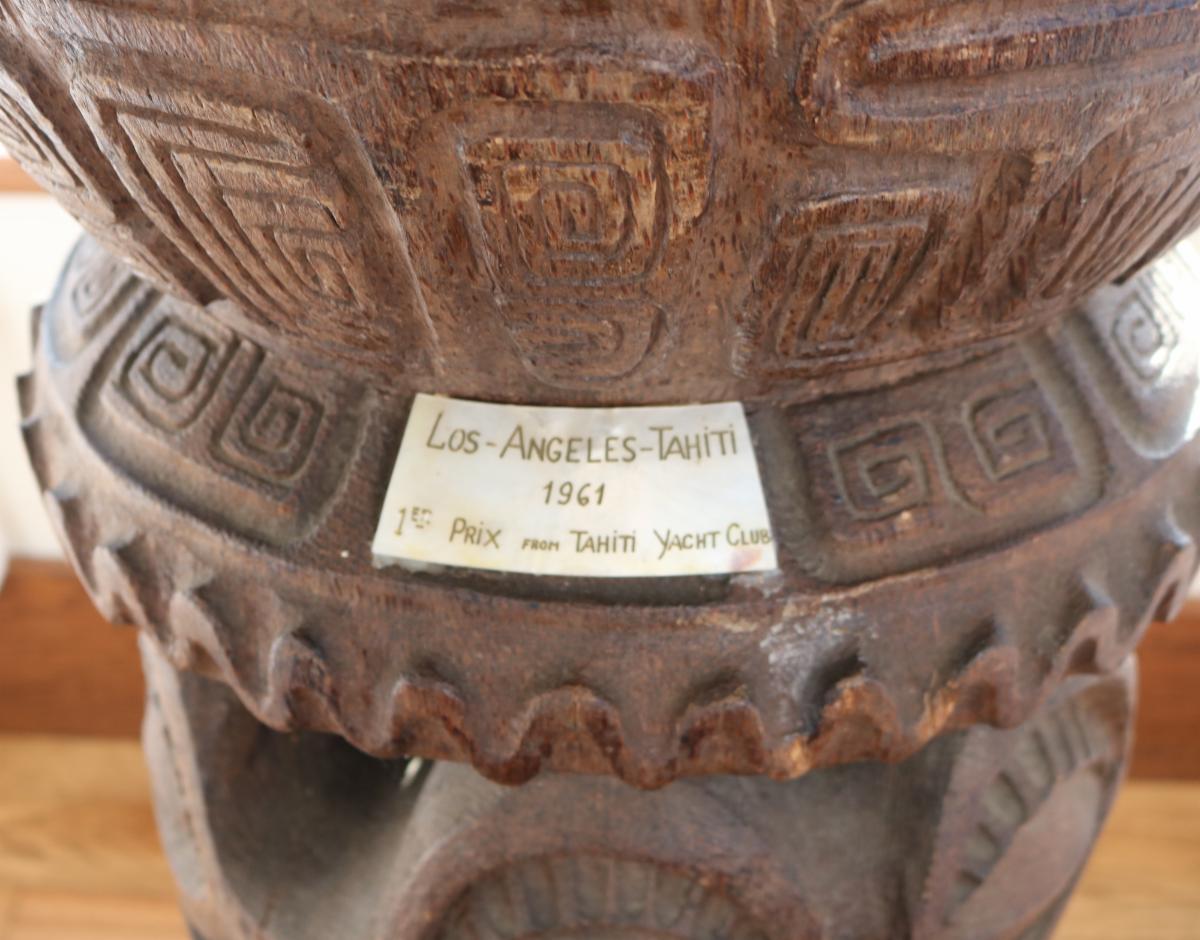 SAN FRANCISCO, CA – After organizing presentations at the Los Angeles Yacht Club in February, the Royal New Zealand Yacht Squadron (defending club of the America's Cup in Auckland) in April, and at the start of the 50th edition LA-Honolulu Transpac race in July, it is in San Francisco Bay that the co-organizers Archipelagoes and the Transpacific Yacht Club were welcomed on August 22nd at St Francis Yacht Club (StFYC) for their latest promotion of the Transpac Tahiti Race 2020.

The evening started with Kimball Livingston, past Commodore of StFYC, sharing with everyone the history of this race which started in 1925. Held at irregular intervals since, the next race in 2020 will be the 16th edition of this longest of the Pacific yacht races.

It was in 1970 that this race had the largest number of participants with 16 boats on the start line (including Eric Tabarly's Pen Duick), and so the goal of this next edition is to surpass this record. StFYC retains the beautiful carved wood trophy awarded by the Tahiti Yacht Club in 1961 to the sailing boat ATHENE, the first entry to cross the finish line after three weeks of sailing. StFYC has offered this historic trophy to Papeete to be restored and exhibited at the arrival village in June 2020.

Members of StFYC, San Francisco-based offshore sailors, sailing media personalities and potential partners from Silicon Valley were among the more than 50 invited guests at this event.

Attendees discovered the technical aspects of the 3571-mile Transpac Tahiti 2020 course, which starts with sailing on a reach from Los Angeles to head south and west to find the best option to eventually cross the tropical convergence zone of the equator. Then the challenge is to harness the power of the trade winds that will allow them a fast passage to Tahiti to cross the finish line in the Papeete pass through the lagoon.

The Transpac Tahiti 2020 will be a unique lifetime experience for offshore sailors, who can participate either by sailing with their own team on their own boat, on a boat hired for charter for their team, or by providing support as a sponsor to a boat and team so that it wears the colors and logo of their company brand.

During the event at StFYC another important facet of the race was presented: the festivities prior to the start of the race which will allow French Polynesia to shine at the departure village in Long Beach. This will be an opportunity to showcase the richness of our marine ecosystems as well as to show the historical, cultural and economic links between our societies. And after the finish on arrival in the Marina of the Port Master of Papeete, welcome festivities will be organized and boats berthed on the walkway of the marina so that the local population can also take full part in this major event of the year in 2020.

With already nine pre-registered race entries (eight monohulls and one multihull), there is a buzz of contagious enthusiasm among offshore sailors, proving the collaboration between Archipelagoes in Tahiti and the Transpacific Yacht Club in Los Angeles is keeping its promise of a dynamic renewal of this historic offshore race. Its timing is also expected to attract interest among those yachts headed to Auckland prior to the next America's Cup in 2021.

The next stop on the Transpac Tahiti 2020 promotion tour will be September 17th at the Eiffel Tower Theater in Paris during the 5th edition of the Tip & Shaft / Connect Paris business meeting event for competitive sailing, the largest in France:

An inspiring promotional video on the race is available at this link: https://youtu.be/GXNs-jH7Tac.

The Transpac Tahiti 2020 will take place It is already supported by the Ministry of Tourism, Air Tahiti Nui, the Municipality of Papeete and the Port Master of Papeete.

For more information about “Being a Part of the South Seas Legend” in the Transpac Tahiti Race 2020, visit the event's website at www.transpac-tahiti.com.