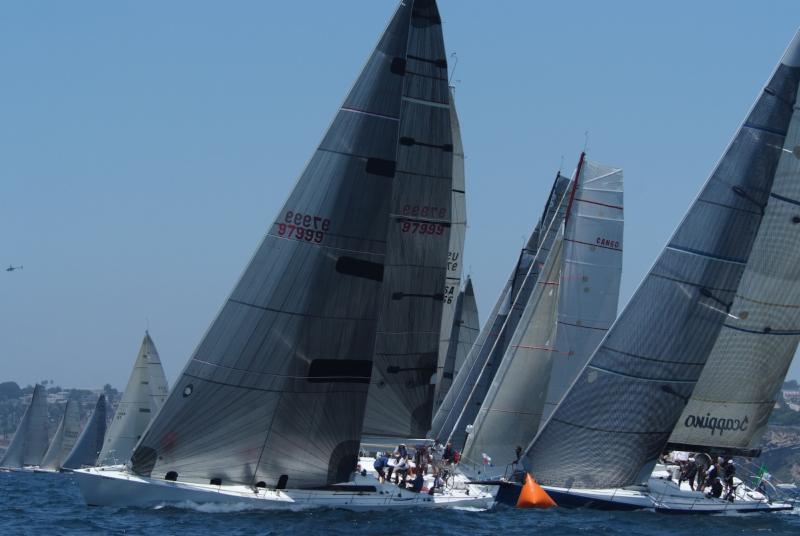 14/05/2019
LOS ANGELES, CA – The Transpacific Yacht Club is pleased to announce that its record 100-boat fleet entered in the 2019 Transpac is now split into 12 divisions for this year's 50th edition of this biennial ocean race from Los Angeles to Honolulu. These groups will be racing against each other for perpetual trophies and take-home prizes within their divisions, as well as for historic overall awards.
Boats racing in Divisions 6, 7, 8, 9, the Cal 40's and the Multihulls in Class 0A – 41 boats in all – will cross the start line at Point Fermin in Los Angeles on Wednesday, July 10th. Two days later on Friday July 12th the 28 boats in Divisions 3, 5 and the Santa Cruz 50/52's will start, and the following day on Saturday July 13th the 28 remaining monohull entries in Divisions 1 and 2, along with the 3 Multihull class 0 entries, will head towards the finish line 2225 miles away at Diamond Head in Honolulu.
Wherever possible, boats were assigned into divisions that represent similar size and type to keep the racing close and competitive, with about one-third of the entire fleet competing against peers. Division 2, for example, has ten ULDB Sleds, plus the Bill Lee-designed and built 68-foot Merlin, the boat that inspired the popular “Fast is Fun” yacht design craze based in Santa Cruz, California of the 1980's and '90's. Similarly the 11 boats racing in the Santa Cruz 50/52 class were from the same builder, albeit from different generations of design.
Seven Cal 40's, a classic Lapworth design regarded as a breakthrough design in its day, are also competing in their own class for this 50th Transpac. The first time Cal 40's competed in Transpac was soon after the design was introduced in 1964 – they won the race overall in 1965 and 1967.
And the three MOD 70's in Multihull Class 0 will be fun to follow as they make their high-speed chase for line honors.
The remainder of the fleet of monohulls and multihulls ranging in size and style from speedy Hobie 33's to the stately 70+ foot ketches in Division 5 will rely on handicap ratings generated by the ORR rating system. Using measurements of the boat, rig and sails, this VPP-based system is able to calculate the rated speed of each entry on the Transpac course model, one that uses a mixture of beating, reaching and running wind angles and wind speeds of a typical Transpac race. In this way the boats are racing against their own performance potential on the Transpac course model, and the entry with the lowest corrected time will win in each class.
The entry with the lowest corrected time in the monohull fleet will win the overall King Kalakaua Trophy, named after the Hawaiian monarch who in late 19th century inspired the founding of this race to help promote closer ties between the US mainland and Hawaii. This is one of dozens of impressive perpetual trophies and other awards awaiting the fleet after they arrive in Honolulu, with the Awards Ceremony scheduled for Friday, July 26th.
For more information on the entries and class divisions in Transpac 50, visit the Yacht Scoring website for the race at https://yachtscoring.com/emenu.cfm?eID=4758.
For more information on Transpac 50 and its history, events and sponsors, visit the main website at https://2019.transpacyc.com.
Aloha!