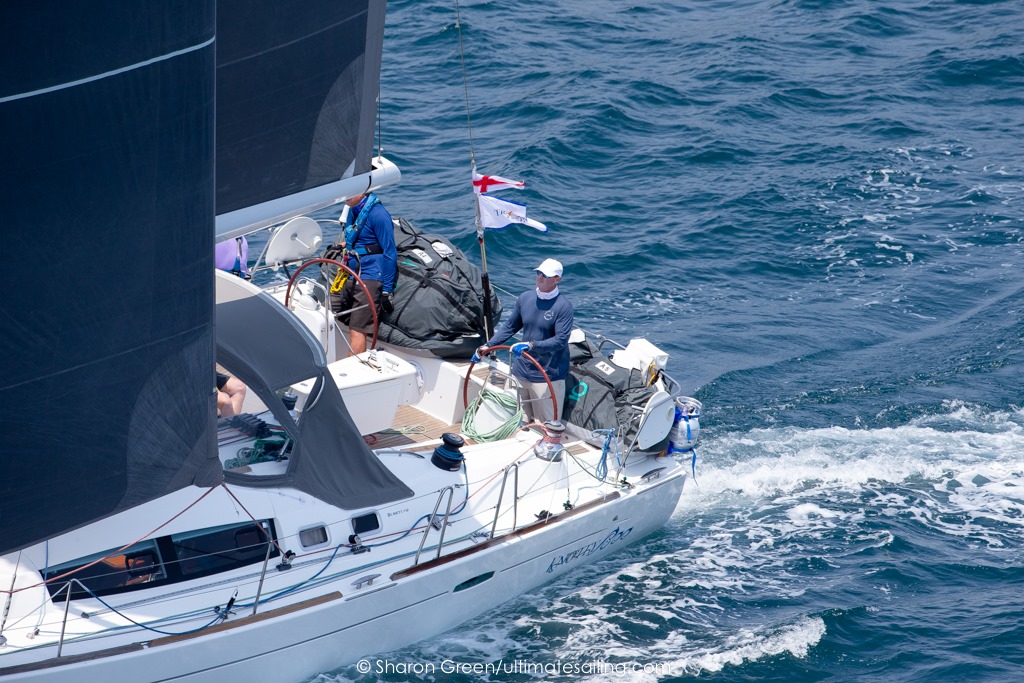 Despite undergoing some damage to their sails overnight, Brent Crawford and Jason Halloway’s Beneteau 49 Knotty Boo is still on track to finish the race in Hawaii.

The predictions of this year’s 51st edition of the biennial Transpac race from LA to Honolulu as being a fast race appear to be holding true: all teams that left the mainland starting about a week ago through the end of last week are past the halfway point in the race.

The 40 boats out on the course this year have been fortunate to have a strong stable North Pacific High pressure system to the north of the course area that is allowing them to enjoy perfect 15-20 knot winds through the majority of this race.

Nearly everyone has left the cold, overcast, hard reaching conditions of the first few days and are starting to see sunshine, running with spinnakers instead of reaching. This is the phase of the race that makes Transpac unique among other ocean races: days and days of downwind sailing that gets warmer and warmer as the islands approach on the horizon.

On board Alan Lubner’s R/P 55 Zvi they said, “The conditions are amazing with some 24-knot top speeds and only one storm cell overnight. We blew up a tack line splice right before a kite change. No damage, all souls safe on board and the crew is still pushing hard to Hawaii for some much needed tropical refreshments.”

And on Brent Crawford and Jason Halloway’s Beneteau 49 Knotty Boo there was a reminder that trade wind sailing is not always blissful, learning that occasional squalls can strike and introduce some chaos into the onboard routine. They said, “We shredded our A-2 and A-4 spinnakers last night in squalls. Also broke our Genoa. One crew set off a personal EPIRB this morning. This was inadvertent. All safe. Ignore.”

And while the ocean seems like a vast place, you have to keep out a watchful eye on this race. This is the first Transpac for Kate and Jim Murphy from Chicago who are racing on their TP 52 Callisto, and not only did they have a close pass a couple nights ago while overtaking Greg Dorn’s Dehler 46 Favonius, but they’ve encountered other traffic more recently as well.

They said, “We had two port-starboard crossings last night both within 100 meters! One was with Compadres (the Andrews 77 from Division 1) and the other with Horizon (John Shulze’s Santa Cruz 50 from Division 6).”

At her current rate of speed with 690 miles to go, Roy Disney’s turbo Volvo 70 Pyewacket would be at Diamond Head at 0700 Hawaii Standard Time on Friday July 23rd. Next across the line would be Cecil and Lynn Rossi’s Farr 57 Ho’okolohea little over 9 hours later in the afternoon. Then on Saturday and Sunday boats from all divisions will start coming in fast and furious to fill the docks over the weekend at Waikiki with Transpac sailors, their families and friends.

While COVID restrictions had prevented planning the traditional arrival parties, all teams will be guaranteed a warm Aloha welcome when they arrive.