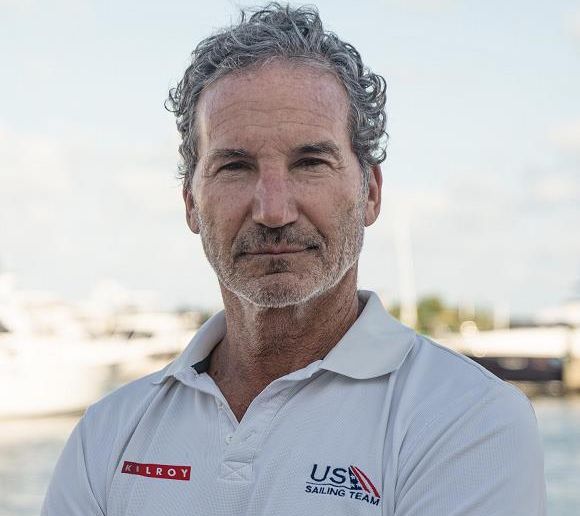 Paul Cayard will lead a group - US Sailing pic

The two successful applicants will lead the crew of the Translated 9, which will race around the world as part of the Ocean Globe Race 2023 (OGR23).

The race will commemorate the 50th anniversary of an epic competition, the Whitbread Round the World Race. The route embarks from Europe and traverses the Southern Hemisphere and will take months to complete.

What will make the new skipper and team manager’s jobs even more challenging than piloting a small craft across a vast ocean is that they will be leading a mostly novice crew — some 70 percent will be new to sailing — in a Swan 65 boat that was built in 1974, using pre-Internet technology, meaning no GPS or mobile tools for navigation or modern weather technology.

“We are happy to get to the heart of the project by starting to build the crew that will represent us in this memorable undertaking,” says Marco Trombetti, CEO of Translated, who founded the company alongside Isabelle Andrieu.

“We are looking for two professionals who want to seize this exceptional opportunity to lead a crew of brave amateurs, enthusiasts and dreamers as they navigate the world.”

Besides extensive nautical experience, the ideal skipper and team manager will possess a great sense of adventure and desire to lead. The perks of the job include being part of a historic race and milestone event that embodies the best of humankind through dedication, courage and endurance.

The skipper and team manager will help select and train the new crew which will take place in two continents. The job starts in early summer with crew selection and training off the coast of Rome, to build teamwork, experience, and reach the qualifying nautical miles necessary to participate in the regatta.

Another group will train starting in September on a twin boat moored on the coast of San Francisco, led by legendary sailor Paul Cayard.

Rome-based Translated wants to field a crew that represents the world of translation, spanning localization experts, translators, linguists and executives involved in global markets. The unifying feature will be that the crew shares a desire to build bridges between cultures and lift language barriers.

“This two-pronged training program on opposite sides of the globe will ensure that all members of the localization community who wish to join the project can participate,” Trombetti says.

The skipper and team manager’s positions will last for approximately three years, as the race finishes in April 2024. The novice men and women who join the crew will be on board for approximately 50-day legs, making the job an ideal work sabbatical.

“Our experience is that symbiosis between humans and technology is not only possible, but creates quality and wealth for everyone involved,” Trombetti said.

“With this regatta, we want to show that people will always remain central to translation and that even without technology, thanks purely to values and qualities that are exclusively and exquisitely human, we can achieve exceptional results together.”

Interested parties can apply via:https://translated.com/9 by clicking the ‘Join the crew’ button on the home page through June 15 to fill out a questionnaire and post a resume.