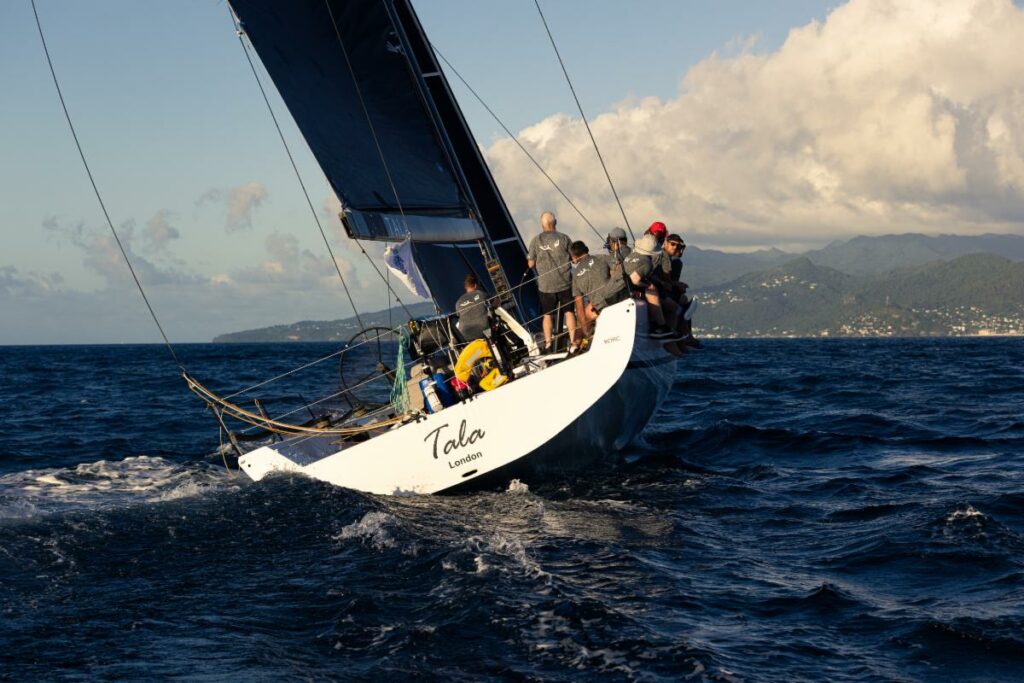 Tala crossed the finish line in Grenada after the closest battle in the eight-year history of the race. Pic - Arthur Daniel/RORC 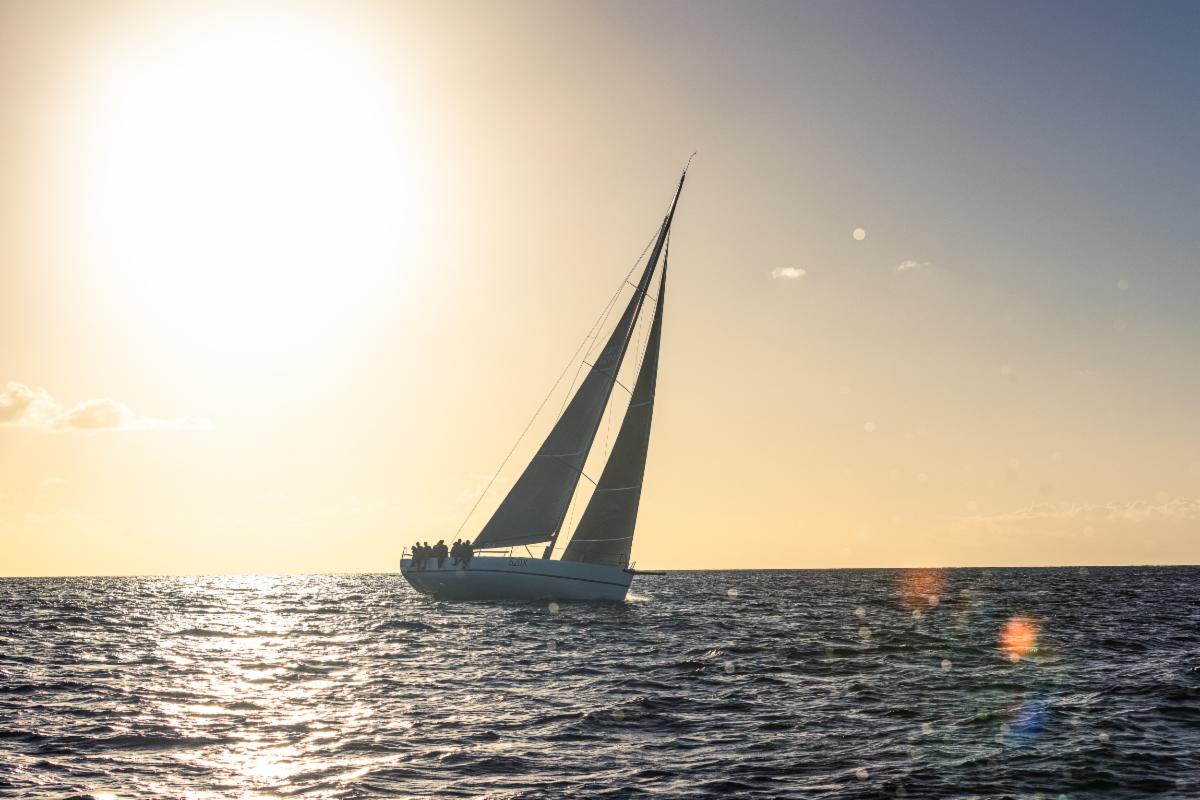 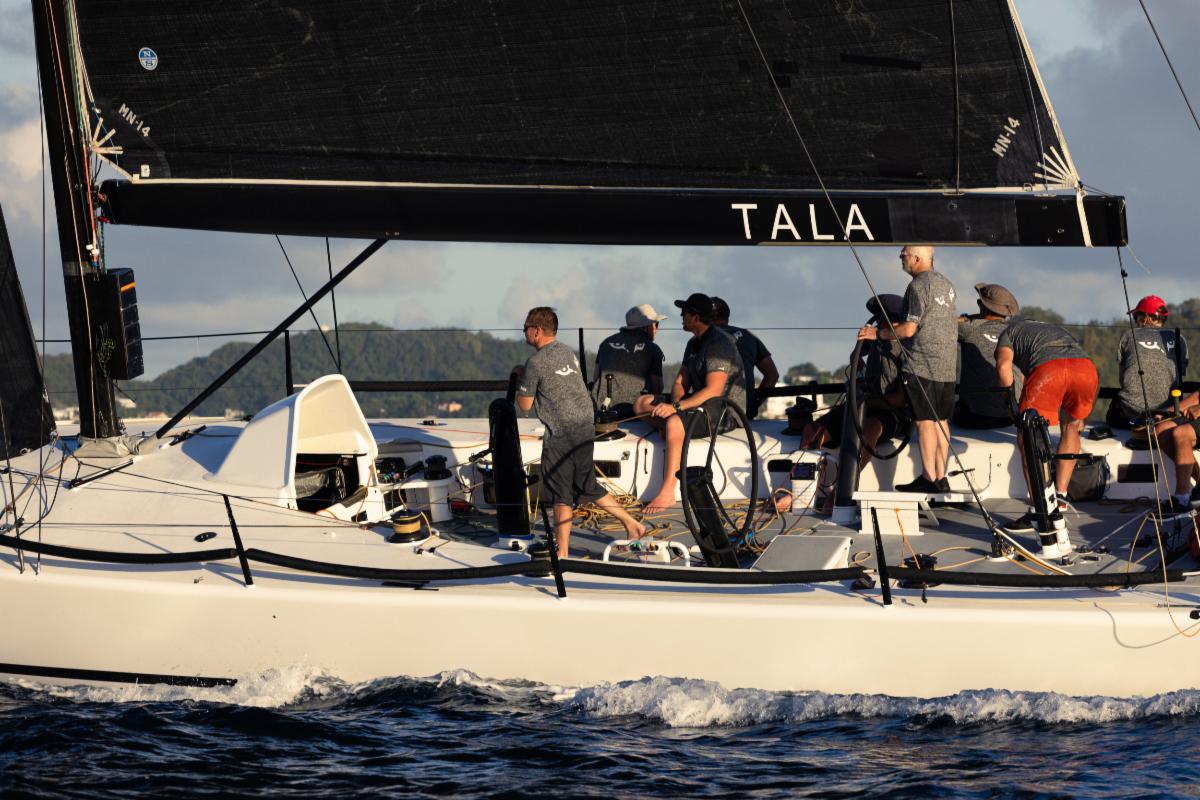 Tala cross the finish line of the 2022 RORC Transatlantic Race after a close battle for IRC Zero. Pic - Arthur Daniel/RORC 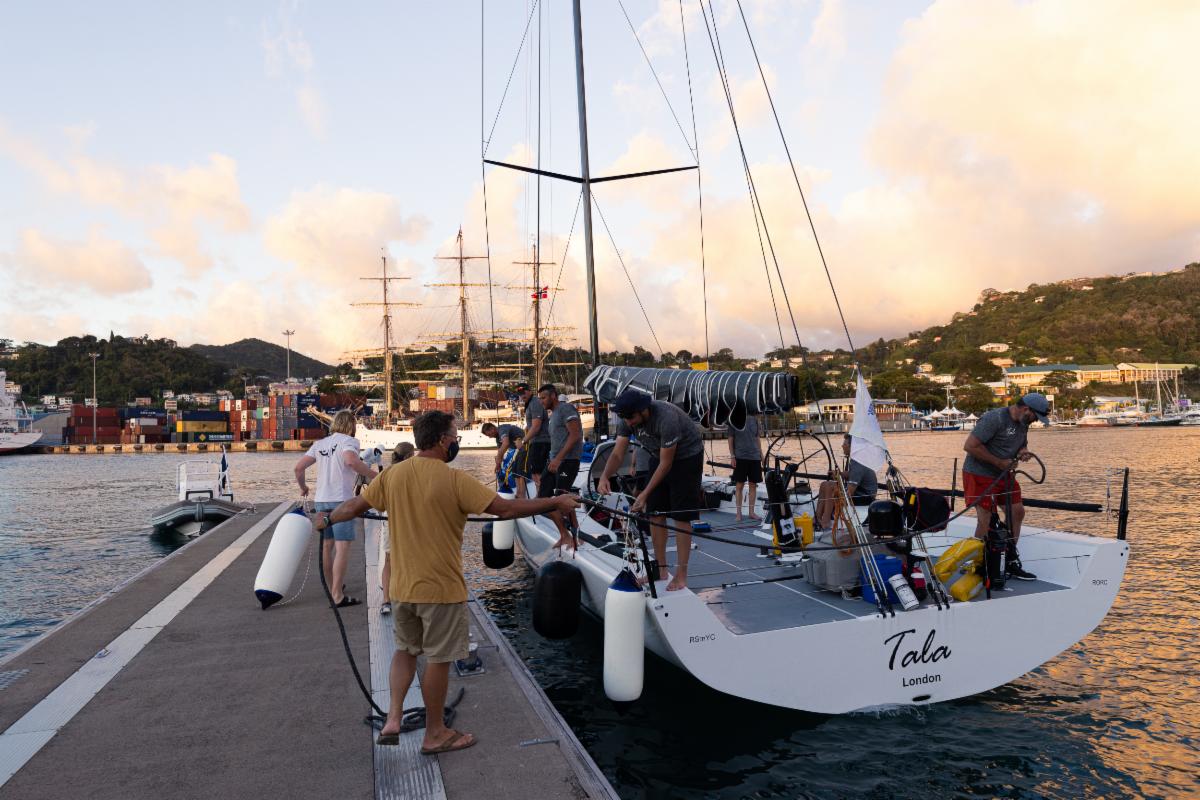 The team at Port Louis were on the dock to welcome Tala. Pic - Arthur Daniel/RORC 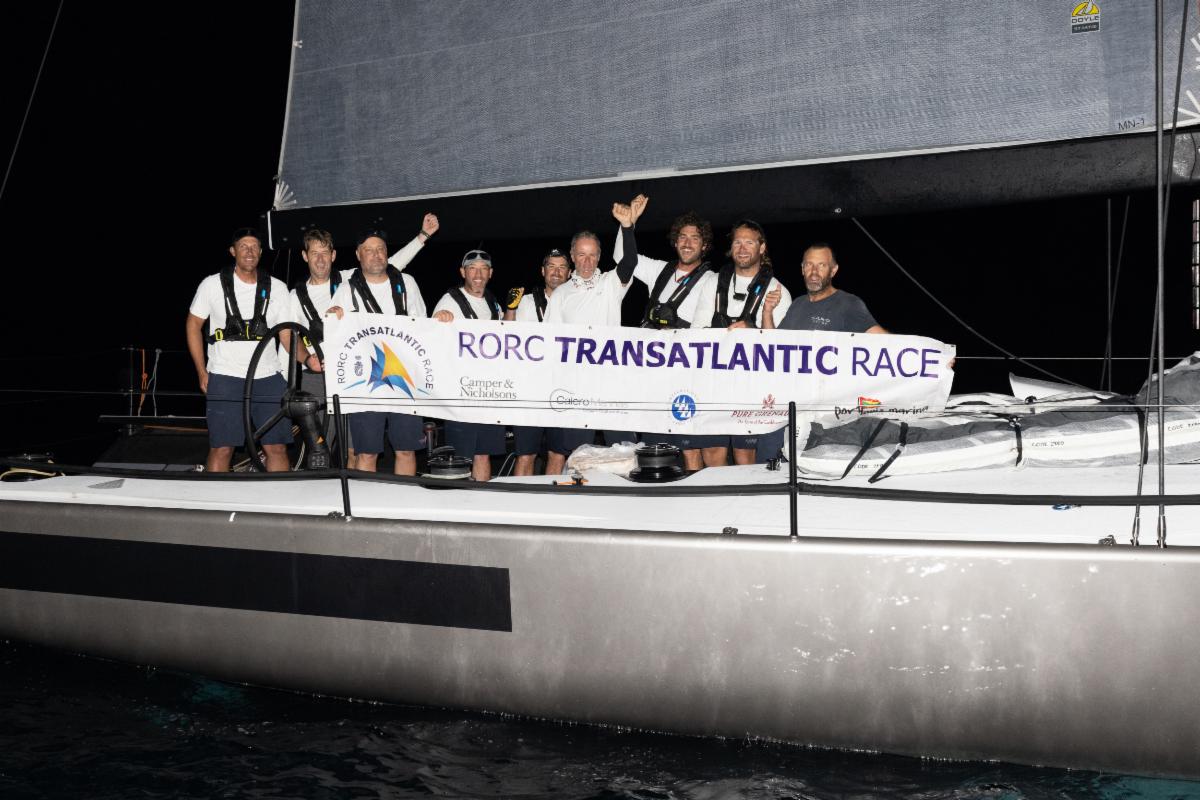 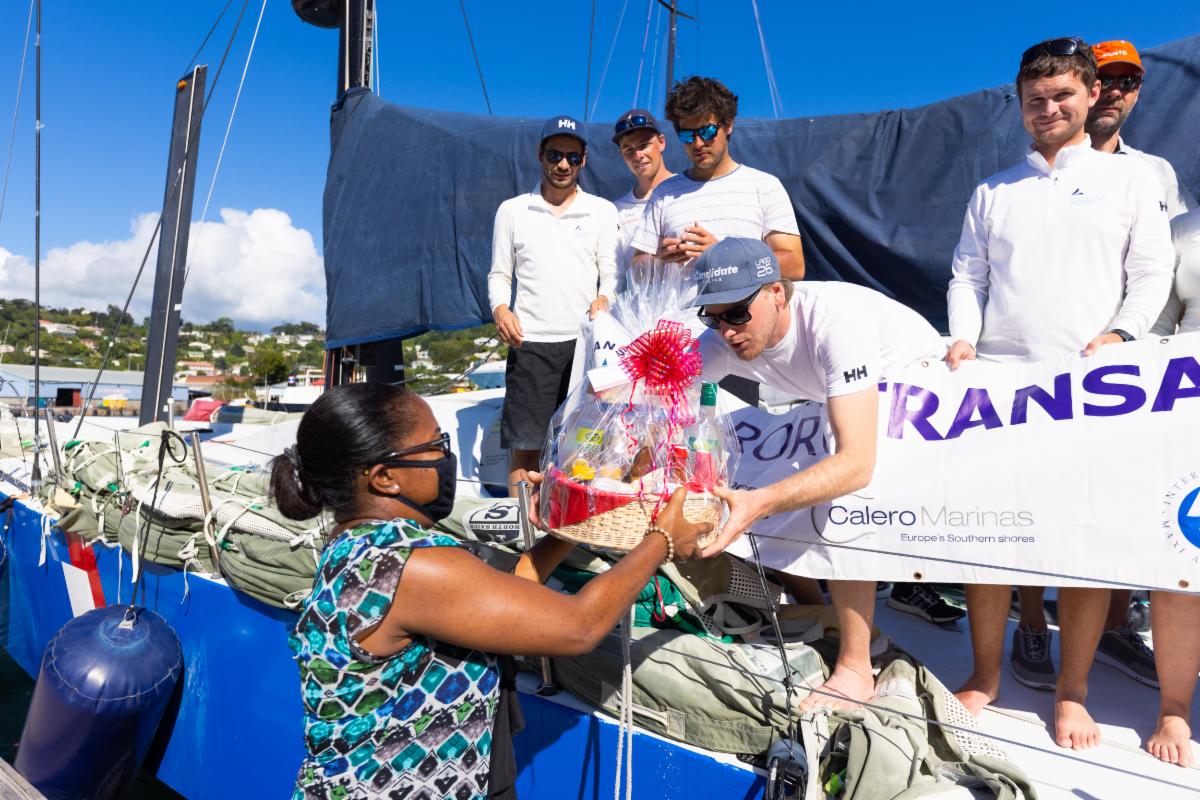 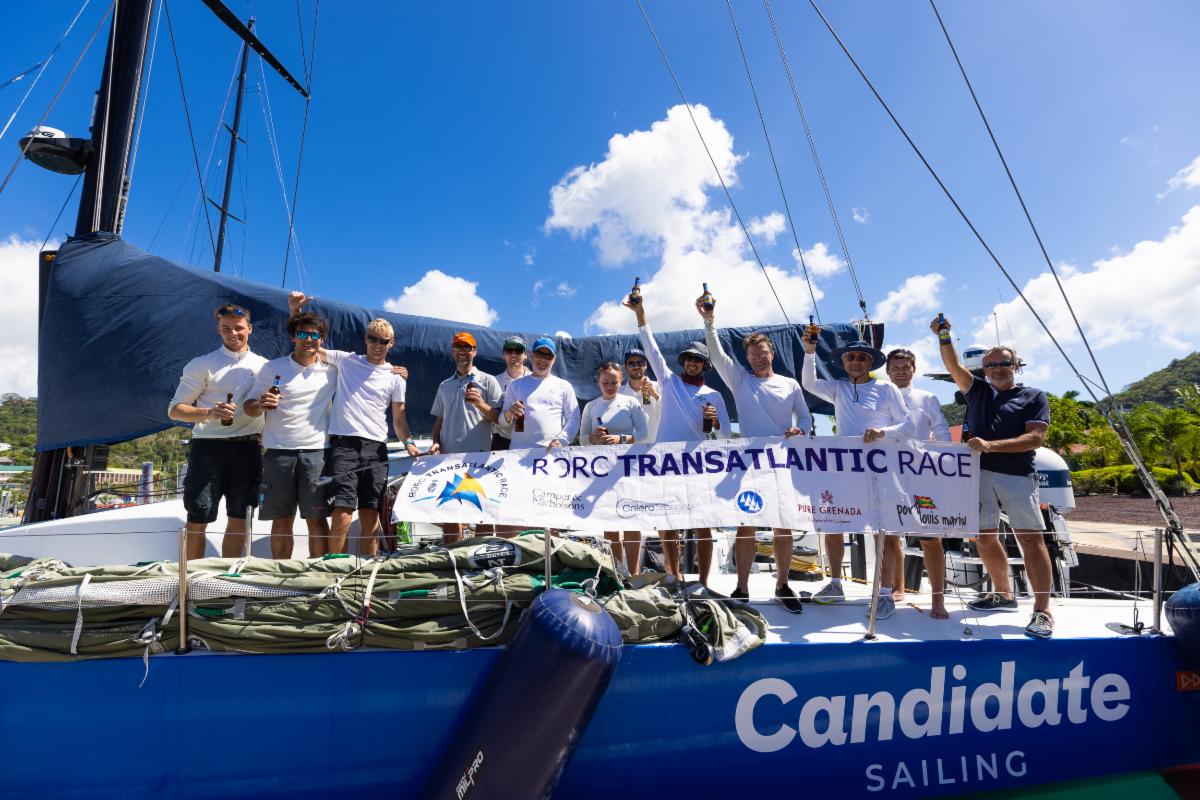 Billed as the closest battle within the record fleet for the 2022 RORC Transatlantic Race, IRC Zero did not disappoint. The dismasting of Botin 56 Black Pearl (GER), which has safely made landfall in the Canaries, resulted in two hi-tech fifty-footers battling for the class and overall win.

Tala has won IRC Zero, completing the course in an elapsed time of 11 days 10 hours 13 minutes 9 seconds. Tala is also ranked second overall, just over an hour behind the mighty Comanche after IRC time correction. Caro was just an hour behind Tala on the water – a virtual photo-finish after over 3,000nm of racing. Caro is a new Botin design taking part in only its second race and the first transatlantic. Caro is second in IRC Zero and third overall. Despite being disappointed not to win, the Caro team raised a cheer having completed the race. Caro and Tala are relishing the next battle, which will be in February at the RORC Caribbean 600.

Tala is the first modified TP52 to even attempt the RORC Transatlantic Race, let alone win class, and is believed to be the first of its kind to complete a west-to-east race Transatlantic race. Tala has been a familiar competitor for the RORC for several years. However, the boat was specifically modified for the race.

Tala’s skipper and owner David Collins spoke dockside: “It all started when Pete Redmond (Tala crew) jokingly said let’s do the RORC Transatlantic Race and I said ‘why not?’ We have always dreamed of sending-it downwind for days, so I decided to do this race and then the RORC Caribbean 600.”

Once the decision to race was made, Tala was modified in her home port of Hamble UK, specifically for additional waterproofing. Work included making a bespoke main hatch enclosure and additional bilge pumps below decks. Tala was then sailed over 1,500nm to Lanzarote for the start.

“We did get to send it for a few days at the start and we enjoyed it,” continued David Collins. “A low-pressure system affected the race and our fleet had different views about what to do. Black Pearl went south and Caro to the north. Tala’s navigator, Campbell Field didn’t like the extra distance around the top, but we wanted the slingshot from the system, so he took the decision to just skirt the low, punching through the pressure band on the way in.”

Tala’s course was the most direct, but it meant the team and the boat would experience big conditions with 35 knots and confused seas and an erratic wind direction.

“Tala is a good boat, but she suffered. We were very confident that she would be able to cope with the conditions, but unfortunately the electronics on board were taken out by the water ingress. We lost just about all the electrical systems, including the YB Tracker, our ability to download weather data and the position of other boats. We were becalmed for a while, but we then reached out on a good shift and came powering out of the low into the trade winds.”

With the electronics compromised, Tala was effectively racing by compass and the weather they could eye-ball. The team had no information on their big rival Caro, as David Collins explains.

“We were utterly unaware of the position of any other boat. We were getting no weather reports either,” continued David. “We didn’t know` where Caro was until we got in cell phone range off Grenada. “When we found out Caro was behind us, we were astonished. My bet was they were 20 miles ahead, especially as we had a shocking final 24 hours. We made two back downs and Robbie (Southwell) as a swimmer, trying to clear weed from our rudder. I was really down, but then elated to find out that we had got the win.

“It was really nip and tuck with Caro and I am very sentimental about this race. Sometimes you get a great boat like Tala and you just want to do it justice. Tala is a cracking boat, a joy to sail but now it’s time to go back to my wife and two kids! We have a lot of work to get ready for the RORC Caribbean 600, but I am sure the lads will do it. The RORC have done a brilliant job organising this race, it has been a great experience. A massive think you to the Tala crew, they are a solid bunch of lads and we will enjoy a couple of days in Grenada.”

The Austrian Ocean Race Project’s VO65 Sisi (AUT), like Volvo Open 70 I Love Poland (POL) is another young team with ambitions for The Ocean Race. Sisi completed the RORC Transatlantic Race in an elapsed time of 11 days 4 hours 43 minutes 29 seconds.