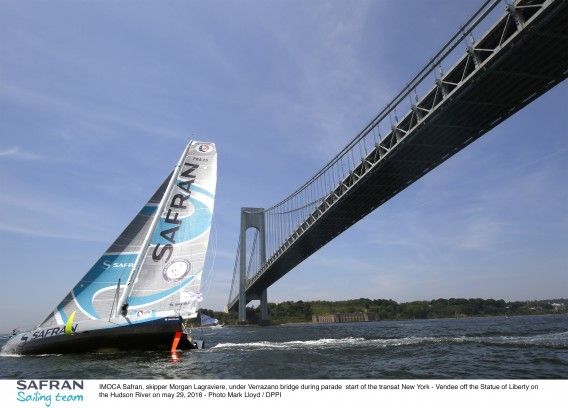 Morgan Lagravière will cross the starting line of the Transat New York-Vendée, his first transatlantic race on Safran, on Sunday at 21:30 (French time), after a parade in front of the North Cove Marina that began at 17:00. The youngest skipper in the race has been looking forward to passing Ambrose Light, the mark for the start, for a long time.

Most of the 14 solo skippers in the race have only had a few chances to compete in Vendée Globe conditions. But for Morgan Lagravière, who has just turned 29 years old, the start of this transat feels like a debut that he has been anticipating for months. As he left the dock, it was not easy for him to restrain his competitive nature: “After all the work that's been done in the build-up to this, now I really want to test myself and compete with the others,” the skipper of Safran said. “We're all systems go and I'm feeling confident. It's also the race that will allow us to see where we are before the Vendée Globe, so it will, of course, be full of lessons.”

Strength and composure right to the finish

The young skipper, who has a powerful, foiling and latest generation boat, has shown how fast he learns, be it in the Olympics or the Figaro. That ability is his trump card for catching up with the favourites, who have had more time on their boats. The high-level of the competition does not worry Lagravière, who will rely on his intuition. It is a long course and whilst it is tempting to put everything into the early stages, the skipper of Safran has already made clear that his primary goal is to finish the race, maintaining strength and composure right to the finish: “It's like a foot race, you don’t start a marathon with a sprint,” he said. “I will have to be sure to manage the different phases of the race. I’ll need to get used to the different situations and the duration, in addition to the food and sleep management. The goal is to get to Les Sables d'Olonne and do as well as possible.”

With New York Bay being exceptionally sheltered, it will be a rather “quiet” start, but that will give way to more challenging conditions from tomorrow, before the arrival of a first front on Tuesday. Roland Jourdain gave this analysis, hours before the start: “It's a nice scenario in front of the sailors. The relatively weak wind at the start should strengthen and there could be an ‘Olympic downhill’. In a west-east transat, the principle is: the faster you go, the more chance you have of staying with the depressions with you. Lagravière will need to stay on the safe side and make some great manoeuvres, but he’s a competitor and he'll get himself into the race.”

If this 3,170-mile transat, from west to east, benefits from downwind conditions, as should be the case at this time of the year, it could be a particularly fast one.