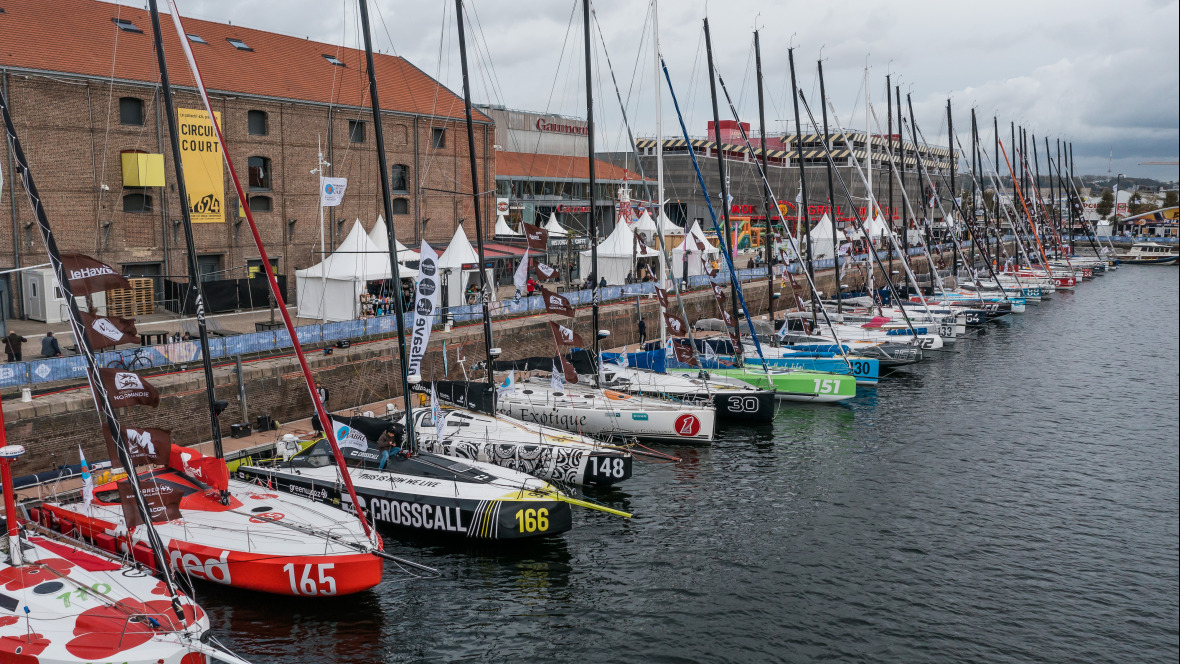 The monohulls make up the largest fleets in this year’s Transat Jacques Vabre race.

Lining up on the start line will be 22 60 foot IMOCAs and 45 Class40 boats. We asked the skippers for their race favourites.

It’s an exceptional number of IMOCA entries for a post-Vendée Globe year (there were only 13 in 2017), and performance is expected to be high. Many of the boats and skippers have recently returned from round-the-world trips, so the sailors will know their boats well and have them fine-tuned already. There are also some formidable partnerships on board. Winning this double-handed transatlantic race will not be easy.

Title-holder Charlie Dalin returns to the Transat Jacques Vabre race, known as the coffee route race, aboard Apivia, accompanied by Paul Meilhat. The duo, formed at the start of 2021 and impressed many by winning two pre-season races and showing off some great boat handling. They’re backed up by careful preparation and are a solid pair who complement each other well.  Coupled with this successful boat Dalin and Meilhat go into the race as favourites to retain their title.

Several crews are hot on their heels. “Apivia is ahead but LinkedOut and Charal should not be far behind,” said Sam Goodchild, skipper of Leyton (Ocean Fifty),

Indeed, Thomas Rouillard and Morgan Lagravière, are looking strong in their LinkedOut boat, whilst Charal raced by Jérémie Beyou and Christopher Pratt continues to put in some very good performances on the water.

Ignore the newest boat in the fleet at your peril. The recently built 11th Hour Racing Team boat, Mālama (it means ‘careful’ in Hawaiian) is skippered by Charlie Enright (USA) and Pascal Bidégorry. Despite little preparation and testing time it’s being watched closely by their opponents. “It’s the Imoca that impresses us the most,” admits Yannick Bestaven and Jean-Marie Dauris. Their Maître Coq IV, winner of the Vendée Globe a year ago, is also one to watch in the coming weeks.

We shouldn’t write-off some of the older IMOCAs though. There’s 11th Hour Racing Team’s second boat Alaka’I, with the hugely experienced Justine Mettraux (SUI) and Simon Fisher (GBR) on board. The boat finished second for Alex Thomson in the 2016 Vendee Globe.

Initiatives-Coeur skippered by Sam Davies (GBR) and Nico Lunven is always a threat to the leaders. “It would give me great pleasure to see Samantha Davies win in Imoca,” said Mathieu Crépel, co-skipper of Everial (Class40).

So although we have a firm favourite in Apivia there are so many well-tested boats driven by hugely experienced skippers that the race remains wide open. After all, it’s a long way to Martinique!

With the largest Class 40 fleet in the history of the race picking a winner is virtually impossible. Sébastien Rogues, skipper of Primonial (Ocean Fifty class), agrees: “There are 15 boats that can make the podium, the fight will be exciting, they’ll have a blast”. By that measure, one in three boats could make the podium in Fort-de-France.

When skippers are pressed to choose a possible winner the same names tend to come up; Crédit Mutuel, the 2019 race winner, still skippered by Ian Lipinski and Julien Pulvé, Redman, the leading boat in this year’s Class 40 championship sailed by Antoine Carpentier and Pablo Santurde del Arco and Rescue Ocean Project, winner this spring of the Normandy Channel Race, with the duo Axel Tréhin and Frédéric Denis at the helm.

Other teams mentioned as potential winners include Lamotte Module Création, Banque du Léman and E. Leclerc Ville-la-Grand. Ultime co-skipper Anthony Marchand sad, “I can see a Class 40 arriving first in Martinique … or maybe an Ocean Fifty, but for sure the first boat home will be between these two classes.”