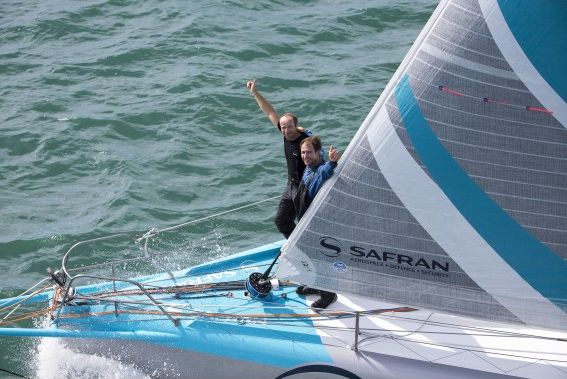 This Sunday, October 25, Morgan Lagravière and Nicolas Lunven will be on the start-line in Le Havre for their first Transat Jacques Vabre. The quality of the IMOCA fleet is exceptional, with 20 boats entered and a good half of them, including the Safran duo, able to aim realistically for a podium finish. Beyond the sporting result, the showdown promises to be instructive with a year to the Vendée Globe.

The boats: the clash of generations

With 5,400 miles to cover between Le Havre (France) and Itajaí (Brazil), the Transat Jacques Vabre will allow for a judgement of the offshore performance, over a long period of time, of the five latest generation IMOCA equipped with foils, including Safran.

“Of course we’re going to closely monitor the other foilers (Banque Populaire, Edmond de Rothschild, St-Michel Virbac and Hugo Boss), to see if our choices are going in the right direction,” Morgan Lagravière said. “But we will not focus solely on that, we’ll watch the whole fleet as well, starting with the best boats from the previous generation with straight daggerboards. Handled by experienced skippers, these proven machines have reached a high level of maturity.”

“These duos dominated the preparation races and training camps in Port-la-Forêt. On paper, they are the favourites from a purely technical point of view,” Lagravière said. “But the format of the Transat Jacques Vabre is different. It’s a long race and other ingredients impact on performance, like fatigue management, the harmony of the duo, the big strategic choices and the reliability factor.. This race is very open, almost everybody has a chance. It’s difficult to make predictions, but one thing is for sure: it’ll be an exciting race, both for the skippers and the public.”

The profiles of the sailors taking part in the event are varied. There are the very experienced skippers like Michel Desjoyeaux, Kito de Pavant, Bertrand de Broc and also Marc Guillemot, the former skipper of Safran, who is participating in his tenth Transat Jacques Vabre. In addition to these mainstays, we will see the new kids on the IMOCA block, like Morgan Lagravière and the other rookies in next year’s Vendée Globe: Paul Meilhat, Thomas Ruyant, Eric Bellion, Nicolas Boidevezi and Fabrice Amedeo.

“These sailors have different characters, experiences, skills and vision,” Lagravière said. “But we’ll all be on the same start-line with similar objectives and levels of performance. With Nico, our margin of progress is more important than for the others because our boat is part of the latest generation launched. We’ll aim to raise our level throughout the race.”

Morgan Lagravière and Nicolas Lunven will compensate for their lack of experience in the IMOCA with their motivation and unrelenting energy.

“Our position as rookies is interesting,” Lagravière said, “it creates the spark, the excitement, that makes you want to excel and to find incredible energy. We have a fresh outlook and we’re going without preconceptions. Handling an IMOCA is like a maths problem: If they give you the solution right away, you forget it quickly, but if you try to find the solution for yourself, you take it in better and what you learn lasts longer.”