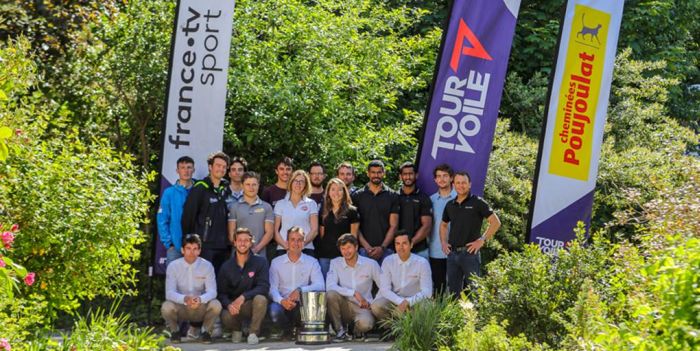 After more than 40 years existence and a renewal with the arrival of the Diam 24s, the Tour Voile continues to cement its place as a major sporting event of the summer.

Always on the move, the event will be showing itself in a new light with the addition of a mixed classification for the 2019 edition. It will be open to teams which, for each race, include at least one female crew member. Although women have always taken part in the Tour Voile, the launch of this classification will make it possible to shed greater light on the talents of women who are picking up the gauntlet along France’s coasts in increasingly greater numbers.

The Tour Voile will also be reintroducing territorial identifications into the heat of the battle. As a result, on their masts, each team will be displaying the name of its home town, city or region. This will help the spectators to identify more easily and encourage the teams of their region. Between the teams, it is also an opportunity to create a notion of “friendly rivalry and local pride, which is a not insignificant part of the Tour Voile’s DNA,” as Tour Voile Director Jean-Baptiste Durier likes to remind.

Each year, the Tour Voile attracts sailors from all horizons, from both off-shore and in-shore racing and from the professional as well as amateur ranks, which is the event’s distinguishing feature. These sailors dare to take on and challenge their peers in a mixed format which, by definition, is very difficult to ultimately tame in every single one of its aspects.

In 2019, approximately 25 teams representing five nationalities will take part in the competition. In their ranks, there will be sailors with major experience on the best international circuits such as Mathilde Géron (La Boulangère), a former leading light of the French Olympic team, Pierre Pennec (EFG Private Bank Monaco), who forged his reputation in the Extreme Sailing Series and Olympic sailing, as well as 49er world champion Stevie Morrison (Renaissance Services). These sailors will be testing themselves against each other and against the new generation represented by crews such as Cheminées Poujoulat, skippered by Robin Follin and coached by Switzerland’s Bernard Stamm, or also Team Réseau IXIO, led by Sandro Lacan and defending champion Tim Mourniac.

International crews will also be present, such as Pink Lady, flying the European flag, as will the seasoned amateurs and the most loyal women’s teams to the Tour Voile, like Batystil Habitat skippered by Cyrille Legloahec and Helvetia Purple by Normandy Elite Team led by Pauline Courtois. The broad and extremely varied field for this 42nd edition is a perfect reflection of the Tour Voile’s attractiveness.

A PRE-SEASON FULL OF PROMISE

As from this year, the Tour Voile test events, numbering five in total, have taken place under the “Tour Voile Series” banner. In this way, the crews have been offered a veritable race programme and the sponsors have benefitted form longer-term visibility. Following the Grande-Motte, Atlantique and Guyader Grands Prix, the Beijaflore crew led by Valentin Bellet has taken command of the championship, ahead of Cheminées Poujoulat skippered by Robin Follin and Team Réseau IXIO captained by Sandro Lacan and Tim Mourniac, all of whom are formidable pretenders to the Tour Voile crown up for grabs at the Super Final in Nice on 21st July!

The Tour Voile Base will again put the spectators at the heart of the sport. In the Paddock, the public will be able to get up close to the preparation of the crews and Diam 24ODs by watching the launches and outings of the boats, with live commentary.

It will also be an opportunity to discover the race from behind the scenes and meet sailors who are always happy to talk about their passion. The day’s winners will have pride of place at ‘The Spot’.

The Spectator Zone, with its unbeatable view of the races, will allow the public to follow the battles on the water blow-by-blow and to understand the stakes of the race thanks to live commentary throughout the day. Many other activities are proposed by the event’s partners, including a driving simulator set up by Réseau IXIO, cocktails offered by Caraibos and the Journal de Mickey magazine available for children.

Thousands of prizes, including a smartphone, can be won every day thanks to the Pass K’do competition, by choosing your favourite team. Awareness-raising will also target the growing number of spectators for each act concerning one of the current major environmental causes: preservation of water. The Water Family association will not only be very visible on the spinnakers of the Diam 24s. It will also meet the public, and especially children, at the Tour Voile Base to help them understand the essential ways in which to preserve water quality.