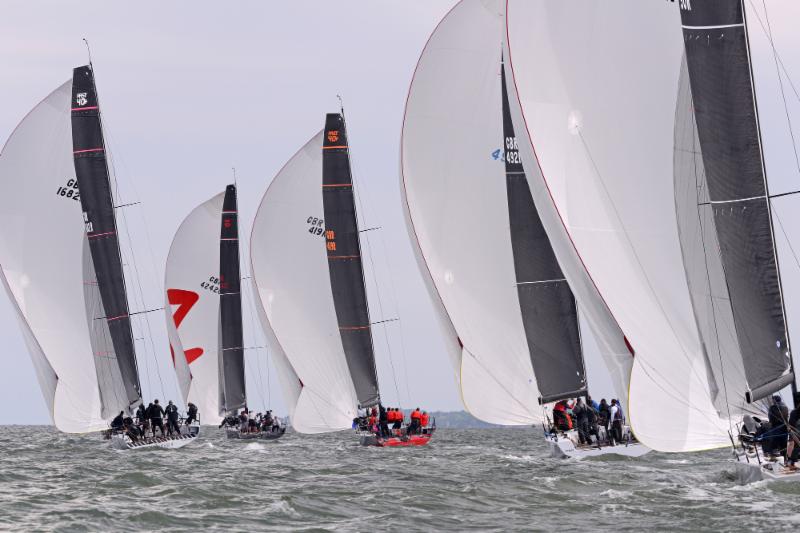 The opening day of the Vice Admiral's Cup served up light airs, with big shifts and wind reversals that challenged competitors and race officials alike – a quiet morning quickly giving way to an afternoon that started with fast-paced action on both course areas.

The first start was for the J/111 and J/109 classes in a very shifty southwesterly of 10-12 knots that created plenty of tactical challenges in a tight race with a short 0.8 mile windward leg. The fleet strongly favoured the committee boat end of the line and the first start was abandoned with 40 seconds to go.

In the restart, the fleet was more spaced out, with Cornel Riklin's J/111 Jitterbug closest to the pin end of the line. Both Simon Bamford's Kestrel and Joerg Sigg's Lallekonig appeared well placed mid-line, but the former was OCS.

It was an intense race for the J/111s, with two laps completed in only 35 minutes, and the first five boats finishing just 69 seconds apart. Joerg Sigg's Swiss Lallekonig took victory, 20 seconds ahead of Tony Mack's McFly, with Cornel Riklin's Jitterbug third.

Next away was the HP30 class, which again saw intense competition and on such a short course a good start was imperative. Tim Cunliffe's Farr 30 Insatiable was almost alone mid line, while most of the fleet again stacked up at the committee boat.

Sture Wilkman's Swedish MC31 Vitres and Malcolm Wootton's Farr 30 Pegasus both jumped the gun and had to return, leaving Jamie Rankin's Farr 280 Pandemonium looking best placed in the early part of the race.

Glyn Lock's Farr 280 Toucan and Insatiable rounded the second windward mark simultaneously, with the former inside and therefore gaining a narrow lead at the spreader mark. They were followed closely by Pegasus, Virtres and Pandemonium.

Unfortunately, the best wind of the day proved to be short-lived, so by the time the leaders were reaching, the finish the breeze had dropped to only six knots and even less in some big holes.

Nevertheless, Toucan pulled out an impressive lead on the final leg, finishing more than two minutes ahead of Insatiable, with Pegasus taking third on the water just three seconds later. Toucan's lead was sufficient to retain the lead after time correction.

The SB20 fleet also raced on the same course, but spent proportionately more time in the lighter winds. Lizzie Farrington's Sail Navy started mid-line with a half-length advantage on the boats nearby, while Robin Kirby's Carnage also looked well placed close to the committee boat.

However, Farrington was racing with a new crew of naval ratings who had not previously sailed an SB20 and Kirby retired. Christian Sutherland's Reach Around took victory a good margin ahead of Charlie Whelan's Breaking Bod and Charles Sheppard's Sharc.

The Fast 40+ class was first away for the second start line, with a 1.3 mile windward leg on a course axis of 260 degrees. Tony Dickin's Jubilee led the fleet at the first windward mark, 20 seconds ahead of Filip Engelbert's Elvis. Steve Cowie's Zephyr rounded next, 27 seconds later, followed closely by Niklas Zennstrom's Ran.

By the time the wind eased on the final run, Ran had pulled out a good lead. Meanwhile, having rounding the last mark uncharacteristically far back in the fleet, Peter Morton's Girls on Film gybed toward the northern corner of the course, well clear of her competitors.

For a while it looked as though this might work, but as Ran closed the finish a very light south-easterly breeze re-established and Girls on Film again slipped backwards down the rankings.

Ed Fishwick's Redshift was second on the water, a couple of minutes adrift of Ran, and Zephyr third 67 seconds later. With only one point of rating difference between the three boats, they retained these positions on corrected time.

The Quarter Ton class had a long race for their first day, taking 1 hour 20 minutes in extremely fluky winds. Nevertheless Ian Southworth's Protis, Sam Laidlaw's Aquilla and Louise Morton's Bullet had a close tussle all the way around the course.

Southworth held a one-length lead over Aquilla at the end of the second 0.9 mile beat, with Bullet following close behind, ahead of Tom Hill's Belinda. On the final leg he extended the lead to 44 seconds, taking both line honours and victory on corrected time.

Bullet crossed the line second, just ahead of Aguila, but fell to third on corrected time, while Tony Hayward's Blackfun moved from the back of the fleet up to fourth on the water.

“it was a tough, light airs Solent mixer and the team did very well to get a race in,” Southworth said. “We changed places a number of times – it was nip and tuck all the way with Aguila and Bullet – very interesting racing and we're all looking forward to tomorrow.”

With the south-easterly breeze subsequently stalling, racing was abandoned for the day at 1620. Tomorrow promises a more consistent north-north westerly breeze.