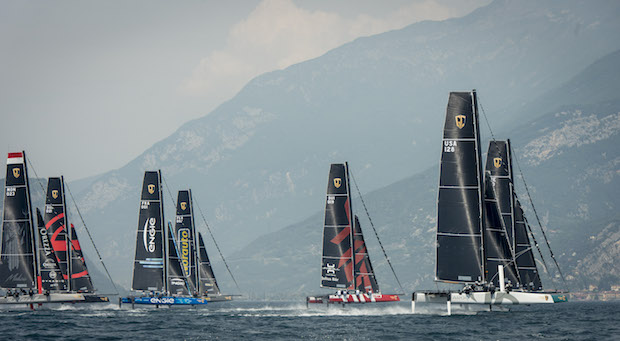 With nine boats on the course, it’s a new game, but one that has the crews – both amateur and professional – enthralled by the competition and the sheer amount of high quality racing. Six races a day was perhaps even a bit too much for Glenn Ashby, the Olympic medallist racing on board Team Tilt. “All the boys are under 30 except for me,” grinned the 38 year old. “Maybe one less race would be nice. But good fun out there, the last two days have been great sailing.”

The Swiss crew skippered by Sebastien Schneiter swept the board in the first three races, winning all three. But they were struggling to keep Franck Cammas and Norauto at bay. “They’re a lot more practised than us, and about 50kg heavier with extra crew weight,” said Ashby. “They’ve got the legs on us upwind. And then the cunningham broke – again!”

Coincidentally one of Cammas’ crew is called Hervé Cunningham, and it was Cunningham who observed what a difference a lack of cunningham can make. “They were leading us in today’s last race,” said the tall crewman, “but when their cunningham broke you could see what an effect it had on their performance. We were probably a knot faster through the water after that.”

And so Norauto matched Team Tilt’s early afternoon performance by winning the final three races of the day. It couldn’t be closer between these two, with Cammas holding a single point advantage over Schneiter, and with both boats a long way ahead of the rest of the fleet. Gunvor’s retirement has allowed Armin Strom to move into 3rd overall, with the Swedes in 4th. A close battle is underway for 5th and 6th between the two French teams, Spindrift Racing leading Team Engie by a point. Behind them are the three Owner-Driver teams.

The war of attrition held up Argo’s and Malizia’s progress in the regatta today, although the USA team skippered by Jason Carroll holds a 9-point lead over the Monaco crew. The newest team on the block, Orange Racing, started to climb through the fleet towards the end of the day as skipper Laurent Lenne steered the Dutch boat to 8,7,6 finishes, only to fail to complete the final race of the day due to a Man Overboard incident. Still, the Dutch have the highest learning curve and sailed a pretty clean day to close the gap on the boats ahead.

A day of many dramas, and one capsize

The reaching starts on the GC32 Racing Tour are always moments to get the blood pumping, but today it was the leeward gate marks that proved to be the most challenging part of the course.

Malizia Yacht Club de Monaco was charging down the course on port gybe at high speed, with Armin Strom already having rounded and on her way up the next leg. Too late, the crew from Monaco responded to the collision course, helmsman Pierre Casiraghi forced to abandon a last-second gybe and steering the opposite way to minimise contact. The Malizia gennaker brushed over the top of Flavio Marazzi’s boat, but no real harm done.

However, while there was no injury to any of the crew, one of Malizia’s foils was damaged while being pulled upright by a chase boat and forced the team from Monaco to head for shore for the rest of the day. Even in adversity, though, Casiraghi manages to remain upbeat. “We might be up all night trying to fix the foil, but we will be positive,” he said. “It’s like a 1970s car rally where everyone is working on their cars to be race ready for the next day. It’s great!”

A protest was underway this evening at the Yacht Club Fraglia Riva to work out who was right and who was wrong at a couple of leeward mark incidents that caused minor damage to Team Engie, Argo and Gunvor Racing. Iain Percy already admitted responsibility for the Swedish error in turning too close behind Argo, causing a small chunk to be taken out of one of Jason Carroll’s rudders. “Sorry about that,” smiled Percy sheepishly as he handed over a few bottles of something alcoholic as some kind of peace offering, which was gratefully accepted by Carroll – even if they had a few more hours of sticky epoxy and carbon repair work ahead of them tonight. However it was bad news for Carroll in the protest room after Argo was disqualified for failing to keep clear of Team Engie.

Day 3 holds the prospect of more thrilling racing at the northern end of Lake Garda, which is proving to be every bit as good as the fleet had hoped for.