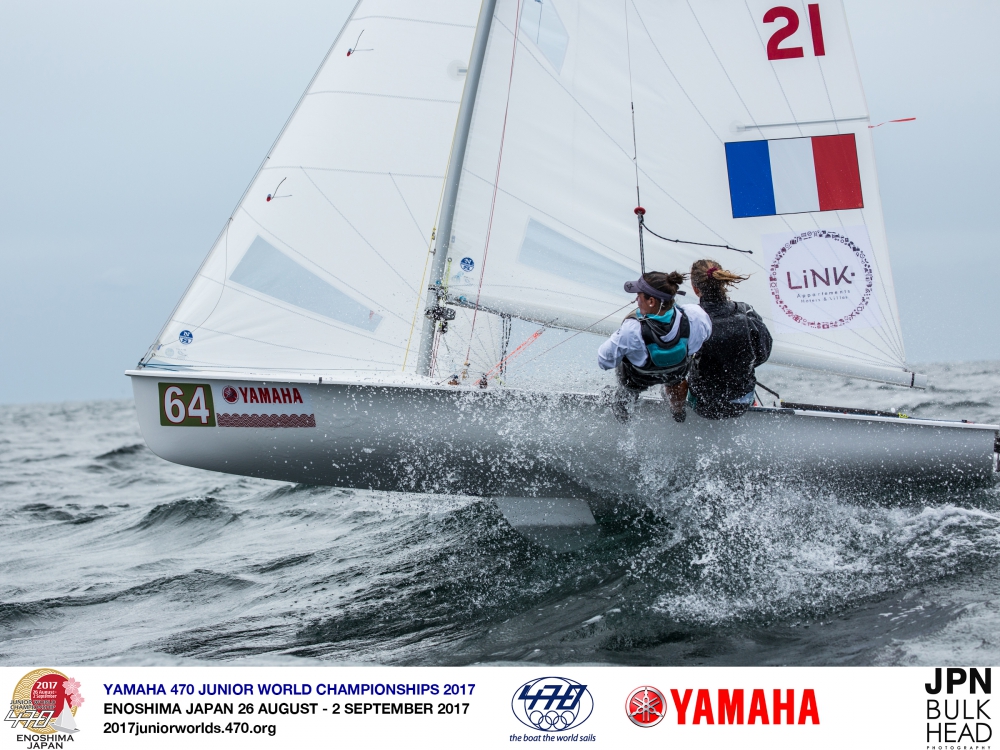 Cloud and a north-easterly 18-25 knot breeze, with choppy waves put teams through their paces as they faced off in the final two races to decide the top ten teams advancing to the 470 Men and 470 Women Medal Races tomorrow.

Both the series leaders going into the Medal Race have assured themselves of a podium finish, with women’s defending champions Silvia Mas Depares/Paula Barcelo Martin (ESP) and Hippolyte Machetti/Sidoine Dantès (FRA) now just needing to execute the perfect race strategy tomorrow to make sure they hold onto gold.

After yesterday’s experience, today’s second opportunity of racing with Typhoon #15 saw all teams better prepared to fight against the weather and each other. Whilst many teams struggled yesterday, today was different as they welcomed the challenge of wind and waves.

The northerly 18-25 knot breeze was stable with the 470 Men starting first at the scheduled start time of 1100 hours. In compliance with harbour rules, Japanese sailors often remain ashore in conditions above 20 knots, but as the World Championship can be sailed in stronger breeze it was an exciting opportunity and great experience for them to race in such strong conditions.

Saturday will feature a last race for the teams not in the Medal Race, starting at 1100 hours with the 470 Women, then 470 Men. The Medal Races get underway at 1230 hours for the Men and 1315 hours for the Women. Typhoon #15 is forecast to move away from the Japanese coast, and a northerly breeze of around 18 knots is expected.

470 MEN
A neck and neck battle between Hippolyte Machetti/Sidoine Dantès (FRA) and Daichi Takayama/Naoya Kimura (JPN) rewarded each team with a race win and a 2nd place. Takayama/Kimura led in race 9, but during the second rounding of the gate the French pair took the advantage and went onto win in a tight and exciting performance.

No such opportunity in race 10 though, as Takayama/Kimura sailed a 'hero' race, leading from start to finish, and with it opened the door wider to secure a medal tomorrow.

At the finish, the Japanese pair were so happy they screamed ‘yoku yatta’, meaning ‘great job’.

With Machetti/Dantès assured of a medal, and looking guaranteed to upgrade on their bronze medal from last year, the battle will unfold behind as any of the next three teams have the chance to step up to the podium. At the 470 Junior Europeans in August, Machetti/Dantes had to face off against their Italian rivals Giacomo Ferrari/Giulio Calabrò and lost out, having to settle for silver.

This time, the Italians will be more concerned about hunting down the Japanese and French pairing of Guillaume Pirouelle/Valentin Sipan who are their closest targets, as they are unable to unseat Machetti/Dantes.

The USA’s Wiley Rogers/Jack Parkin have laid down a strong performance at their first ever 470 Junior Championship, finishing 5th overall, although now out of contention for a medal finish.

470 WOMEN
By the time the women started racing, the breeze was averaging 25 knots, gusting towards 30 knots at the end. Stunning conditions to show off the performance of the 470 Class.

Standout racing of the day went to Australia’s Nia Jerwood/Monique de Vries who knocked out a spectacular performance to score 1,2 and shift up to 2nd overall, 11 points off the series leaders, Silvia Mas Depares/Paula Barcelo Martin (ESP).

Jerwood/de Vries are one of the many teams here with Tokyo 2020 firmly in their sights, and a podium finish three years out would boost their campaign. Benedetta Di Salle/Alessandra Dubbini took out the race 10 win.

Behind series leaders and defending Champions Mas Depares/Barcelo Martin, each of the next five teams have a chance to stake their claim on a medal.

Japan’s Mano Udagawa/Yurie Seki struggled in the conditions, scoring 13,9 and slipped out of medal race contention by a narrow 1 point deficit.

Tomorrow, they will contest the last race for the non-medal race teams, and holding a 22 point margin over the 12th placed team of Misaki Tanaka/Ayano Kudo, look likely to end the Championship as top Japanese pairing.

A great end to their first ever international 470 Championship for New Zealand’s Courtney Reynolds-Smith/Brianna Reynolds-Smith as they advance through to a debut medal race appearance. Place a front half of fleet finish tomorrow, and they have a chance to climb up the leaderboard.