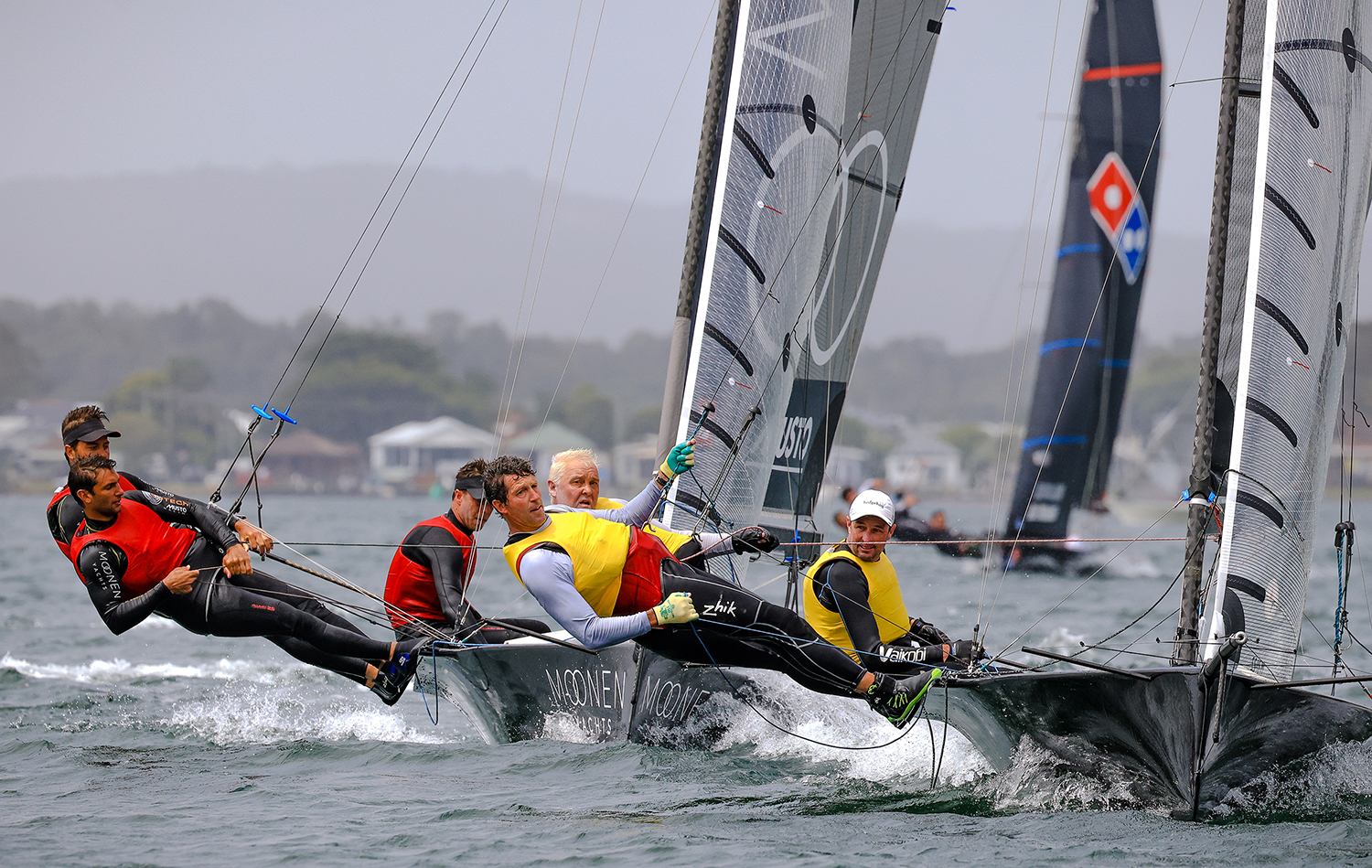 A long-awaited and much-wanted Red Pumps 16ft Skiff Australian Championship was in the spinnaker bag today for Nathan Wilmot, Brett Davis and Malcolm Page aboard Ronstan – right up until their spinnaker cruelly disintegrated 300 metres from the final downwind mark, taking their hopes of an early celebration with it.

The Manly 16s crew had gained the lead after seeing off their primary threat, Daniel Turner’s Moonen Yachts, and were engaged in a two-boat duel with clubmate IMEI. The gear failure opened a passing lane that IMEI quickly capitalised on.

With IMEI snatching the victory from Ronstan, displacing Moonen by a solitary point for second overall, it means the title is up for grabs tomorrow for any of the three boats. Mathematically there may be other possibilities but it’s unlikely, and in a sense, it’s fitting that such a high quality and hotly contested regatta should come down to the wire.

Ironically, Ronstan was poised for its first race win after eight attempts this series – they’ve reached the top through sheer, unwavering consistency, never falling outside the top five.

“We were having probably our best race of the regatta as we’ve finally learned how to sail with our smaller rig,” Wilmot said. “Then, all of a sudden, a little rip turned into a full blown-out spinnaker and we lost first place.

“We could’ve had an early shower and a few beers to celebrate but now we have to sail again tomorrow. We’ll go out and give it all we’ve got.

“I’ve done the past three nationals and sailed these boats for a long time. I haven’t won a national title yet, so I know how hard it is. Maybe tomorrow we’ll be celebrating.”

“We led early then were passed by several boats going downwind. We pushed away again on the second leg and it then became a two-boat race with us and Ronstan.

“They had the gear failure but we were close enough to take advantage of it. That’s part of sailing but I feel for those guys because they sailed a very good race.”

In IMEI and Moonen’s favour if a countback’s required is the fact they’ve both won prior races. Either way, Manly will likely score the trifecta after Belmont took the quinella in the last national title.

Best of the local skiffs, in sixth place overall, is Insight Building Services. It finished fourth today and is ruing missed opportunities

“We’ve been reflecting on the fact that we’re the leading Belmont boat,” crew man Andrew Stone said. “We’ve had an inconsistent regatta but looking back at the racing, we’re really happy with how things are going from a club perspective.

“We were buried back in 17th place early today but we pushed the boat through to fourth and we’ve learned a lot as a team.

“Our game plan for tomorrow is to go for it. We’re right on the heels of Fluid, with (Nathan) Outteridge and the boys, so it would be really sweet to beat them.”

Fluid’s all-star SailGP team showed their tactical strength today by finishing third, but they’re paying the penalty for earlier race scores of a 7 and 6. A top five overall was their pre-regatta ambition, which they can potentially achieve.

The crew of East Coast Marine were tipped as contenders but haven’t peaked at the right time. Today they pulled out the big rig, despite the marginal wind conditions of 15-18 knots, and came 10th.

“We just thought we’d sail free and easy and stick with what we know. We came back into the race as it wore on,” said sheethand Joel Castle, who is also the brother-in-law of Tom Slingsby.

On Slingsby: “He sets the benchmark fairly high but it has been great sailing with Tom. We’re close mates but we don’t get too many chances to be on the racecourse at the same time.”

In other results, young Manly sailors, Max Downey and Thomas Mountstephens aboard Cheeky, have taken an unassailable lead in the 13ft Skiff national championship with a perfect scorecard.

North-east winds are predicted to continue for the final day’s racing tomorrow, gusting to 20 knots.

Forty-six crews are taking part in the Australian Championship being held at Belmont, NSW.