Since 2010, the 49er class has been investigating, testing and exploring exciting ways to conclude regattas. The Theatre Style concept is now up for a final vote this week at the ISAF Annual Conference on inclusion at the 2016 Rio Olympic games. The concept will either be killed off (and we go back to one double point medal race) or it will be adopted. Last year the Events Committee rejected the Class’s submission. Council, after hearing the Class’s strong supporting argument, defered the decision wishing for further testing of the concept. This year, there is no time left to defer and a decision will be made.

Here are the top 10 reasons why ISAF should embrace the Theatre Style concept for the Olympics:

1) Having three short single point races is more fair than one double-points race.

Statistics and logic both point to this obvious fact that more races will average out the points, minimize the impact of any single event, and therefore be more rewarding of underlying skill.

2) Greater chance of the winner being decided on the final day.

3) Theatre Style is made for TV.

The races are shorter in both distance and time. This increases intensity and excitement. In addition a smaller field of play is easier to cover with cameras. Camera angles are better (deeper) and images are richer. The Olympics represents almost all of sailing revenue and is an event built around TV, if we can make sailing work better on TV that will help secure sailing within the Olympic family into the future. A shorter, smaller course dramatically reduces the complexity and challenges associated with filming a sailing race.  Even a single lens, race can be tolerable to watch, while on a reasonable budget a live sporting broadcast is possible.

4) Intensity, physicality that showcases the skills of the sailors.

Theatre Style pushes the sailors in terms of intensity while racing, putting them into challenging situations and highlighting their athletic and sailing skill. The comfort zone that exists with most top Olympic sailors having mastered their boats is pushed further than ever before, allowing racing skills to be tested and rewarded like never before.

ISAF’s own Olympic Commission Report suggests that we should differentiate our Olympic events in order to highlight the unique attributes each particular event brings to the Olympics. This was based on the IOC’s request that we try and increase the appeal of sailing at the Olympics for a TV audience.  In addition December 2014, the IOC will be meeting with three things on their agenda, two of which directly tie directly to Theatre Style namely:

The IOC currently dictates to each International Federation the total number of athletes and medals that it can have at the Olympics. Sailing has 10 medals and 380 athletes. ISAF determines that we have 10 events and it assigns how many boats race in each event. The IOC executive will be debating whether they will award the events themselves and then suggest to the International Federation to select what equipment (boats/classes) to make up each event. For example, they could suggest three events as follows: Slalom Racing, Theatre Style Racing and Distance Racing. They may want to highlight the different nature of the sport. To the outside world, the boat is just the equipment (just like the horse is in equestrian) but the competition /format is the real event (dressage, eventing and jumping using the Equestrian example). The IOC may want some more or this kind of variety. We should take the lead and show how our events are different!

This is a new side to the IOC’s agenda. They aim to have a permanent TV channel that consistently brings the Olympic sports to the TV/online world in between games. That is great news, as most Olympic teams suffer from a lack of attention other than the few months before each games. Olympic TV would be a practical route for sailors and sailing to be less dependent on the Olympic event itself and get into the public view in between games. We can only take advantage of this opportunity if we have a TV ready product. Theatre Style is a proven, efficient and economical TV product.

The Theatre Style concept has evolved and been refined where it has proven to be simple, workable and efficient in terms of race management and media coverage. Yes, there is more work to be done and improvements can be made but it requires the submission to be approved to get to that stage.

8) Sailor driven from the group up

Theatre Style is a ground floor innovation, conceived by frustrated 49er sailors in an effort to make 49er sailing more exciting and media friendly. These 49er sailors inherently understand what works for the 49er, and designed Theatre Style around that. Being a fast boat, it does not take long for separation between first and last place to occur, so shrinking the course and the fleet makes sense. Introducing boundaries also makes sense as it leads to increased crossing and boat on boat interaction, both of which highlight the skills of the sailors.

The Class has tested, trialed and refined the concept over two years. It has now been put forward for adoption to  ISAF. In a top-down world of IOC whipping ISAF and ISAF whipping the sailing community, this opposite approach, of sailors driving the agenda of what they want, in answer to the challenges being set by the IOC, should be strongly embraced and encouraged. For a change it is the sailors and not ISAF who have conceived a legitimate solution to the challenge set by the IOC.

The medal race course has the Flamingo beach running up one side. Why not move the final day racing close to the fans and give them a real treat? Live fans get a much better viewing experience with Theatre Style because of their proximity. The closer the fans can be to the action the better their experience will be. Theatre Style shrinks the course but increases the intensity and excitement.

It has been amazing what the Extreme Sailing Series has done with their product. By racing close to shore, they have proven that the public and sponsors can get excited by sailing. The downside of this concept is that it requires sailing to be done in otherwise terrible sailing locations, with fickle wind, no wind, or wind requiring odd race courses that don’t allow for passing. Theatre Style can bring the same intimate fan experience to great sailing locations! It is not hard to see how we could end up with stadium type seating on either side of the racecourse with all the usual hospitality type services. You could have the sailors raft up right in front of the sailors during races in a kind of “pit stop”. The cheering and shouting and support being given to the sailors would be sensational. Branding, VIP opportunities, sailor interaction are just some of the initial ideas around a commercial approach that Theatre Style supports better than the current format. 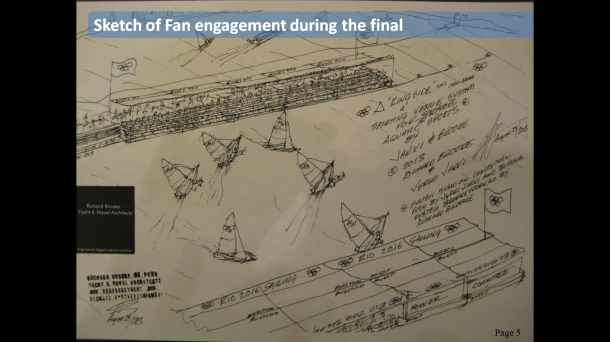 From November 2-9th in Palma de Majorca the ISAF conference will debate theatre style and other topics.  We urge you to express your support for theatre style,and we ask you to write to your member on the Events Committee or Council (see links) and let them know that sailing needs a shot of something good, and theatre style can be part of a great path for sailing!