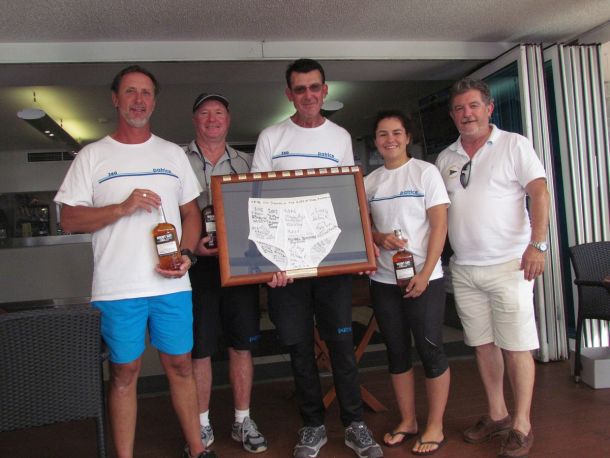 Tony Kirby (Patrice) and his crew of Peter Messenger, David Burt and Tara Blanc-Ramos have won the Mount Gay Top Jocks Regatta held on Sydney Harbour today, becoming the champions of champions for 2015.

Hosted by the Cruising Yacht Club of Australia, the annual event is an ‘invitation only’, regatta, based on major sailing results during the season and consisting of six fleet races sailed in the CYCA’s one-design Elliott 7 fleet.

Kirby has been on a roll of late, including winning six from six races at Airlie Beach in 2014 and at the beginning of March taking out the IRC Premier class Division 1 at the Sydney Harbour Regatta with his year-old Ker 46, Patrice, which has won and placed at numerous events since her November 2013 launch.

Kirby said he and the crew were happy to even be invited to take part. “You have to have won a CYCA event, so that’s pretty special in itself. Then to beat people like Julian, Sam and Hicko ….”

To come off champions, Kirby, a CYCA director, and his crew notched up three wins and a trio of second places on the two-lap windward/leeward course.

“Racing was very close. Half way through, we were only one point in front of Julian, so we had to pull one out of the bag,” he commented.

“It was light and shifty – it suited us older people,” Kirby said laughing. “Winds were 7-8 knots from the south/west early on, but shifted to nearly east by the end of the day, at about the same strength. Denis (Thompson, the Principal Race Officer) did a great job of getting the courses right.”

The yachtsman named Tara Blanc-Ramos (from the CYCA’s Youth Academy) as “our secret weapon”. She knows the boats well, last weekend finishing fourth overall in the Marinassess Women’s Match Racing Regatta conducted in the Elliott 7’s.