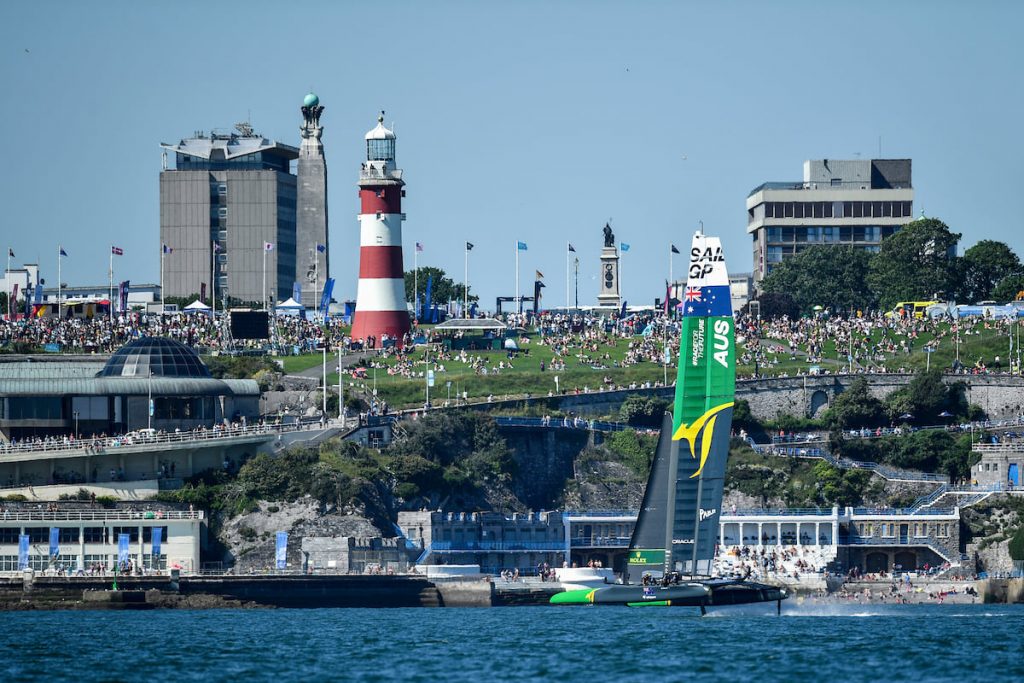 The Australian Team are now the overall leaders of SailGP Season 2, after they came away with the win at Plymouth on July 17 - 18. Pic - Bob Martin for SailGP 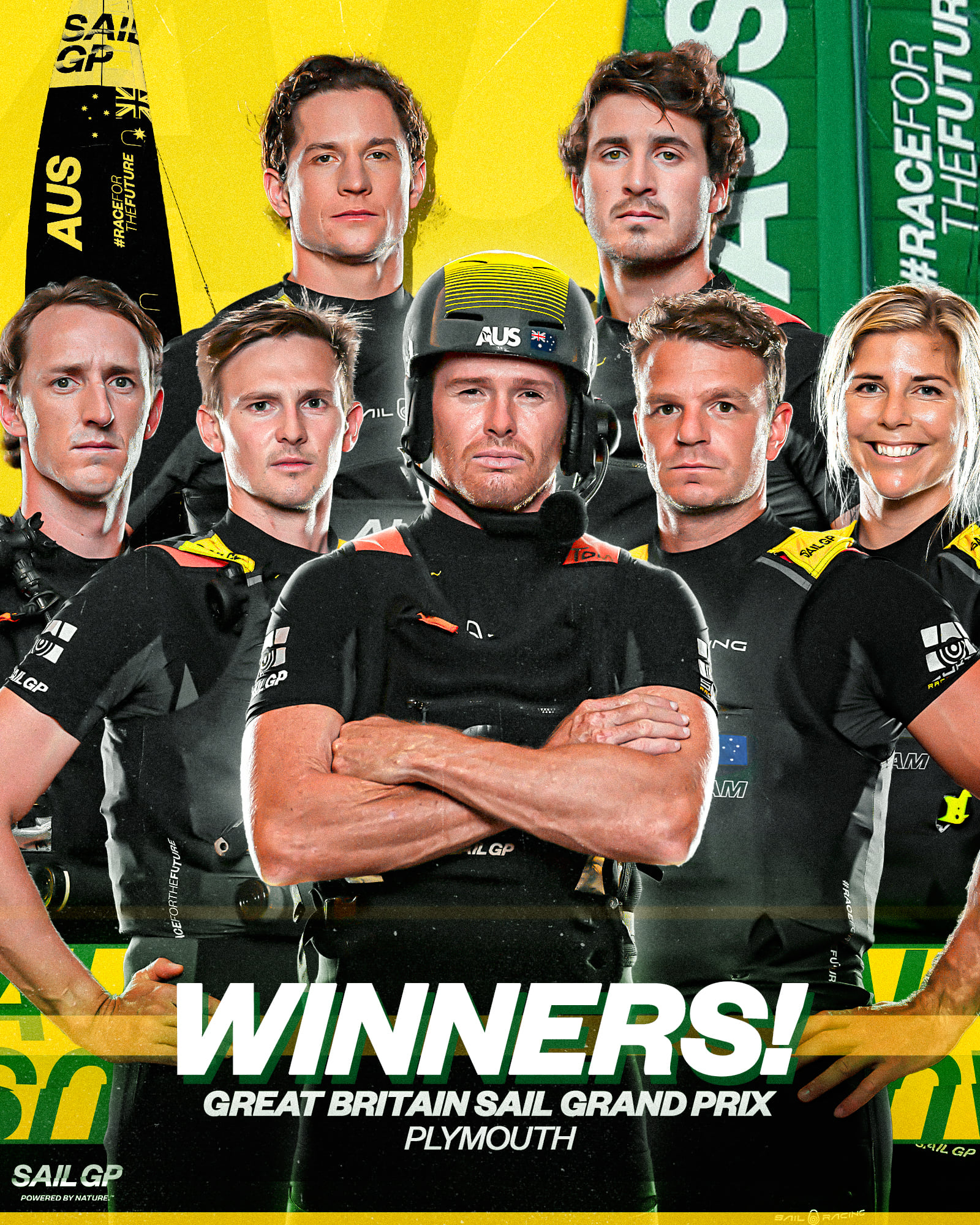 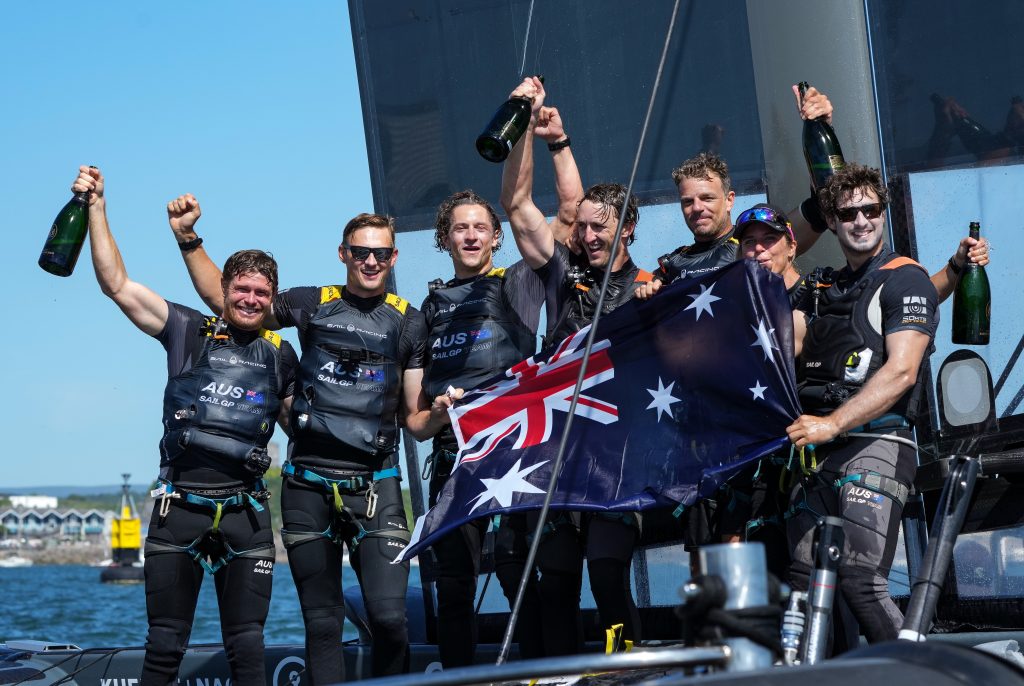 The Australian SailGP Team celebrate their win after beating Team USA and France in the final race at Plymouth. Pic - Bob Martin for SailGP 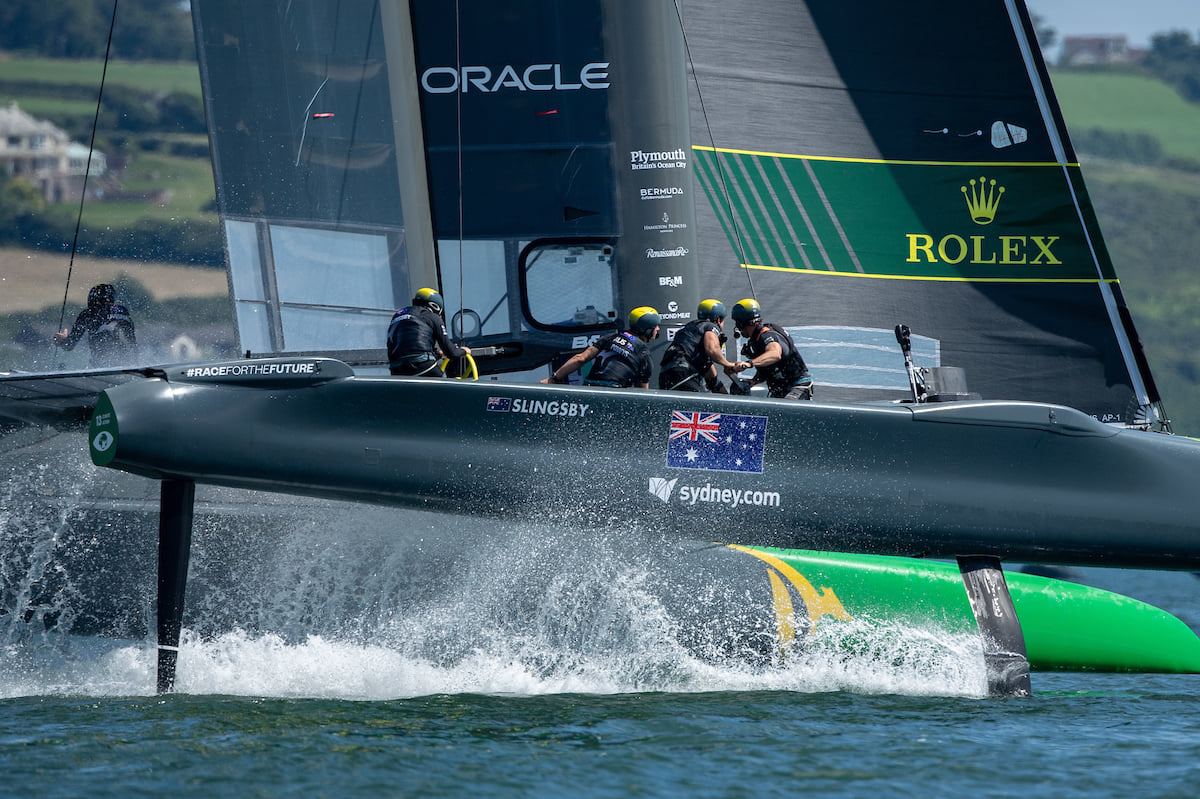 Last week, I caught up with sailing superstar Tom Slingsby in London after the Australian SailGP team’s ‘surprise’ victory in Plymouth.

The Australian Sail Grand Prix Team (SailGP) surprised everyone when they skyrocketed to the top of the leader board at SailGP Plymouth in July, but no one was more shocked than Australia’s driver, Tom Slingsby.

Coming into the event, Australia lagged at the bottom of the leader board following the team’s lacklustre results at SailGP Taranto (Italy) in June.

“If you had asked me before the event what we would have been happy with, I probably would have said a top five, because we had so many fill-ins and we had a bad results in the event before,” said Slingsby – London 2012 Laser gold medallist and America’s Cup winner.

“Our backs were up against the wall a bit and I just wanted to try and steady the ship. So it was quite a shock [for myself] to get the win. I knew we improved, but I didn’t think we were at the top of the fleet, but the team performed excellently and everyone in their roles did a great job,” Slingsby said, referring to Ed Powys who took over the role as flight controller in Plymouth.

The flight controller plays a crucial role in keeping the F50, a 50 foot one-design foiling catamaran, airborne and foiling throughout the race, and Powys didn’t disappoint. Australia’s regular flight controller, Jason Waterhouse, was unable to make the last two events, as he is competing in Nacra 17 multihull at the Tokyo Games, but will return to the role in Aarhus.

An Australian win seemed guaranteed after a stellar start in the final race against France and the USA, however, a dodgy gybe caused them to slip back into third place.

“If you give away the lead like that, you’re all of a sudden putting the ball in the other people’s hands and hoping that they make a mistake,” Slingsby said. “And if they don’t, you’ll never really catch them, so I was pretty frustrated.

“But I knew we still had a chance. And the US made a mistake. It was a really good race from then on, all the way to the finish, where we were able to just get the win.”

Australia is now leading the series going into the next SailGP event in Aarhus, Denmark on August 20–21.

Slingsby said he felt confident about the Team’s ability to perform in a range of conditions.

“It is going to be exciting moving forward, now that we know that we can perform in lighter winds and we have the skill set to do it. It’s a confidence booster.”

“If we get through the next few events in good shape, and we’re in the top bunch after the Spanish event, I’m confident for the last few events that we will come home strong and make that final three. The final event in San Francisco, it’ll be windy, and we’re very happy with that situation.”

But that’s not to say the Australians won’t have their work cut out for them, with international sailing alumni, Sir Ben Ainslie, set to return to his role as driver for the Great Britain crew in Aarhus. Great Britain is currently in second place overall on the SailGP leader board.

“If you lose any one of your team,” Slingsby said, referring to Waterhouse and Ainslie, “you’re sort of on the back foot. Ben’s returning, so they’ve got their full strength squad for Aarhus too. I expect them to be very strong.”

In conjunction with the easing of Covid-19 restrictions in England, the local crowds were out in full force for the SailGP Plymouth.

When asked about the potential for a new audience, Slingsby said, “I think we’re all building the brand of sailing. It’s relatively easy to get sailors to watch a sailing competition, but it’s hard to get non-sailors to tune in. We’re trying to take on that job. If you look at our viewership, overall impact and broadcast numbers for SailGP, they’re definitely going up.”

SailGP, a leader in sustainability and equality, has recently launched the ‘Impact League’. As part of the Impact League, each team will be judged accordingly on how well each can reduce their carbon footprint (e.g. using less fuel at an event). Teams will also be judged on their actions to help make sailing a more equal and accessible sport.

So far, New Zealand leads the event and Australia is ranked fifth. The latter has partnered with Parley for the Oceans, a sustainable organisation that will guide the Australians on making more sustainable choices during SailGP Season 2.

“The smartest thing SailGP did with this, was make it a competition,” Slingsby said. “Now we get a lot of competitive people in different teams working very hard to try and make their way up the leader board.”

During the COVID-19 pandemic, Slingsby has had to set up a base in Europe, rather than his usual fly-in fly-out method of commuting. He doesn’t expect to be back in Australia until late October.

Slingsby has stayed busy during his time in Europe, racing in a variety of classes. In early July he won the Moth division during Foiling Week in Lake Garda and in late June he finished second at the Italian Moth Nationals to fellow Australian and 49er Olympic gold medallist Iain Jensen.

The Laser has been dominated by Australia at the Olympics since Slingsby won in 2012, coached by Sydney 2000 bronze medallist, Michael Blackburn, who remains the Laser coach to this day.

“One hundred percent, I am watching and wishing Matt Wearn the best. I think he’s in great shape and has a really good shot at it. Hopefully we walk away from the Olympics with plenty of medals, and Australia at the top of the medal tally, which is where we like to be.”