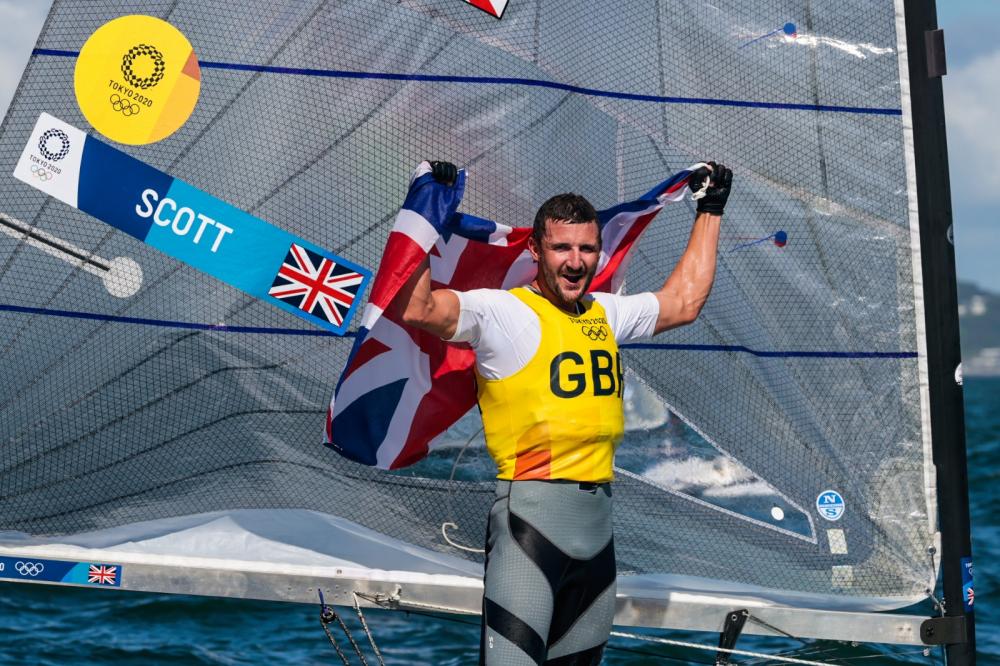 Despite being over at the start, Giles Scott (GBR) managed to climb his way back to fifth place and ultimately take home the gold medal in the Finn class. Pic - Sailing Energy / World Sailing

Giles Scott (GBR) had a poor first leg out of the start line, while Zsombor Berecz (HUN) and Joan Cardona moved into gold and silver medal positions. At this point the leaderboard was hanging in the balance by a point here and there.

Australia’s Jake Lilley rounded the first mark in the lead followed by Hungary. Sweden was round in third while Scott had worked his way up to fourth, back into gold medal position, still by the narrowest of points.

Towards the bottom of the downwind leg, Scott was overtaken by three boats and now back to seventh, 1 point out of gold as Berecz maintained second in the race behind Lilley.

Up the next leg the points were going back and forth between GBR and HUN. Then down the final leg Nicholas Heiner (NED) broke into the lead past Hungary. The pack was reshuffling by the second.

When Zsombor Berecz (HUN) pulled back into the lead for the final leg towards the finish, he crossed the line in first and was in gold medal position. Somehow Scott managed to haul himself in front of Turkey and Spain in the dying moments of the race to claim gold.

Berecz not only won the Medal Race, he won the last ever race to be contested by the Finn dinghy which has been in the Olympic Games since Helsinki 1952.

Scott has successfully defended his Olympic title from Rio 2016.