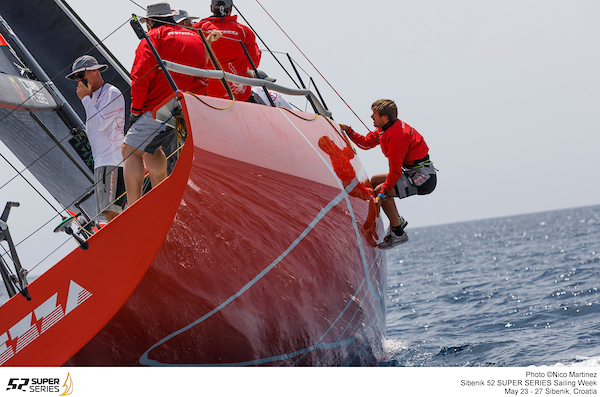 With nine shiny, brand new boats competing on a race arena that is completely new to the 52 Super Series it was the Quantum Racing crew, marshalled by afterguard Terry Hutchinson; tactician, Dean Barker; and helm and navigator Ian Moore, that finish the day ahead, but only on countback by virtue of their victory in the second race of the day.

It proved to be a dream start to the season for the Quantum-powered crews as Harm Müller-Spreer’s Platoon mirrored their counterparts’ score with a 1,4 to lie second – on the same points aggregate – and Brazilian Eduardo de Souza Ramos crew on Onda, the third team in the Quantum stable, lie third after a strong opening second and seventh places.

After the Race 1 start, World Champions Platoon took the lead on the first downwind, when early pacemakers Provezza appeared to suffer a technical problem with their kite halyard. Onda, with five-time Olympic medallist Robert Scheidt as tactician, stuck to their pre-start game plan and benefited from their early choice to go right, moving up to second on the downwind behind Platoon. That was the order through the finish line but the last run witnessed several exciting place changes in the 8-10 knot seabreeze, and the finishes behind the runaway top two were some of the closest yet.

Quantum Racing’s was the sharpest start of the day when they leapt off the line in the second race, that allowed them to take early control of the right side and by the top mark they were sixty metres, or more, clear of second-placed Gladiator. Once more the top two were able to hold their positions through the finish line – Takashi Okura’s Sled getting third with Platoon fourth.

It proved to be a fascinating opening to the season. The surprise package were Onda who have made significant gains since finishing tenth at PalmaVela, but tactician Scheidt pointed out they had stuck with their game plans, but the hugely experienced Brazilians positioned their boat shrewdly, keeping away from the traffic and any tussles with the top teams. On successive first beats, XIO Hurakan, the Italian team lead by Tomasso Chieffi, were top four, only fading on the second round. So too Gladiator – with Morgan Larson as tactician – proved a new boat is not a pre-requisite to win a podium place. And right now race wins are shared evenly between the Botin (Quantum Racing) and the Vrolijlk (Platoon) design studios.

Circuit champions Azzurra, reckoned to be the best prepared team and winners of PalmaVela training regatta in early May did not have the start they wanted. Their opening third was strong enough but they were on the wrong side of the first big shift during the second race and could not recover, resulting in a weighty tenth. So too it was something of a baptism of fire for the Luna Rossa crew, which lies just one place ahead of their training partners Azzurra after a 7,5 start to their campaign.