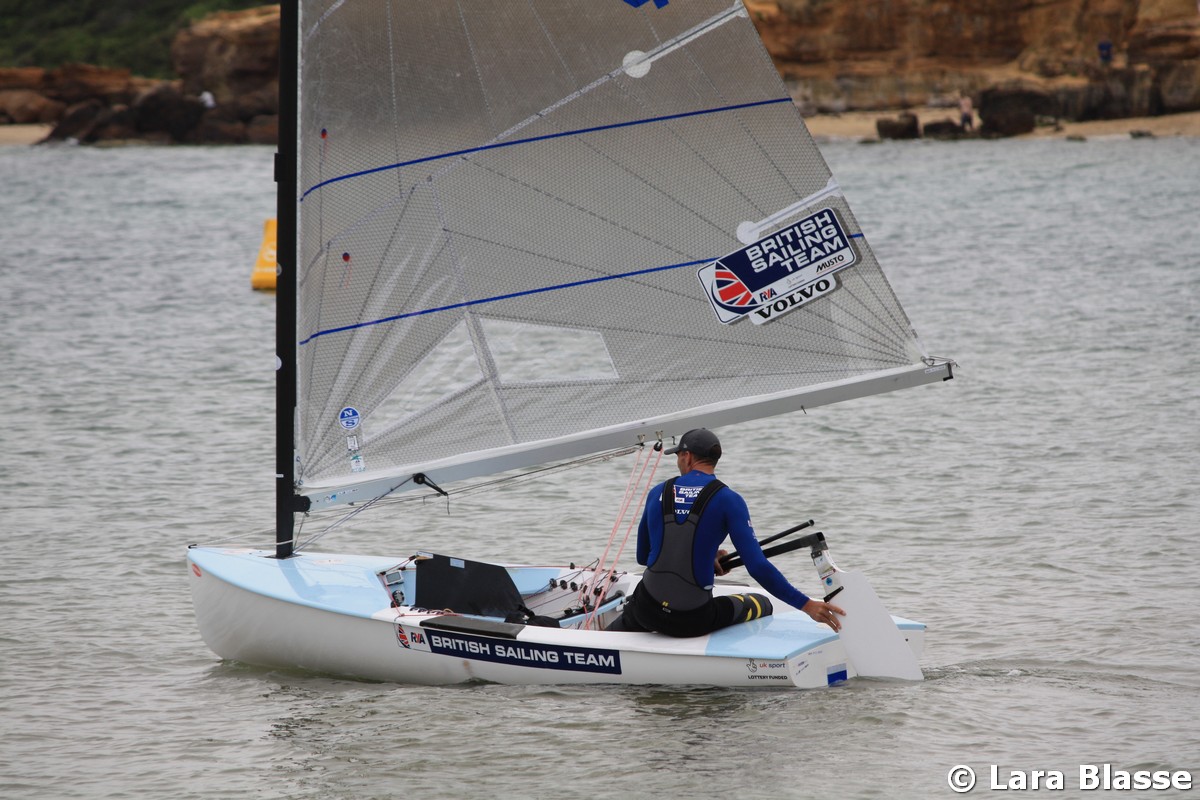 Giles Scott maintains a narrow lead at the front of the 40-boat fleet at the Ronstan Australian Finn Championship. Two points behind is Dutchman, Nicholas Heiner, while Kiwi Andy Maloney, is another four points back. These three seem to be separating from the fleet with just four races to sail.

The weather was not quite as expected with some cloud cover and lighter and quite shifty winds on Port Phillip. The sea breeze threatened and struggled all day until after the boats were safely ashore.

At 11am it was cloudy with an 8 to 10 knot southerly masquerading as a sea breeze. Race 5 was attempted under ‘U’ flag at 1300 in 10 knots at 185 degrees, however the race officer did not fly the Oscar flag due to the big holes in the breeze. After a general recall, it was then on to Black.

Scott started one down from the boat, close to Brit, Ed Wright, and Heiner. The right side paid very early and it was Maloney in the clear, shadowed by Wright and Heiner further to the right. There were big swings and big pressure dips on the first beat, but the wind stayed true at 185. Maloney led round in 6 to 8 knots from Wright and Heiner.

The sea breeze was still looking like building and the next leg was lengthened. At the next top mark Oscar was flying and it was a mad free pump to the finish in 12 knots. Scott was hanging in there in the top 10 at the first mark, but managed to work his way up to third by the finish, behind Maloney and Heiner, and ahead of Wright.

After a number of sail changes with the increase in wind strength to 15 knots, Race 6 started with Oscar flying. The race got away cleanly first time on ‘U’ with Scott clearly ahead at the first mark. He rounded the top mark in clear air and was never headed. Heiner picked up another second to equal Scott’s score for the day while Josh Junior, from New Zealand, had his best result of the week so far with a third.

Despite it being Pieter-Jan Postma’s birthday, luck deserted him for the second time this week after a problem with his halyard following a sail change and he started three minutes late, rounding the top mark around 15th.

There is a tight battle for the Australian title between defending champion Jake Lilley, and 2017 champion Oliver Tweddell

Tweddell said of the day, “Today’s racing was a bit lighter than the last two days. It was pretty difficult racing with some interesting shifts keeping everyone on their toes.”

“I was happy with a consistent performance throughout the day, and am looking forward to some more racing. Obviously the main focus for 2019 is to qualify Australia for the Olympics, and after that focus will be on individual performance.”

“But I’m really enjoying racing against the high calibre of sailors here, and looking forward to hosting the Finn class here later in the year for the Finn Gold Cup.”

Henry Wetherell is one of three British sailors taking part. Afer a consistent week so far he is lying eighth overall.

“Another day of 10-15 knots; tough on the body but great racing conditions yet again.”

“I’ve been getting myself in some good positions in a lot of races but failing to capitalise on them. But it’s such a strong group here so any mistakes are punished.”

“It’s all good learning ahead of the European season It will be interesting to see where everyone is after the winter’s training but I’m hoping to get myself into the medal races and challenge the top guys more than last year.”

The closest racing is for the U23 title with a neck and neck battle taking place between Lachy Gilham and Jock Calvert. Nineteen year old Gilham put together his best day of the week so far to sit in 13th overall, just two places and four points behind Calvert.

“Today was by far one of the best days racing I’ve had, mixing it with the all the top guys, and especially today, being only Day 3, Jock and I have been having great battles against each other, often coming down to the wire with a big pump off into the finish. Sometimes I can find an extra gear but Jock has better downwind technique and can just stay ahead.”

“I have been thoroughly enjoying racing against the top guys, learning from them and how they race. It’s even more promising that I can be in the mix with them coming into the top mark, but unfortunately cannot yet keep up on the downwinds. In the first race of the day I managed to beat Giles Scott to the top mark, which was a huge confidence boost that what I am doing is right. In the second race I managed to beat Jake Lilley to the top and he has amazing boat speed upwind too. All in all I think my boats speed around the course is good but still needs a few tweaks.”

Winner of Race 5, Maloney has edged closer to the top spot, following the race win with a fourth place and is now just four points behind Heiner.

“The race win was great today. I am pretty happy with how I was sailing the oscillations upwind and my technique downwind was as good as it’s been in the Finn.”

“It’s been a tough week of racing off Black Rock. We’ve had physical conditions for five out of the six races so far, and against the likes of Giles, Josh, the Dutch and Aussies there have been some great battles.”

“I’ve been surprised with the differences in pressure and shifts out there even once the breeze is fully established. It’s definitely been great to get some time here racing ahead of the Worlds on the same waters at the end of this year.”

“There’s plenty to get better at before that rolls around.”

The Grand Masters are also all lined up with Phil Chadwick extending his lead and currently 16th, but the real interest is in the Legends. Neville Wild has taken a 10-point lead on Dirk Seret, with a further 11 points to Bob Buchanan. It will be a big day tomorrow.

The forecast for Friday looks tricky, with the possibility of a sea breeze. Racing at Black Rock continues until Saturday with just four more races scheduled to complete the 10 race series.