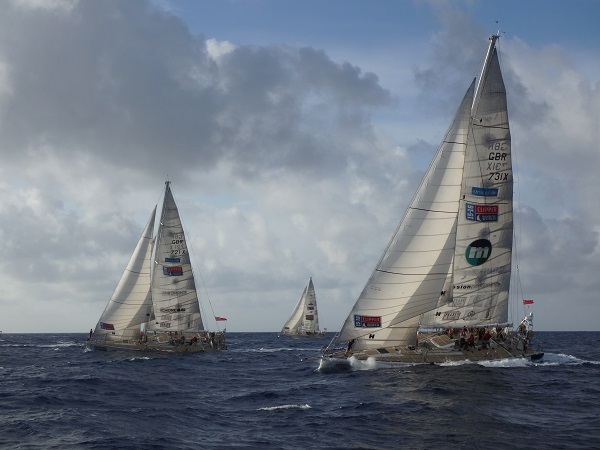 Just 0.6 nautical miles separate the top three teams as they navigate towards the Windward Passage which connects the Caribbean Sea with the Atlantic Ocean.

The seas have reduced, the wind has decreased since yesterday and is shifting and creating some squalls between the islands with boat speeds also reduced. A wind hole is expected close to the Windward Passage in the lee of Haiti which is causing concern amongst the Skippers as they ponder the best route.

Currently, Garmin is top of the leaderboard, 0.36 NMs ahead of Derry~Londonderry~Doire, and LMAX Exchange in third is 0.6 NMs behind the leader with approximately 1300 nautical miles to go until the finish line.

Former race leader ClipperTelemed+ is in fourth position 5.8NMs behind Garmin on day two of the LMAX Exchange – RACE of THE AMERICAS.

Ash Skett, Skipper of Garmin, described the last 24 hours and also looked ahead to forthcoming tactical decisions in his blog today.

“It's been a pretty good 24 hours for us on board Garmin as we have been able to maintain good boat speed, enabling us to punch our way through, between the leading boats,” he said.

“We are currently in close proximity to both LMAX Exchange and Derry~Londonderry~Doire, who we have been doing battle with all day. The last leg was a quiet one for us, all out on our own as we took the inshore route, so it's nice to have a close target to match our speeds against.

“So far, the winds have been very consistent but that is all about to change as we enter the Windward Passage. The weather files indicate a large wind hole in the lee of Haiti and the next few days could see a return to eking out the boat speeds in very light airs.

“Also a factor is the route between the islands. With a variety of options open to us, it will be interesting to see which way the others go,” Ash added.

Bob Beggs, Skipper of Qingdao, in ninth position, said the whole fleet had made good progress over the last 24 hours passing along the western end of Jamaica with the south west end of Haiti over on the port side.

“However, the wind has just died off as expected, so we have changed up to our Yankee 1 this is the first sail change of the race.

“The first sail change of many to come as we weave our way through the islands and off-lying reefs to the north to escape into the Atlantic.

“We are looking forward to the Trade Winds once we are clear to the north and hopefully a fast spinnaker run to New York,” Bob added.

In his daily forecast to the teams, Clipper Race Meteorologist Simon Rowell told the fleet:

“You’re just getting to the tricky bit through the islands now.  This is ‘Head Out Of Boat’ sailing, as the local effects of squall clouds and land will override the general synoptically-driven flow.

“There’s a lot of tropical activity around too, with the satellite image showing a tropical wave just south of you and more activity ahead and to the east.  There will be some quite spectacular thunderstorms embedded in this, and with them the associated gusts and shifts around the edges,” Simon added.

Which team will clear the Windward Passage first? Which yacht will best deal with the wind hole? Stay tuned to the Race Viewer to follow the latest updates.

Join us to celebrate 20 years of remarkable Clipper Race achievements at the Anniversary Ball on October 15 2016 at London's famous Grosvenor House Hotel, Park Lane. Click here to reserve your tickets.