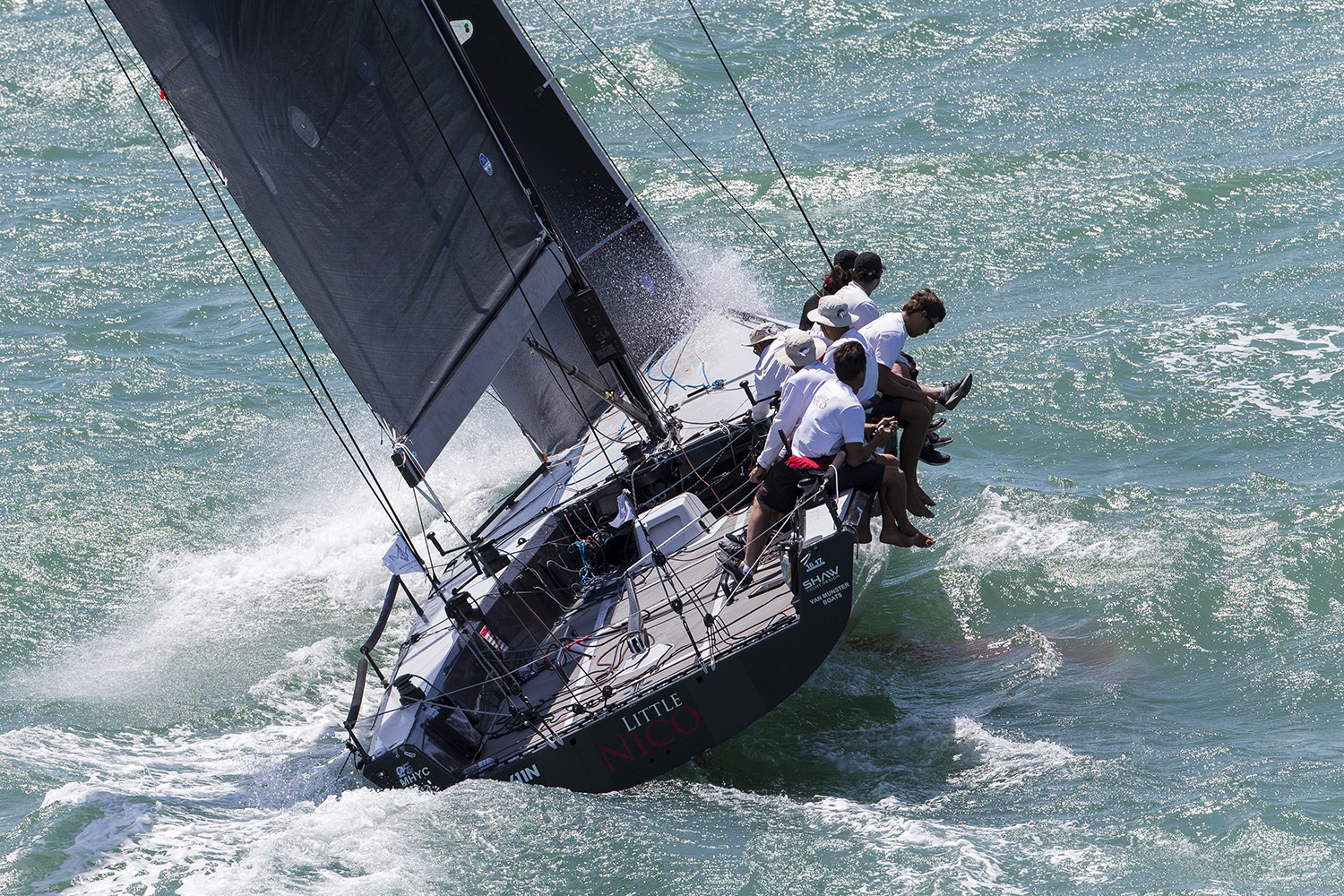 Competitors at Townsville Yacht Club’s SeaLink Magnetic Island Race Week contested the Around the Island Race today in winds up to 20 knots on a rather large swell, meaning a good time for some, damaged for others and one boat hit Middle Reef, despite warnings from the Race Committee.

Wayne McNee’s Celebrity was an early casualty when she scraped Middle Reef and had to be towed back to the Peppers Resort marina, one crew member quipping: “We’ll be wearing false beards at the prize giving tonight so nobody recognises us.”

McNee, from Queensland, said this afternoon, “We haven’t done any damage as far as we’ve seen so far, so we should be right to race on Monday (tomorrow is a lay day). We only scraped it, there wasn’t a ’bang’ as such.”

Graeme Etherton, owner of the Crowther Windspeed 32 Cat named ‘The Boat’ (Qld), said they could not have had a better day after literally match-racing the larger Scamper, Adrian Lawrie’s Schionning 15.2 (50ft) around the course until the South Australian Scamper set spinnaker for the home leg and could not be caught.

“We had a good tussle with Scamper. We led them almost to Horseshoe Bay when they overtook us, then we passed them again, doing 15 knots of boat speed. They put up a kite and said ‘goodbye’ and we weren’t able to catch them again. They got around 51 seconds in front of us and finished with that same margin, Etherton said, adding they had clocked up to 21.5 knots.

“A good day out – two good days of sailing, very enjoyable,” he said after winning the race from Scamper by nearly five minutes and lead the pointscore by one point from fellow Queenslander, Mistress (Dennis Coleman). Making up a Queensland trio, in third place is Salacia (Ian Johnson).

On Guilty Pleasures VI, a Farr 40, new Tasmanian owners Hughie Lewis and Gary Cripps said they benefitted from their sistership, Ponyo (owned by David Currie from Victoria), tearing their main during the race.

“It was fairly windy – up to 20 knots – and very lumpy,” Lewis said after finishing 11th in PHS 1. “We got a fairly good start and then ran a symmetric spinnaker – we should have set an asymmetrical. After that was a fairly big beat on the other side of the Island.

“Ponyo (which finished second in division last year) was ahead of us, but then she tore her main from top to bottom, so they had to drop it – and we overtook them – not how we wanted to do it, but there you have it,” said Lewis who was on his way to Ponyo to offer Currie the use of Guilty Pleasure VI’s spare main.

Lewis and Cripps, who sail for Bellerive Yacht Club in Tasmania, only took delivery of the Farr 40 two weeks before contesting Airlie Beach Race Week.

“It was light, so it suited us there – the boat goes well in the light,” Cripps said of winning Cruising Division 1 there.

It didn’t give much time to learn the boat which Lewis said they came by via a Farr 40 sailing friend Colin Thomas.

“I had been sailing an SB20 and Gary was sailing a Sydney 38 and we decided to go back to the dark side and buy a fast yacht. We told Colin we needed something that was already in Queensland, it had to be cheap and have new rod rigging. Colin said ‘I’ve got something that ticks all the boxes’, and here we are.”

Lewis says the average age on board is 63. “Except for my 30 year old son-in-law on the bow and we bought the boat to have fun with it. We don’t want to get too serious. We call ourselves ‘Gerry and the Atrics’,” he said laughing.

In PHS 1, the first division away at 11am, Adrian Walters’ Shaw 11 Metre, Little Nico, took off like a rocket not to be seen again. She took line honours and won the race from Magnetic Island Race Week’s event chairman, Mike Steel and his Boadicca. Peter Lowndes Wine Dark Sea was third,. With a second and a win, Little Nico leads the division from sisterships, Wine Dark Sea and Never a Dull Moment.

For all results and all information: www.magneticislandraceweek.com.au/