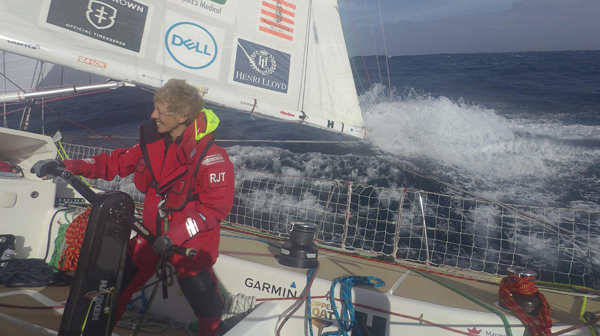 After 25 days and almost 4,800 nautical miles of racing across the Southern Ocean, the finish positions for Race 3, of the Clipper Round the World, The Dell Latitude Rugged Race from Cape Town, South Africa, to Fremantle, Australia, will come down to the final few nail-biting hours.

It is the second straight day that Unicef has been in the number one position and whilst his team’s first podium finish is in sight, skipper Bob Beggs’ thoughts are fixed on his closest and somewhat surprise competitor, GREAT Britain, which has made a highly impressive leap from sixth to second in the past 24 hours.

Currently in a drag race to the finish line in Fremantle Harbour, Unicef leads GREAT Britain by around 7 nautical miles, and as Bob says: “Well the race will come to an end for most of the fleet over the next 24 hours and its another frantic and exciting finish.

“Sadly, we leave one of our fellow journeymen, Simon Speirs, behind, but he won't be forgotten. His passing is etched in the memories of the whole Clipper Race family. The skipper and crew of GREAT Britain are sailing close by to us and will hopefully fulfil Simon's dream of a podium place today.”

There is no doubt that their beloved teammate Simon is the driving force behind GREAT Britain’s strong finish, with skipper Andy Burns saying: “Today is the grand finale for which we are all hoping for a bitter sweet ending to such a tragic crossing of the Southern Ocean.

“I just want to take my hat off to the crew on board GREAT Britain for their grit, determination and drive in the face of adversity.”

Visit Seattle is currently in third position on the leader board, but will be fighting PSP Logistics for the final spot on the podium. Both teams due to arrive between 2000 and 2200 local time Visit Seattle, whilst the fifth placed Qingdao (which has played its Joker Card which will see its race points doubled) is right behind, and is expected to cross the finish line between 2100 – 2300.

Visit Seattle skipper Nikki Henderson comments: “This is so close! I think it must be about 8 miles separating us, Qingdao and PSP Logistics.

PSP Logistics skipper Matt Mitchell agrees, adding: “It really could be anyone's race and we are working hard to keep the boat going as fast as possible. We tried a slightly different route to give us a higher wind angle on our way towards Rottnest Island and it's not working out too badly so far!”

Dare To Lead remains in sixth place, though Sanya Serenity Coast is just 8 nautical miles behind in seventh. After leading for the majority of the race before getting stuck in a wind hole just days ago, Sanya Serenity Coast skipper Wendy Tuck says: “The only way to describe this race is as a roller coaster ride of positions and emotions.

“We are still chasing hard on Dare to Lead and we will not give up trying.”

HotelPlanner.com is continuing to move up the rankings, and is now just 5 nautical miles off the eighth placed Liverpool 2018, with both teams expected to arrive Sunday morning, local time. The Clipper Race Committee has also announced that HotelPlanner.com will be awarded a redress of 1 hour and 30 minutes for taking on six crew members of Greenings in Port Elizabeth, South Africa.

Tenth placed Garmin is due to arrive on Sunday afternoon, and has come out of Stealth Mode early, due to the rule that teams are not permitted to use Stealth Mode within 250 nautical miles of the finish line. It will be a close finish with Nasdaq, who is less than 20 nautical miles behind in eleventh place.

To track the progress of the teams into Fremantle, keep an eye on the Clipper Race Viewer. The latest ETAs will also be updated on the website.