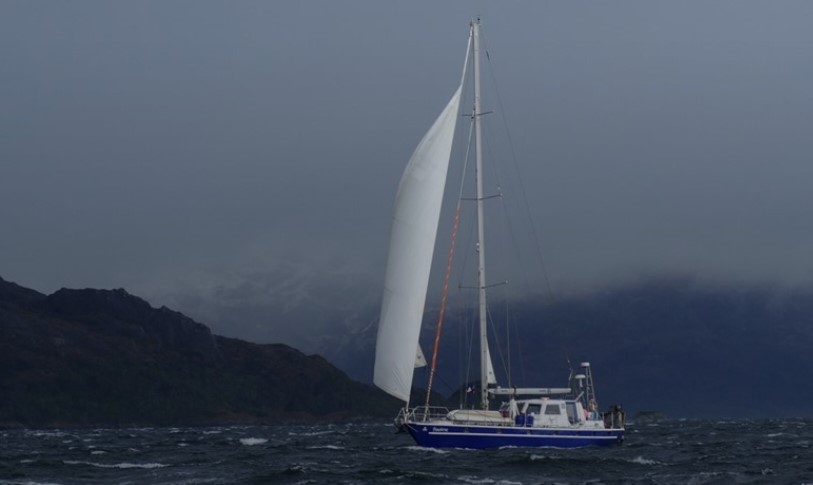 Greg Landreth and Keri Pashuk are researching whales in the Antarctic.

Devon, UK, 10 August 2020– In 2019, the Ocean Cruising Club began to support challenging ocean endeavours and is proud to stand behind the individuals and their projects which seek the betterment of the sailing community and maritime environment. The first recipients, Jon Sanders and Bert terHart, were both OCC members. In 2020, the OCC General Committee is pleased to announce extension of the grant programme to non-members who can satisfy the OCC requirements for membership.

Lauren Henry, who has assumed the role of the OCC Challenge Grant subcommittee Chair, remarked, “Despite the difficulties Covid has presented to the cruising community, the Grant programme was lucky to have recently received several very different proposals and, after much discussion, the subcommittee felt three were deserving of funding, only one of whom was already an OCC member. We are very excited to open the applications process to any bluewater sailor who can satisfy the 1000 nm passage requirement for OCC membership. The grant stipulates that all awards will include an OCC membership for qualified individuals.”

Philippe is planning a west-about solo non-stop circumnavigation in a Class40 sailboat, a feat which would be the first to be completed from the West Coast of the Americas. He won the 2018 Singlehanded Transpacific Yacht Race, and that experience spurred him to pursue this challenge. He is fully self-funded with very minimal in-kind sponsorship. His plan is well thought out and ambitious and merits our support. pjsails.com

The subcommittee recommended awarding Philippe a grant towards the cost of a trade wind workhorse spinnaker.

Many of you are familiar with Dustin, a double amputee preparing to complete his six-year solo circumnavigation. Dustin is an OCC member who has overcome incredible challenges to get where he is today. Although he does have visiting crew from time to time, he always backtracks to his starting point to make sure every mile sailed has been logged by himself alone. To date, he has visited over 30 countries and covered 25,000+ miles at sea. He has received minimal in-kind sponsorship. www.thesinglehandedsailor.com.

The subcommittee voted to recommend awarding Dustin a grant to cover the Panama Canal fees as well as the Galapagos clearance and agent fees.

Keri and Greg have 30 years of sailing experience, mostly undertaking “adventurous” sailing expeditions to the Antarctic Peninsula. They describe their voyages as having been “extreme adventure for its own sake,” but in the past decade they have pivoted to conservation science in an effort to contribute to the preservation of the extreme environments in which they have done most of their sailing.

They are currently undertaking research in the Golfo de Penas on baleen whales. They have requested a grant towards the purchase of a Torqeedo Cruise 10TS engine for a new dinghy currently under construction. They hope that by pioneering the use of this engine they can minimize their noise pollution as well as influence the next generation of sailors to make use of this electric technology by sharing their experiences. www.patagoniaprojects.org.

Commodore Simon Currin concluded, “It is an honour to recognise and support three projects by sailors renowned for their adventurous and/or environmentally sound endeavours. We look forward to following your endeavours over the coming year.”

To learn more about the OCC Conservation and Adventure Challenge Grants, visit the OCC website https://news.oceancruisingclub.org/Challenge-Grant.