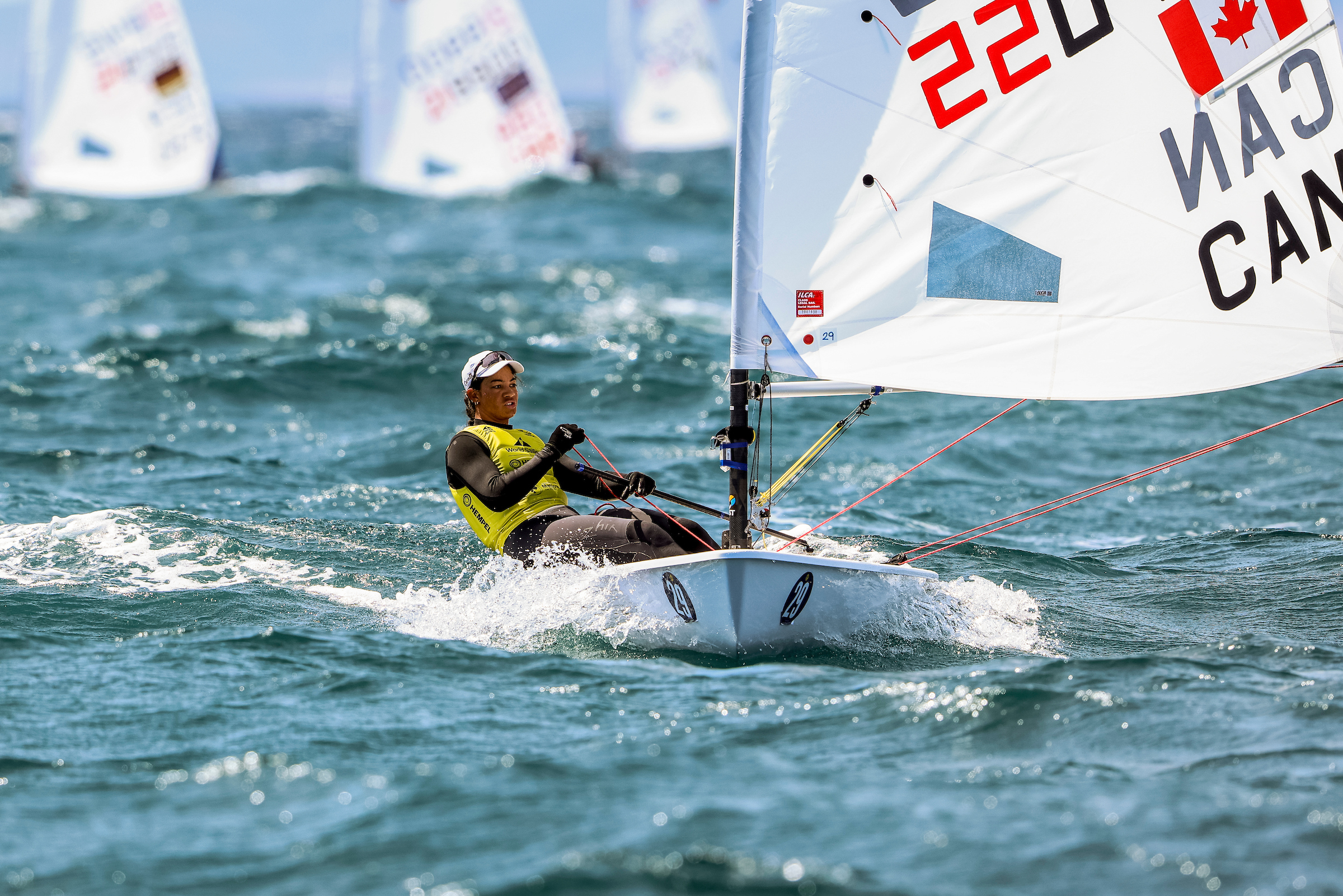 Three gold medals have been decided in favour of Italy, Netherlands and Canada ahead of time at the Trofeo Princesa Sofia Trophy, Mallorca, the opening regatta of the Hempel Sailing World Cup Circuit for 2022.

In this first major Olympic classes event since the Tokyo Games, and on the penultimate day of racing, the Tokyo Olympic gold medallists in the Nacra 17 carried on from where they left off. One Dutch female duo comprehensively overshadowed the Tokyo Olympic champions in the 49erFX and a Canadian made good her pledge in the ILCA 6 dinghy.

With a convincing overall class win in the ILCA6 single-hander, Sarah Douglas today delivered on a promise to herself to prove she was much more than ‘the queen of sixth places’ – the position she finished in Tokyo last year and one which has been too common on her final scoresheets.

Douglas has been the dominant force in the class this week in winds which have varied from nine to 25 knots. The Tokyo medallists have yet to return to the class, but Douglas is now doubly determined to become Canada’s first ever female sailing medallist.

“It’s so surreal at the moment,” said a delighted Douglas, who grew up in Barbados where she started sailing in Optimists,

”I am so excited. Last quad I realised I had become the queen of sixth place, I had a lot of them. So I started in Palma saying to myself, ‘This quad I want to step on the podium. And here I am. I have worked so hard this week. I was mentally fresh. I had stepped back from the ILCA 6 for a time and did some big boat sailing, so it was great to be connected to the sport again.

“I have been full force since January, training in Mexico and Florida. This is only the beginning.”

Reigning Nacra Olympic champions, Ruggero Tita and Caterina Banti (ITA) started their journey towards Paris 2024 in the best possible way. With a 24 point gap back to the Finnish crew in second place, they have wrapped up the Palma World Cup title with the Medal Race to spare.

As the whole foiling catamaran fleet gets to grips with the adjustable rudder elevators and experiments with the possibilities of upwind foiling, the Italians seem to be further along the learning curve than their rivals.

“Every upwind leg of this week has been a new learning opportunity,” helm Banti, said. “We were very focused on trying to make this work as it changes the way we sail so much.

Tita added: “We had no idea where the level was until this week. We did a good job in improving day by day and learned quickly how to sail with the new system. I don’t really know what we did differently, we didn’t really watch the others. We just focus on our sailing, just to get the best from the boat.”

Behind the unbeatable Italians, the Medal Race will still be a close battle for the silver and bronze. Sinem Kurtbay/Akseli Keskinen (FIN) have been improving throughout the week and are second overall, six points ahead of the Tokyo silver medallists John Gimson/Anna Burnet (GBR). Gianluigi Ugolini/Maria Giubilei (ITA) are 12 points behind, the only others with a shot at the Nacra podium.

Already assured of the overall win in the 49erFX, are Holland’s Odile van Aanholt and Annette Duetz who have left Brazil’s reigning Olympic champions Martine Grael/Kahena Kunze behind them. Solid scores of 1,6,4 were sufficient for the new pairing to secure the Palma title early.

“We are very happy and we sailed a great event,” said van Aanholt, the reigning world champion and rapidly rising stars of the women’s skiff.

“It was the first time Annette and I sailed together in a major regatta, so we have good reasons to celebrate, and also a lot of improvements to make. We work really well together but we are still finding our feet in some places too.”

Duetz, the 2020 Olympic bronze medallist, added: “Today was quite a hard day, but even if we didn’t get away well at the start we were still able to fight back, boat by boat. That’s a good sign.”

In Saturday’s Medal Race the Brazilians will have to sail at their best to defend the silver from a chasing pack who are close behind on points. Currently in bronze are Isaura Maenhaut/Anouk Geurts (BEL), with Italian, Swedish and Danish teams in close pursuit.

When a lead is not a lead
Going into the showdown Saturday with a lead of 24 points is French iQFOiL windsurfer Hélène Noesmoen. If she was in a dinghy class, or still sailing an RS:X, Noesmoen would have won her division with a day to spare.

However, the Finals format for foiling windsurfers – which are making their Olympic classes debut in Palma – means Noesmoen goes directly to the three-board Final tomorrow. She will face the two riders who will have advanced all the way through tomorrow’s quarter and semi-finals. But at least she, like Men’s iQFOiL leader, Andy Brown (GBR), is certain of a medal.

The Frenchwoman is well used to the winner-takes-all finale and, as world and double European champion, has both track record and experience in her corner. “I am happy with the week. We have all done a lot of racing and are tired, but this is not the first time I have been in this position and I like it,” she said.

“ We know in this kind of final anything can happen. I just try to have a good technique on the foil and I always manage to look around and adjust my tactics. For some girls that is a problem.”

Staying cool under pressure
Andy Brown is also certain of a medal and is keeping a positive, open mind, ready to take on whoever he comes up against whether they are strong or light winds specialists

Brown’s British counterpart in the ILCA 7, Michael Beckett, is also guaranteed a medal and equally chilled about carrying an 11 point lead into the Medal Race. He is ahead of Germany’s 2020 world champion Philipp Buhl and Australia’s Tokyo gold medallist Matt Wearn, whose two lots of broken gear found him in 122nd place on the first day. It is incredible he managed to climb the board to third on just one race drop.

Beckett said, “I love the Medal Races. It is good to have a points gap. Last time I did this regatta I was 21st. I’ve done a lot of work with the squad. This week I’ve been fast and it has felt as good as it has in training.”

Kites up in the air…or not
In the 470 Mixed class, Spain’s bronze medallist helm Jordi Xammar, now sailing with Nora Brugman, carries a lead 16 points into the Medal Race, so looks a good bet to go one better than his Silver here in 2019.

France also has a strong chance of securing medals in the 49er, where Erwan Fischer/Clément Pequin lead into the Medal Race by 11pts. France also looks strong in the Formula Kite classes with Lauriane Nolot and Theo de Ramecourt leading the Women and Men respectively.

The two carry two points into their four-rider final and need to win just one race in what amounts to a first to three points showdown.