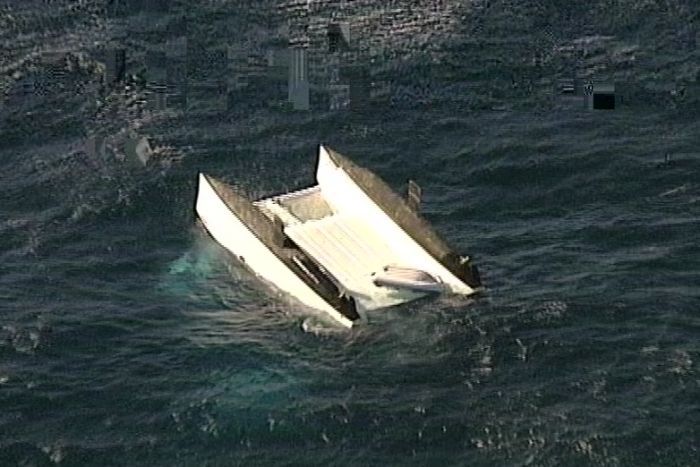 Three people have died and two have been rescued after a catamaran overturned off the coast of Newcastle this morning. AMSA reports that the boat was on a voyage from Port Stephens to the Central Coast when it capsized.

About 10.10am (Thursday 11 July 2019) an emergency beacon was activated from a 11.7m catamaran that had overturned approximately 7 nautical miles off the coast at Stockton Beach.

Officers from Marine Area Command responded, together with Marine Rescue NSW and the RAAF, and coordinated by the Joint Rescue Coordination Centre (JRCC).

Two people, a 14-year-old girl and a man aged 45, have been winched from the water and taken to John Hunter Hospital. Three bodies have been found in the water and have been retrieved by Marine Rescue. NSW Police have notified next of kin.

“What the Westpac crew members were confronted with was quite a high sea with strong winds at approximately 30 knots,” Mr Wiseman said. “Also what made the rescue quite difficult is being an overturned vessel, there was quite a lot of debris and ropes in the water at the time.”

Detective Acting Superintendent Grant Healey confirmed that conditions were difficult, with a 1-2 metre swell set against the strong westerly wind. He added that in the current conditions, no attempt could be made to salvage the vessel but that when the wind and seas dropped, rescue services would attempt to do so. Meanwhile, anyone boating in the area is warned to stay clear.