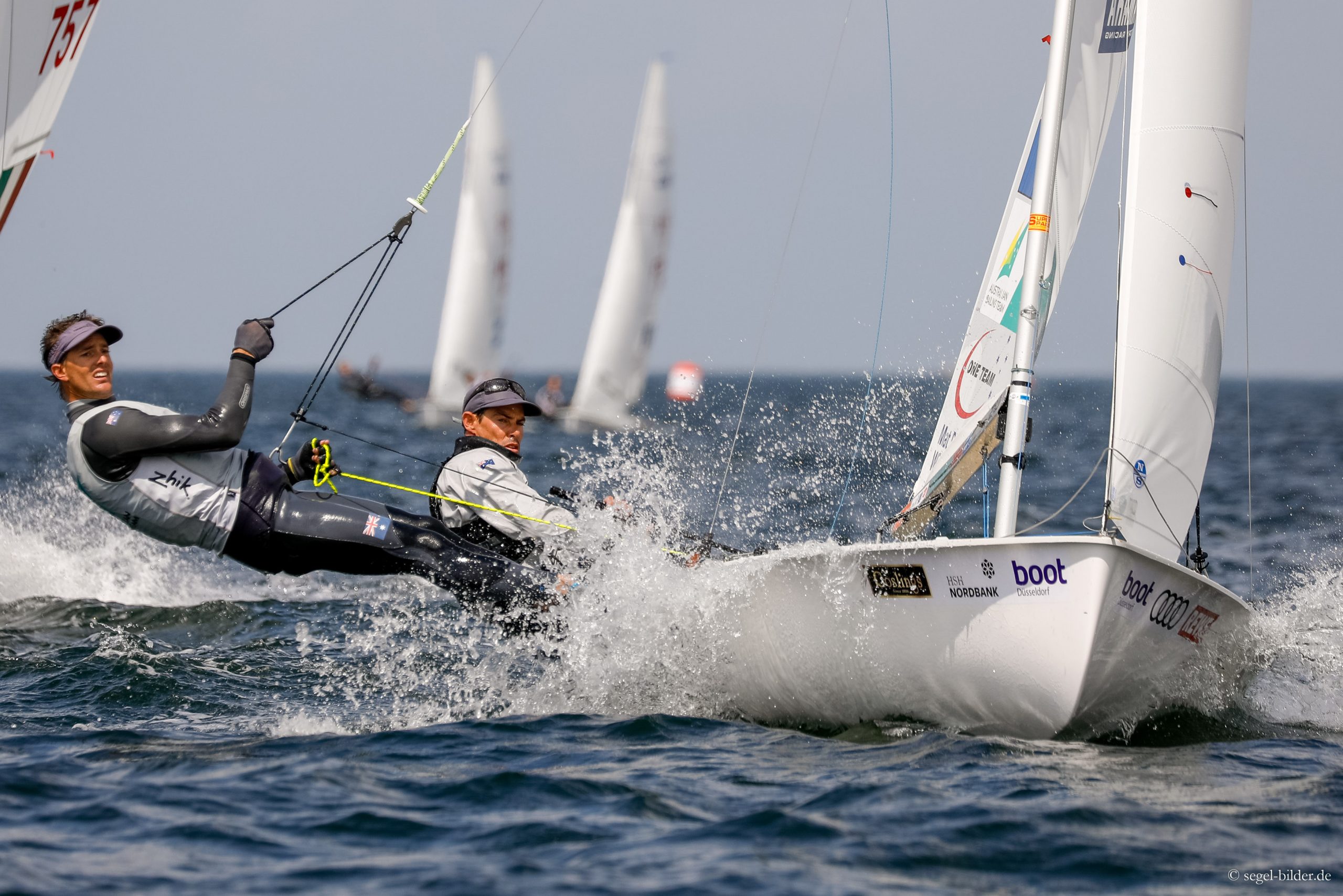 With Kieler Woche the last big event for the Olympic classes before the World Championships in Denmark six weeks from now, international stars are out in force to test themselves on Kiel Bay.

Day 5 of Kieler Woche was the start of competition for the Olympic classes and a number of other major events including the EUROSAF Parasailing European Championships.

Moderate to strong breezes made for a challenging but exhilarating opening day for the fleets ranged across multiple courses on Kiel Bay.

A year ago Piotr Cichocki became World Champion in the Hansa 303, with the event hosted by Kieler Woche. This year the world’s biggest sailing regatta is hosting the European Championships and the Polish sailor is once again setting the pace, winning both of today’s races. Behind him with two second places is Jens Kroker, Germany’s three-time Paralympic medallist now developing his skills in the Hansa 303. In third place is another Polish competitor, Waldemar Woźniak.

The Rio 2016 Olympic silver medallists in the Nacra 17 have powered to an early lead, with the Australians Jason Waterhouse and Lisa Darmanin firing three bullets in three races. Behind them are Gemma Jones and Jason Saunders from New Zealand and Riley Gibbs and Louisa Chafee from the USA. Further back is ‘new boy’ Nathan Outteridge making his international debut in the Olympic catamaran fleet. The America’s Cup skipper and multiple World and Olympic Champion in the 49er skiff is now racing the Nacra 17 with his sister Haylee and sits in 14th place.

A year ago Piotr Cichocki (POL 2904) became World Champion in the Hansa 303, with the event hosted by Kieler Woche. This year the world’s biggest sailing regatta is hosting the European Championships and the Polish sailor is once again setting the pace, winning both of today’s races. Photo: Sascha Klahn / Kiel Week

Nadine Böhm and Ann- Christin Goliaß have taken an early lead in the Women’s 470 fleet while some of the established stars like Poland’s Agnieszka Skrzypulec and Jolanta Ogar are struggling to be so consistent, currently lying in seventh overall. Spain’s Silvia Mas and Patricia Cantero, silver medallists a week ago at the Sailing World Cup Final in Marseille, are near the bottom of the leaderboard after a U-Flag penalty for starting too early in race two.

No surprise to find that in the Men’s 470 Mat Belcher and Will Ryan are setting the pace, with the Australians scoring a 1,2 from their opening heats. Behind the multiple World and Olympic medallists are the Japanese duo are Kazuto Doi and Naoya Kimura, two points in front of London 2012 Olympic silver medallist Luke Patience crewed by Chris Grube from Great Britain.

The Women’s 49erFX skiff has completed one race, with top Danish team Ida Marie Baad Nielsen and Marie Thusgaard Olsen winning their heat and British team of Charlotte Dobsoon and Saskia Tidey winning theirs. The Rio 2016 silver medallists from New Zealand, Alex Maloney and Molly Meech came third in the opening race and are also looking strong in the build-up to the World Championships six weeks from now in Denmark.

While New Zealand’s two most famous 49er sailors – Pete Burling and Blair Tuke – are about to fight it out on separate boats for overall victory in the final leg of the Volvo Ocean Race, some other Kiwis are flying the flag in the 49er class at Kiel Week. Logan Dunning Beck and Oscar Gunn faltered in race one with a 15th but followed with a 2,1 to take the early lead. However, sharing the lead and on equal points with the Kiwis are two French teams – Erwan Fischer/Clément Pequin and Mathieu Frei and Noe Delpech – and a Polish crew Dominik Buksak/ Syzmon Wierzbicki.

The Laser Men are just one race in, and the winners of their respective heats were Hungary’s Benjamin Vadnai and Great Britain’s Sam Whaley. In the Laser Radial Women’s fleet, Maxime Jonker of the Netherlands took race one ahead of Maud Jayet from Switzerland. The other side of the draw were yet to race.