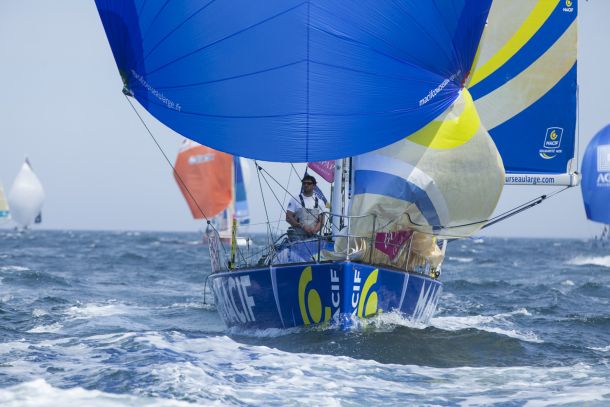 The leading trio in the north, Corentin Douguet, Vincent Biarnes and Yoann Richomme hold a steady margin on Leg 4 of La Solitaire du Figaro-Eric Bompard cachemire when they were about six miles off Penmarc'h SW Brittany around 1600hrs this afternoon, expecting to reach the western Sein as dusk falls this evening. Since spinnakers were set from this morning the initial lateral spread, west to east, has been reduced. But the delta between the leaders and the tail enders is already 20 miles, Alan Roberts dropped off the back of the group and he was 10 miles behind the second to last boat this afternoon.

Already the first of the twists and turns that were predicted for this leg have played out. The passage of the ridge last night has initially favoured those in the north with a steadier, more consistent breeze for longer but those who committed to the hard west early have been coming back with good speeds this afternoon, hence Yann Eliès had risen to ninth this afternoon just half a mile behind eighth placed overall race leader Jérémie Beyou. Alain Gautier had returned on Generali from 33rd last night to 13th this afternoon.

The first night of Leg 4 from Les Sables d'Olonne to Cherbourg-Octeville was dark with a few stars and a dying breeze. The offshore group appear to have struggled to get clear of a cloud bank and lost out initially. Meantime the group to the north, inshore were able to get to the new SW wind faster, led by Corentin Douguet (Un Maillot pour La Vie), Vincent Biarnes (Guyot Environement) and Yoann Richomme (Skipper Macif 2014).

Eliès lost initially due to his early tactical choice but has caught some this afternoon, converging with the rhumb line pack which is lead by Corentin Horeau (Bretagne Credit Mutuel Performance) who is in second place on the overall standings. He had a lead of 1.5 miles on race leader Beyou during this afternoon. The lateral separation of the fleet has reduced from 15 to five miles and right turn in 35 miles passage down to the Sein mark and Ushant ahead will very much set the hierarchy of the leg, at least for the 75 miles passage across the Channel to the Manacles.

Ireland's David Kenefick (Full Irish-Le Comptoir Irelandais) has profited with his course closer to the easterly leaders and was making solid progress this afternoon in 12th place, one of the fastest in the fleet in the middle of the afternoon.

Top rookie contender Sam Matson (Artemis 21) seems to have come off worse from the westerly option and was down in 34th place at 12.5 miles behind the leader and 2.9 miles behind the top rookie, his French rival Gwenolet Gahinet (Safran-Guy Cotton). Gains have been good during the afternoon for Sam Goodchild (Team Plymouth) who has been on the same track as Eliès and Gautier up to 15th this afternoon in the 36 boat fleet.

3rd Yoann Richomme (Skipper Macif 2014): “I chose to do the direct route. They all spread last night, I did not understand why. I chose to stay with the making tack. I did not watch the AIS really. The wind will build and we will be able to kite at a good pace to the Sein. We left the front late at night, it was light for a bit. Then this morning we had some SW'ly which was not really forecast. I'm on a direct course, we should be at the Sein at 640pm this evening and Ushant tomorrow. There were some quite big squally showers through.”

16th Gildas Morvan (Cercle Vert): “It was a soft night. Ive just dropped the spinnaker as the breeze was heading too much. There was a split, 12 miles from west to east, but now I think everyone has much the same conditions. It is a bit better now after light winds through the night, now seeing between 10 and 12kts. I did not get much sleep as the wind was very changeable.”

27th Adrien Hardy (Agir Recouvrement): “It was not an easy night, I had a good start to windward and was up the front with Charlie Dalin until 3 in the morning and then a big cloud with rain passed over and the wind dropped away and it has not gone so well since then. I got the spinnaker up but its not easy as the wind goes from 10 to 20kts and so Im under genoa now. All the way to England there is no big shift.”