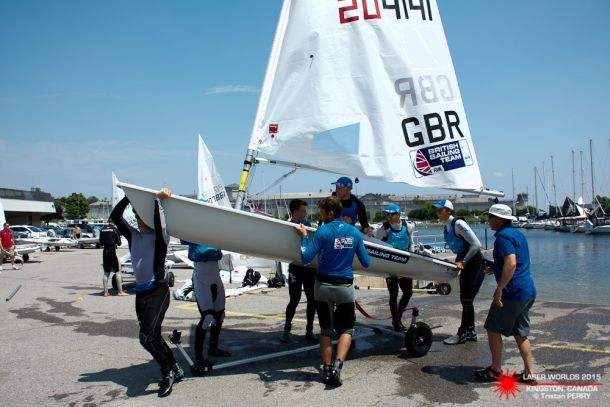 Nick Thompson is carried up the ramp by teammates after winning the Laser Worlds. Photo Sailingshot.

Final Day of the 2015 Kingston Laser Standard World Championship. Three races were completed today in winds of 6-10 knots from the North East, for a total of six races in the final series.

Nick Thompson representing Great Britain, went into the day with a 20 point lead, and was able to stay on top, winning the 2015 Laser Standard World Championship. Nick Thompson had a strong regatta, as he remained one of the top five competitors for the entire event. It was just reward for effort for the popular Briish sailor who had twice finshed runner-up at the Worlds to Olympic champion Tom Singsby in 2010 and 2011. He also won the bronze medal in 2009 and 2014.

Philipp Buhl, Germany was in 5th after the second race of the day. He finished 1st in the last race of the regatta to move up to 2nd! Australia’s Tom Burton placed 2,16,11 today to finish in 3rd overall. Juan Ignacio Maegli, Guatemala, began the day in 16th. He consistently placed in the top of the fleet, with a 7,9,2, moving him up the scoreboard to finish 4th.

“It’s been a tough week. I ended on a bit of a sour note with some mistakes on the final day, which cost me the silver medal. I made a few less mistakes than others, but a few too many to be in there with a chance of winning at the end of the day. I’m happy to come away with another podium finish at the worlds though,” Burton said at the conclusion of the regatta. “Overall I sailed consistently all week with some ups and downs. At times, I was quite happy with the way I sailed, but I didn't make the most of the good luck that came my way. Plus I had some tough times out there with me at the back of the fleet.”

Kacper Zieminski representing Poland moved up from 11th to 8th place today, by finishing 4 and 7 in the last two races of the regatta. Pavlos Kontides, Cyprus, had a hard day, starting off in 5th, and finishing in 9th overall. Lorenzo Brando Chiavarini, Great Britain, placed 10th overall.

Of the other Australians, Ryan Palk had a strong last day (17,2, 5) and finished the regatta in overall 11th. Mitch Kennedy finishes the Worlds in 25th, Luke Elliott in 41st and Jeremy O'Connell in 51st.

Prize giving ceremonies will be held Tonight, July 8, at 1900 at Portsmouth Olympic Harbour.

For a full set of results: http://www.cork.org/past-results/results2015/STD/RESULTS.html