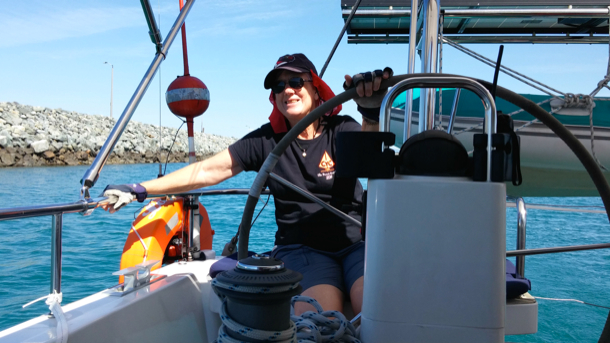 Cruising skipper, racer, mentor, sailing instructor and instigator of a huge relief effort for the victims of Tropical Cyclone Pam in Vanuatu, Heather Sutton is one of the nominations for the inaugural Cruiser of the year award.

The first time I sailed with Heather, in an afternoon race, I was struck by how well her boat was set up for easy handling.

Two ladies I had not met before were each stationed at a sheet winch: one for the main and one handling the self-tacking headsail. As the race progressed I was impressed with their competence and the quiet manner Heather instructed us all. When the champers and biccies were broken out on the run, I was stunned to learn these key crew members were not long time sailors but work friends Heather had trained to handle the gear on her Moody 45DS La Quilta. A nurse and a midwife were calmly trimming the sails as if it was the most normal way to sail, which for them it was as they had no other sailing experience.

But the deadly competitive nature of WAGS racing was not enough to prevent the non-stop banter and jokes flowing. Heather is a serious sailor who does not take herself too seriously. The RYA Senior Sailing Instructor plays down the sail training she did while unable to sail during the years she cared for her parents; despite being one of the instigators of importing the RS Feva, a new generation of sailing dinghy now used for school team racing in several states.

Heather’s lifetime of sailing experience began as a child on Lake Tinaroo on the Atherton Tablelands. It encompasses racing Lightweight Sharpies at university, racing yachts and dinghies in the United Kingdom and crewing in the Transatlantic ARC and world rally for cruisers.

When Heather heard of the devastation in Vanuatu, she did not hesitate to put her plans for the Kimberley on hold and volunteer her beloved La Quilta to carry relief supplies to the victims of Cyclone Pam. After a massive effort, collecting donated materials and fast-tracking La Quilta’s readiness for international cruising, Heather and her all female crew departed Mackay bound towards Vanuatu. Several setbacks later, including appalling weather, a damaged headsail and furler and problems with fuel and water leaks, La Quilta made it to Vanuatu.

According to voyage crew Trudy Erdmann, Heather showed great leadership to everyone involved considering the enormous challenges she endured; including the frustrations of legal paperwork, organising the ocean cruising fit-out for La Quilta and the donated aid. Plus retaining crew and keeping to deadlines.

Trudy was so impressed with Heather’s qualities as a skipper, she extended her stay aboard. What was to be six weeks away rounded up to five months and an experience of a lifetime.

The desalinator fitted just before the voyage was especially handy in the southern islands, where La Quilta was able to fill the twenty litre containers of all who appeared alongside in their outrigger canoes.

Trudy says it was a win-win situation. While the Ni Vanuatu were grateful for their distribution of aid over the two months, the La Quilta crew were humbled by the villagers durability in coping with getting their way of life restored after such loss.

On her return to Australia at the end of 2015, Heather resumed racing and helping others at Whitsunday Sailing Club. The racing success of La Quilta is obviously frustrating some of the more macho types, who have nicknamed the La Quilta crew the Stitchin’ Bitches. The origin of that name? Heather is a keen quilter, a hobby she took up while caring for her elderly parents. Her self constructed colourful wheel, winch and fender covers, complimented by industry mainsail cover and UV strips on the headsail are all based on patchwork, as is the logo on the hull.

My thanks to Trudy Erdmann for her help in compiling this nomination.

If you know of someone just as deserving of recognition then collate and send all information to Phillip Ross at Cruising Helmsman: philross@yaffa.com.au.