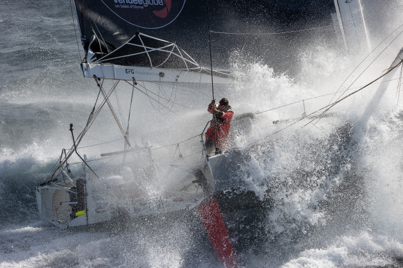 In just 30 days, the 33 skippers of the IMOCA fleet will be on the start line for the 9th edition of the Vendée Globe. Among them will be Boris Herrmann, the first German sailor to compete in this incredible race.

Boris will be competing with his 60ft foiling race machine, Seaexplorer – Yacht Club de Monaco (previously Malizia). Since the race’s inception in 1989, the Vendée Globe has seen some of the greatest sailors in the world battle it out, against the elements and each other, to be the fastest person to sail non-stop alone around the world. Such is the challenge, that less than 100 people have ever completed this brave feat.

The race happens every four years, with a current record of just over 74 days. This year the sailors are hoping to beat this with new foils and hull designs, resulting in some boat speeds rising to highs of 70 kph. These incredible speeds cannot be maintained throughout the treacherous course which sees competitors race through the tempestuous Southern Ocean. In this region, extremes of wind and waves will force the sailors to reduce boat speeds to limit the chances of serious damage or capsize.

However, the ambition and dream does not stop there. Boris hopes to finish in the top five of the fleet – a big ambition for a first timer against some seasoned veterans; the likes of Alex Thomson have sailed this race four times already. However, with the most miles sailed on his boat and years of preparation, Boris Herrmann is ready to take on this challenge.

Boris says: “After years of working towards this dream, I can hardly believe that I am about to embark on this iconic race. I have to thank our sponsors for making this possible and in particular Pierre Casiraghi for founding this team. Now is the time to show him and our supporters what we can achieve. I am confident in the boat and in our upgrades, I have sailed thousands of miles on this boat. I feel ready.”

For Boris, his partners and the team, this race is about more than just sailing. It is also about climate protection and education. Whilst Boris is competing in the Vendée Globe, he will also be measuring important ocean CO2 data to aid scientists with evidence to further understand and mitigate climate change. Via an onboard laboratory, Seaexplorer will take water sample readings automatically from the most remote ocean areas and send this rare and valuable data back to our scientific partners at Max Planck, Geomar and Ifremer. Here it will be analysed and made available via SOCAT to be used by scientists around the world.

The team have also just relaunched their kids’ education programme to engage children around the world on climate change and the ocean. Thanks to the support of The Foundation Prince Albert II and Kuehne + Nagel, it is now available in 7 languages (French, German, English, Spanish, Portuguese, Italian and Mandarin). School children will be following the race from start to finish and take part in live calls directly with Boris on the boat during his 75+ day race.

Boris sets sail on 8th November 2020 at 13:02 CET on his Monaco flagged vessel, but his excitement will no doubt be bittersweet, as he will be leaving behind his new baby daughter and wife. At least, advancements in technology will enable him to use video calling while at sea to see his young family.