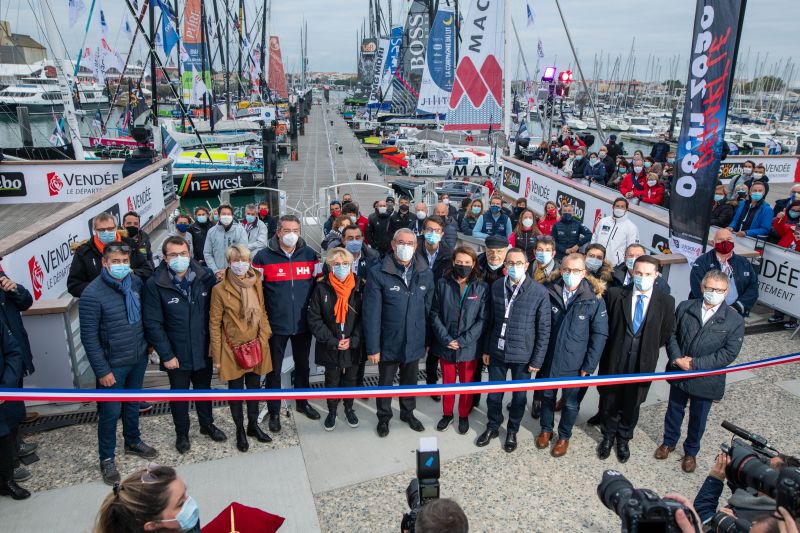 The impressive size and scale of the record sized fleet of IMOCA 60 yachts which will take the start line of the ninth edition of the Vendée Globe solo race round the world on Sunday November 8th, was immediately apparent today in Les Sables d’Olonne, France when Yves Auvinet, President de la SAEM Vendée and the Département de la Vendée officially inaugurated the expansive Start Village.

Today’s opening assembly for the skippers, the many guests and VIPs representing race organisers and owners, the SAEM Vendée, the local regional institutions, partners and sponsors who enjoyed their first to review the fleet and meet the skippers represented a significant milestone, a tribute to the hard work and dedication that has ensured this historic edition of the race will happen.

Auvinet, President de la SAEM Vendée and the Département de la Vendée emphasized, “There is real joy for us all today in seeing our 33 skippers, their boats and their teams present here along the Vendée Globe pontoon. Seeing them here in the Vendée, these wonderful machines and their skippers, be they experienced or rookies, fierce competitors or adventurers alike is a source of pride for the Department of the Pays de la Loire region and the city of Sables d'Olonne.”

He added, “Given the health context. It is also a relief the Vendée Globe teams, and the state and health authorities, partners and all the sports projects have worked so hard to make sure the Everest of the Seas runs this year, and for the Vendée Globe to preserve its popular character.”

Responding for the fleet, French skipper Fabrice Amedeo paid a warm tribute from the bow of Newrest Art et Fenêtres, “A big thank you for having had the courage to organize this Vendée Globe despite the health situation. I am very happy to be here and to now wait for the start, I am proud to be here with my boat.”

The health and safety of the 33 solo skippers is paramount. Most have their own measures and procedures in place limiting their interactions in confined and public spaces. So this was a special, unique moment when they mustered at the top of the race pontoon at 0900hrs this morning under benevolent blue skies and promising early sunshine for the obligatory, safely distanced photocall. It was likely the one and only time they will all be in the same space at the same time before taking the start. As well as a regular testing regime each is required to rigidly self-isolate for the final seven days before the start.

Race Director Jacques Caraes introduced the skippers in turn. The record entry, at 33 is three more than the 2008 high water mark. There are a record six women competing. For the eighteen rookies, opening day was extra special bringing mixed emotions. For them, with a race ready IMOCA on the dock the journey to be here is completed. Today’s reward is savouring the atmosphere, surrounded by the giants of solo round the world racing as well as fellow first timers. But at the same time comes the hard reality, the clock is ticking down to start day, the tension rises with each successive day and with it the enormity of the task.

Second timer Roman Attanasio (Pure-Best Western) added, “We've been preparing for four years, it always feels like something to be arriving and to be here in Les Sables d'Olonne. The ascent, coming up the channel before the start has as much symbolism for me as going out on start day. It marks the beginning of these three weeks in the start village. I feel ready, but the tension is building, in this very particular year.”

And lined up on along the dock an eye popping level of shiny round the world race-boat technology, seven latest generation, new build foiling IMOCA 60s from four different design studios.

Britain’s Alex Thomson (HUGO BOSS) at his fifth Vendée Globe start looked relaxed as he spoke briefly from the deck of his futuristic black and pink IMOCA before returning by RIB to his isolated lair.

“My boat is exceptional, like many other boats here in Les Sables d'Olonne. We have had a very particular year, with much shorter preparation time but we are very happy to be here,” said Thomson who has not raced in any of the preliminary races in France this season and so remains an unknown threat to his podium rivals.

French national health regulations may have limited visitor numbers to 5000 at any one time on the expansive 30,000 sq m site but this prudent constraint has in no way limited the range of interactive exhibitions and displays. A visit to the Vendée Globe start village and especially to wander the race pontoon remains a memorable day out for visitors of all ages.

Yves Auvinet, President de la SAEM Vendée and the Département de la Vendée: “There is real joy in seeing our 33 skippers, their boats and their teams present along the Vendée Globe pontoon. Seeing them here, in Vendée, these wonderful machines and their experienced or rookie skippers, adventurers or fierce competitors alike is a source of pride for the Department of the Pays de la Loire region and the city of Sables d'Olonne. It is also a relief, given the health context. The Vendée Globe teams, and the state and health authorities, partners and all the sports projects have worked hard to make sure the Everest of the Seas runs this year, and for the Vendée Globe to preserve its popular character.”

Christelle Morançais, President of the Région Pays de la Loire: “The Pays de la Loire region is proud to be an historic partner in this unique human adventure. This legendary race is an integral part of the region’s identity: resolutely modern, innovative, and imbued with the eternal values of daring, courage and freedom. In this unique 2020 edition, 33 solo sailors will leave the waters of the Pays de la Loire on November 8. They will come back, richer from a sensational intimate adventure that they have been able to share for two or three months. I have a special thought for the six women who will take the start and for the six skippers and boats who will wear the Pays de la Loire corporate colors across the planet.”

Patricia Brochard, Co-President of Sodebo, official partner of the Vendée Globe 2020: “This ninth edition will take place thanks to the energy and the collaboration of everyone and I would like to thank the economic supporters, all the institutions, partners and of course skippers and their sponsors. We are all happy to launch the event today and to be able to share with the public these extraordinary stories of these sailors who in 3 weeks will set off, for their solo round-the-world race. Inevitably this edition will be different from the previous ones but it shines as a strong and positive symbol committing us to continue to all move forward together despite the storms.”

Yannick Moreau, Mayor of Les Sables d’Olonne, Président de la Communauté d’Agglomération des Sables d’Olonne: “This popular Vendée Globe festival starts today here in Les Sables d'Olonne, and it will last until the day of departure, November 8. You can just Imagine the great pride of our people of Les Sables d’Olonne welcoming the most legendary of sailing races, for the 9th time! For several months, the organization and the services of the City and the Agglomeration of Sables d'Olonne have shown considerable responsibility developing in the best way for the region of Les Sables and the Start Village to operate and welcome visitors, safely within the framework of the constraints of hosting public events. Thanks to everyone's efforts to respect the health precautionary measures, we are continuing to organize the Start Day.”

Ari Huusela (FIN, STARK): “I am very excited to be here. This has been my dream for 20 years. I have been here to see five starts since 1996 and now finally I am here with my own IMOCA and so I am really happy.”

Kojiro Shiraishi (JPN, DMG Mori): “I have been looking forwards to this day to be able to say hello to everyone here in Les Sables d’Olonne. This is the first time I have had the chance to build a new boat and I did not think it would be so hard to get here with it, but here I am I am very happy with the boat. Today feels like the start line is near. And I have to finish this time. We are early yet with this new boat and I am aware it takes more than a year to have it as a really good boat but I am happy to be here.”

Pip Hare (GBR, Medallia): “I am blown away to be here. Look who is around me, it is amazing to be surrounded by these sailors and their boats. I appear to have my picture on the side of a building and saw pictures of myself in bars, so it feels very real now. But these last few weeks I have gone from focusing on getting here today to being on the start line, to thinking more about finishing the race, and that is scary because all of a sudden you have made the start and now you have to finish the race and that brings a whole lot of new stress. I want to finish so much. But you look at the reality and the statistics and it is tough to engage with that. But today is a day to enjoy it. Most of all today it was nice to catch up with Didac Costa who I raced against in the Mini in 2011 and I beat him by 40 minutes, so I have not issued a new challenge to him, yet!”

Fabrice Amedeo (Newrest – Art & Fenêtres) ” I have three objectives: to race this beautiful Vendée Globe which promises to be very open, to share this adventure widely since I am a former journalist and to fulfill an oceanographic mission since I have a sensor to feed information about the Ocean to the scientific community that follow my project.”

Jérémie Beyou (Charal): “This is my fourth participation in the Vendée Globe and so I feel almost like I drop into my little habits in Les Sables d'Olonne. But it is always exceptional to be here at the Port Olona pontoon among these magnificent boats. It is a privilege for me, for my team, with whom we will be enjoying this superb village over the days to come.”

Sam Davies (GBR, Initiatives-Cœur): “I am very happy to be here and surrounded by these magnificent boats. I am ready to go pretty much. I am lucky to be here with a project that I have been preparing since the last Vendée Globe so that feels a long time but I have been involved at every stage of the evolution of this boat. There have been a lot of miles to train but now I know it inside out and so I am lucky to be here not just with a competitive project but one which supports a charity. I have two big objectives and of that I am really proud.”

Damien Seguin (Groupe Apicil): “Fifteen years ago I was denied access to ocean racing because of my disability. Today here I am on the dock with my boat at the famous Les Sables d'Olonne pontoon. So that is to say if things have turned out well. With my sturdy boat, I'm ready for this big adventure!”