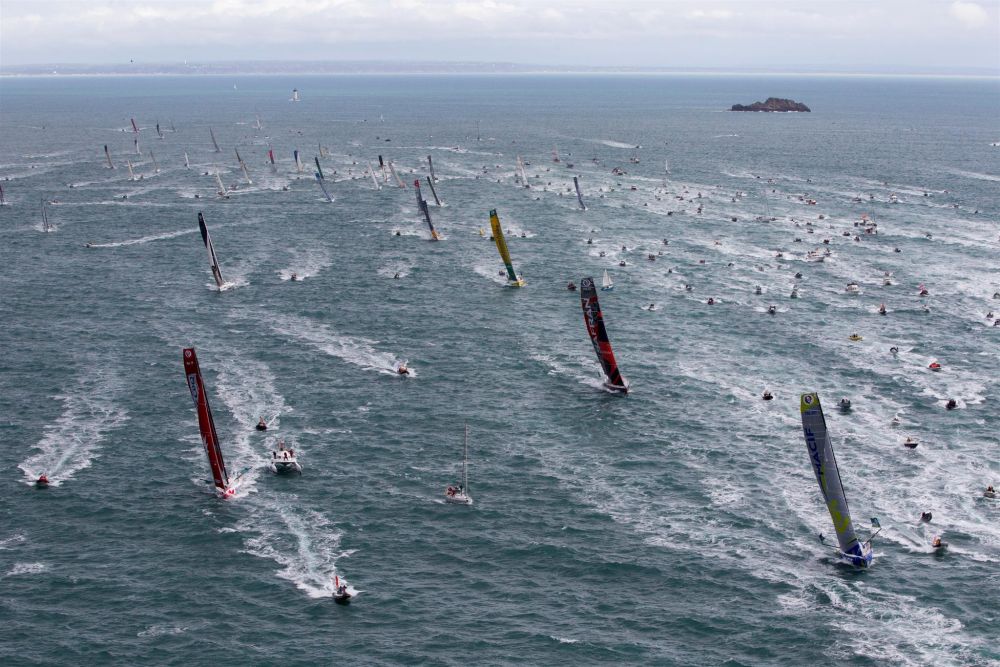 The start of the Route du Rhum - Destination Guadeloupe 2014 with an impressive spectator fleet.

The Route du Rhum-Destination Guadeloupe – one of the classic races in solo ocean sailing – is set for a record entry this year as it celebrates its 40th anniversary.

Charting a 3,542-nautical mile course from Saint-Malo in Brittany to Point-à-Pitre on the French Caribbean island of Guadeloupe, the Route du Rhum was first held in 1978 and has since established itself as one of the big targets for the world’s top solo ocean racers.

This year’s race starts on November 4th and will be contested by 125 male and female skippers in six classes, headlined by the super-fast and spectacular giant Ultime trimarans, four of which will be flying for the first time on their foils.

There is also a very strong line-up in the IMOCA fleet, and a highly competitive Class40 division which accounts for almost half of the total entry. The remainder of the fleet is made up of the Multi-50 multihull class and a “Rhum” class of amateur entrants divided into multihulls and monohulls.

Race organiser Hervé Favre, Co-Chief Executive Officer of OC Sport, the Anglo-French event creation and management company which owns and runs the four-yearly race, said this is going to be a very special year.

“We are delighted to see such an incredible turn-out across the six classes to mark the anniversary,” said Favre. “This is the eleventh race in Route du Rhum history and the sheer size of the fleet in monohulls and multihulls will make for a unique spectacle both at the start and for fans to follow online.

“The course has become a classic of its kind and we expect – if the weather co-operates – that the outright record held by French sailor Loïck Peyron of seven days and 15 hours may well come under threat,” added Favre.

The race often begins with rough conditions in the English Channel and as the fleet crosses the northern fringes of the Bay of Biscay where many competitors have experienced boat-breaking seas in the past. Then, as the skippers head further west, they come under the influence of the northeast trade winds that can offer a fast downwind passage to the Caribbean.

The majority of the sailors entered this year are from France but there is a sizeable contingent from elsewhere including skippers from Britain, Belgium, Germany, Switzerland, Japan, Finland, Sweden, Italy, South Africa and the United States.

Undoubtedly much attention will focus on the Ultime category – an astonishing collection of fully flying trimarans that can travel more than 850 miles in a day. The line-up of six skippers in this division reads like a who’s who of the greatest solo sailors racing today.

The favourite will be the golden boy of French sailing Francois Gabart, fresh from his 42-day solo round-the-world record in 2017. Gabart won the Route du Rhum – Destination Guadeloupe in 2014 on an IMOCA monohull.

“I have a very strong memory of my only participation in 2014, including the arrival in Guadeloupe,” said Gabart. “It was just magic: first an olfactory memory with all the smells of the earth arriving early in the morning; then the victory that I really went looking for despite the loss of my spinnaker – I was exhausted.”

Among the favourites in the 22-strong IMOCA fleet will be Britain’s Alex Thomson on Hugo Boss who finished in second place in the last Vendée Globe race and is currently awaiting delivery of a new boat for the next Vendée in two years’ time.

Thomson has never competed in the Route du Rhum-Destination Guadeloupe and he will be looking to try to repeat the feat of fellow countrywoman, Dame Ellen MacArthur, who won the race in the IMOCA fleet in 2002.

“Up until now it’s always been complicated to do the Route du Rhum, which didn’t fit into our programme. This year, there’s a space in our schedule and it’s time for me to compete in it,” said Thomson.

Among his rivals for glory will be the French skipper Jérémie Beyou who has just won the Volvo Ocean Race as part of the crew of Dongfeng Race Team. Beyou will be trying out the very latest foiling IMOCA design – his new boat named Charal – and his performance in the Route du Rhum – Destination Guadeloupe will be watched carefully as a form guide for the Vendée Globe.

“The aim is to discover what the boat can do, but not in delivery mode,” said Beyou. “I need numbers, to see what she’s made of and to compare my performance with the others. As such, the idea is to put her through her paces.”

In the Class40 monohull division there will be stiff competition in a massive 53-boat fleet with the French sailors Maxim Sorel and Nicolas Troussel likely to start among the favourites. Giving them a run for their money will be two British skippers in this super-competitive fleet Phil Sharp, Sam Goodchild.

The race village at St Malo opens on October 24th with the race starting on November 4th.