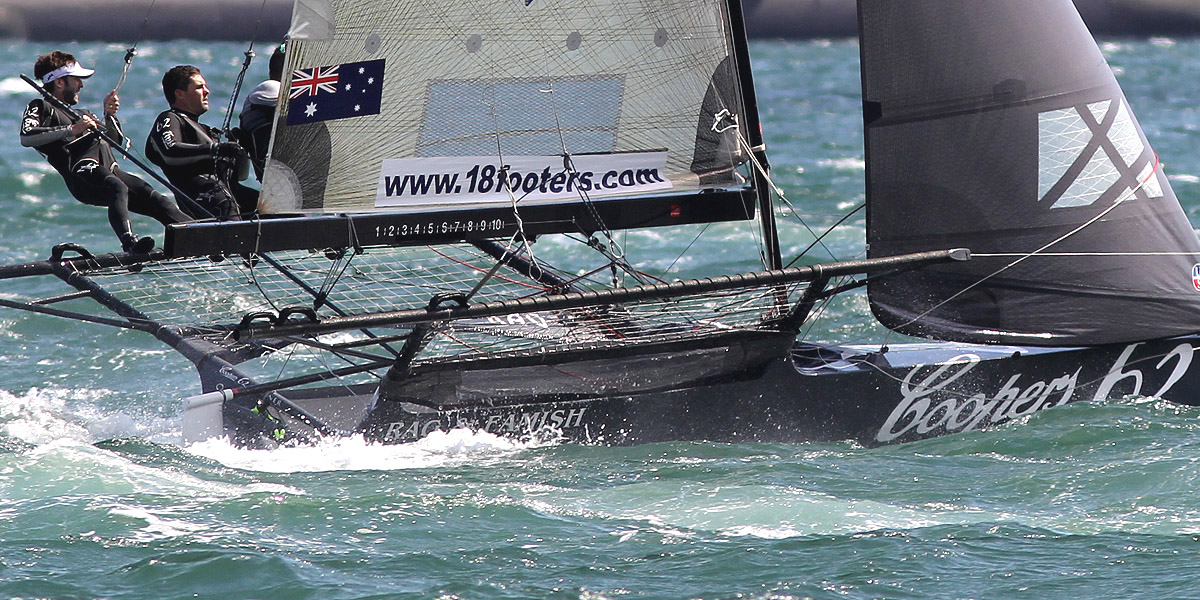 The power of the winning crew as they race to victory in Race 3 of the NSW 18ft Skiff Championship. Photo 18 Footers League.

The experienced crew of Jack Macartney, Mark Kennedy and Dave Ewings gave a brilliant performance of heavy weather sailing when they combined to bring Coopers 62-Rag & Famish Hotel home as winner of Race 3 of the NSW Championship on Sydney Harbour today.

A 25 to 30-knot Westerly wind pounded the fleet but the Coopers-Rag team were faultless, but for one very brief capsize during the hour long race. With tired crews battling to complete the course behind them, The Rag team took the honours by a mammoth 19m33s from Asko Appliances (Marcus Ashley-Jones, Steve Thomas, Jeronimo Harrison).

Smeg won the start and led to the windward mark off Kurraba Point. The current JJ Giltinan (world) champion Smeg team then produced a brilliant downwind exhibition as they raced to the wing mark off Clark Island ahead of Coopers 62-Rag & Famish Hotel.

An unlikely capsize by Smeg near the mouth of Double Bay on the following windward leg allowed Coopers 62-Rag & Famish Hotel to grab the lead and leave Smeg to battle with Asko Appliances for the minor placings.

The race was more a battle of survival than tactics as several skiffs capsized many times in the tough conditions.

Race 4 of the NSW Championship will be sailed next Sunday.  The Australian 18 Footers League will have its usual spectator ferry available to follow all the action. The ferry is also available throughout the entire 2016-2017 season, leaving Double Bay Wharf, alongside the clubhouse, at 2.15pm.