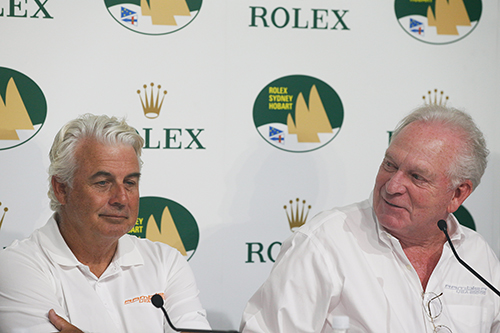 For a few sailors the Rolex Sydney Hobart is all about getting there first, but for the bulk of the fleet only one thing will really make it a Christmas to remember – a vaguely baroque silver chalice, bedecked with mermaids in place of angels, called the Tattersall’s Cup – awarded to the overall winner.

Over the last 70 years many gifted sailors have won this Cup, and just as many have not.  The Cup may be Australia’s premier yachting trophy, and it really is one of Australian sport’s most damnably difficult pieces of silverware to win.

Victoria’s Bruce Taylor is often called one of the best sailors never to win a Hobart…  He and his loyal crew come back in Chutzpah after Chutzpah. They have come so close, but the windmill always seems to parry his charge at the last moment. Like some sort of salt-soaked Dame Nellie Melba, each year is Bruce’s last, but never is.

Ed Psaltis and Bob Thomas won the horrific 1998 race, but once is never enough. Last year was definitely the last time though.  Absolutely. Except Midnight Rambler will be back on the start line on Saturday – with Psaltis aboard.

It is a ravenous bug if it bites you.  Matt Allen has two, count them, two Ichi Bans entered this year: a TP52 and a Carkeek 60. Which one he takes will depend on the race forecast and the type of boat the prevailing weather will favor.

“I think one of the issues of this year’s race is that the weather beyond the first front is still uncertain. We were thinking that this morning we would have a good read on it, but we still don’t. We’ll sit down and have a look, maybe make a decision this afternoon, or maybe drag it into tomorrow morning.

“It was always a 60 percent chance we’d take the 60 footer. It’s at least that chance now if not higher.”

And that’s the thing, so much depends on how the weather patterns pan out.

If it is a fast race, with lots of reaching and running, and the big super maxis can completely break away from the fleet on day one, so that the line honours winner can also win overall. Wild Oats XI has done it twice. That sort of scenario is what American George David is hoping for this year.

The American’s 88 foot speedster Rambler is unlikely to cross first;  the 100 footers are just that little bit faster on most points of sail, but the biggest boats are also the first to have to throttle back a bit when the conditions worsen, and they have to finish four hours ahead of Rambler  to beat her on handicap.

“If this is a big boat race, we have a reasonable chance,” George told a press conference today at the Cruising Yacht Club of Australia. “We will be buzzing around their heels and annoying them all the way.”

“You have to finish to win,” chimes in Brad Butterworth, one of the stars in Rambler’s afterguard. “This is the toughest race in the world and there are always times when you have to throttle back and preserve the boat.”

Typically though, the rhumbline to Hobart isn’t a big boat dragstrip. The Rolex Sydney Hobart is in fact one of the most tactically complex races in the world. It favors all round yachts over chic downwind sleds or grumpy IOR up-wind battlers. In recent years it has looked very kindly on mid-sized boats in the 45 to 60 foot range.

Darryl Hodgkinson won in 2013 on his canting keeled Cookson 50 Victoire. “There’s a lot of competition in the 50 footers this year. The nine or 10 TP52s will be our main rivals. With the wonderful race website these days you can watch the boats in front of you. They often tell you where not to go.”

“If we can stay in touch with Victoire, if we can see her throughout the race, we will be doing very well,” says Tony Kirby, whose Ker 46 Patrice is another mid-sized race favorite.

“Hope you can’t,” Darryl shoots back.

A lot is going to depend on how well the boats handle the NSW coast on the first day. When the strong southbound current runs against a strong southerly wind the sharp, steep waves can be boat and crew breaking.  And that is exactly what is in store for the fleet on Saturday night.

“It is going to be a real boat management and crew management exercise to get the boat through that really quickly without breaking it. There are certainly going to be some breakages this year so you have to make sure you aren’t amongst them, but you also have to be pushing hard enough to have a chance of winning the race.”

The weather models are still so unclear. Will there be a second southerly on Sunday in Bass Strait, and what sort of seas will it throw up. This year could still be a year for the back markers, a small boat race.  A long, up-hill slog the first few days, with the wind freeing up for the tail-enders after the hot-shots have tied up in Hobart.

That is sort of what happened last year when Roger Hickman steered his beloved 30 year old Wild Rose to victory after light, slow and early conditions freshened up to give tail enders a rip-roaring ride home.

‘Hicko’ would love to make it two in a row, and will devour that first southerly with relish. But he just doesn’t know what the second front will do, let alone what will follow. “It’s a complex race,” he says. “You pick a corner, and hope the corner does well.

“The maxis finish so far ahead of us, anything can happen between when they get there and we get there.”

Wild Rose is testament to the genius of the handicap system. You really don’t need to have the newest, fastest, biggest boat to get your hands on the Cup. It is a bit of a lottery, in one sense, though the winning ticket is always held by the crew who have sailed their yacht to its limits.

So why do it? Why enter two boats, why bring a boat from the other side of the world, why bash your way through cold seas for days on end?

“Because it’s the ‘Great Race’,” George David beams. “That’s all you need to say.”