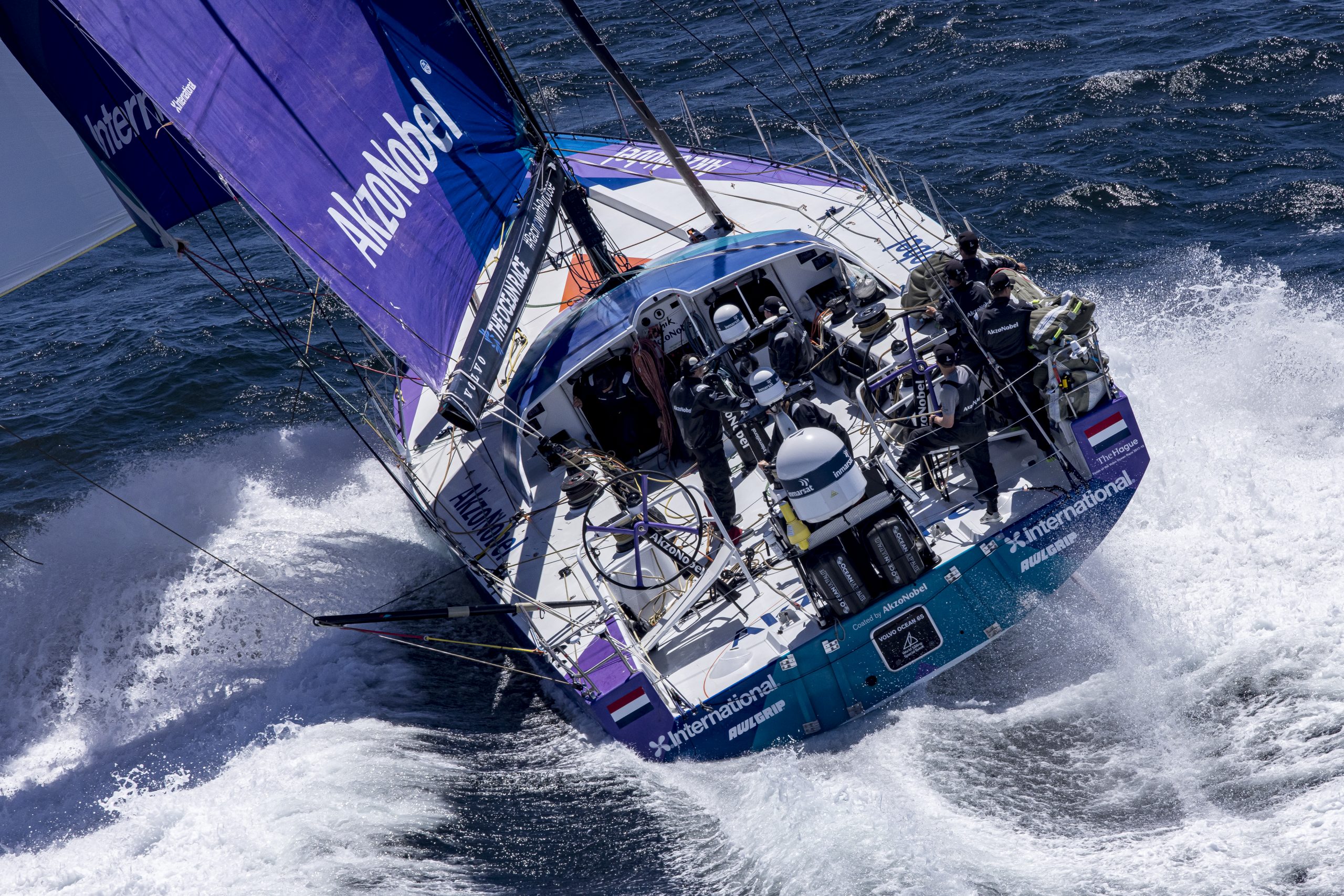 A day after leaving Cascais, Portugal on the second leg of The Ocean Race Europe, this afternoon the race’s 12-boat fleet battled fierce headwinds in the Gibraltar Strait – the narrow and congested waterway dividing mainland Europe from north Africa – on their way to Alicante, Spain.

One of busiest commercial shipping routes in the world, the Gibraltar Strait marks the crews’ transition from the vast expanses of the Atlantic Ocean to the enclosed waters of the Mediterranean Sea.

As expected, strong easterly headwinds gusting over 40 knots made for brutal conditions for The Ocean Race Europe yachts for the three-hour Gibraltar Strait passage.

The five IMOCA and seven VO65 crews had made short work of the opening stage of leg two. They enjoyed mostly fast downwind conditions on their way south along the Portuguese coast to Cape St. Vincent, before they turned south-east overnight, and this morning began to feel the effects of easterly headwinds flowing from the Mediterranean on the beat across the Gulf of Cadiz.

Mirpuri Foundation Racing Team (POR), skippered by France’s Yoann Richomme, made much of the early running among the VO65s during the first night at sea on leg two.

Richomme’s international crew of men and women led until around 40 nautical miles (nm) from the Moroccan coast where they ceded the lead to Sailing Poland, led by Bouwe Bekking (NED).

“We are in the Strait of Gibraltar and are actually on the Moroccan coast and currently Sailing Poland is in the lead so that’s quite nice, but it has been very, very windy,” Bekking said on Monday afternoon.

“We saw up to 46 knots. Right now the breeze is going down a little bit, but it is still a stiff 30 knots. Battling with Mirpuri Foundation Racing Team just behind us and then the IMOCA LinkedOut is just a little bit further offshore and AkzoNobel Ocean Racing has crossed to the other side, so we have to see how it is all panning out in the next 10-12 hours.”

Ever since leaving Cascais on the second leg, two French teams – Thomas Ruyant’s LinkedOut and Louis Burton’s Bureau Vallée – had engaged in a fascinating downwind match race at the front of the IMOCA 60 class.

The pair had never been more than a few miles apart until, as they tacked north close to the coast of Morocco, a problem on board Bureau Vallée dropped them back behind Robert Stanjek’s non-foiling Offshore Team Germany (GER), and Nicolas Troussel’s CORUM L’ Epargne (FRA).

“We’ve got 38 knots which is a bit over the top,” Clarisse Cremer said from on board LinkedOut.

“But it doesn’t matter because we are going a bit faster, doing many, many tacks between Spain and the African coast, a tack every ten and fifteen minutes, so everybody is up on the deck. We want to go as fast as possible which is a bit tiring as nobody is able to have a nap or anything because we have to be as efficient as possible.”

Meanwhile, Charlie Enright’s 11th Hour Racing Team (USA) has made remarkable progress since restarting racing yesterday afternoon, sailing without a port foil, which was damaged in an incident with an anchored boat shortly after the start of leg two.

“We’ve restarted Leg 2, on our way to our Alicante, with everybody safe and sound,” Enright noted. “The objective is to keep it as close as possible here to push the boat within reason and see if we can get a couple of points and keep this show on the road and not throw in the towel.”

Having set off 77nm behind the pack yesterday, this afternoon they were just 36nm behind LinkedOut as they closed in on the Gibraltar Strait.

Prior to the start of leg two there had been much discussion in Cascais about what the winning strategy might be for negotiating the Gibraltar Strait. The consensus was to pick a side: either south, short tacking along the Moroccan coast; or north, doing the same along the Spanish shoreline – and nothing in between would do.

Led by Sailing Team Poland the bulk of the VO65 crews opted for the southerly option, but two of them – first Erik Brockmann’s Viva México (MEX), and then AkzoNobel Ocean Racing (NED) – made a break to the north in the hope of smoother sailing.

In the IMOCAs the LinkedOut and Offshore Team Germany crews kept a close eye on each other along the southern route, while the third-placed CORUM L’ Epargne sailors tried their hand on the northerly route.

In the end there appeared to be little to choose between the north or south options. At 1300 UTC today as the leaders cleared the exclusion zone formed by the Gibraltar traffic separation zone and began to converge again, the Sailing Team Poland VO65 held a lead of a fraction more than one nautical mile over AkzoNobel Ocean Racing in second.

Emerging from the Gibraltar Strait racing bow for bow with the Polish leading VO65, the crew of the LinkedOut IMOCA 60 had established a healthy 10nm / 19km lead over CORUM L’ Epargne and Offshore Team Germany in second and third respectively.

Conditions are expected to moderate for the fleet as it moves further into the Mediterranean tonight. With a little under 300nm still to race on this second leg, the fleet is expected to arrive in Alicante, Spain on Wednesday June 9. Although with light conditions forecast before the finish, this ETA could slide back.