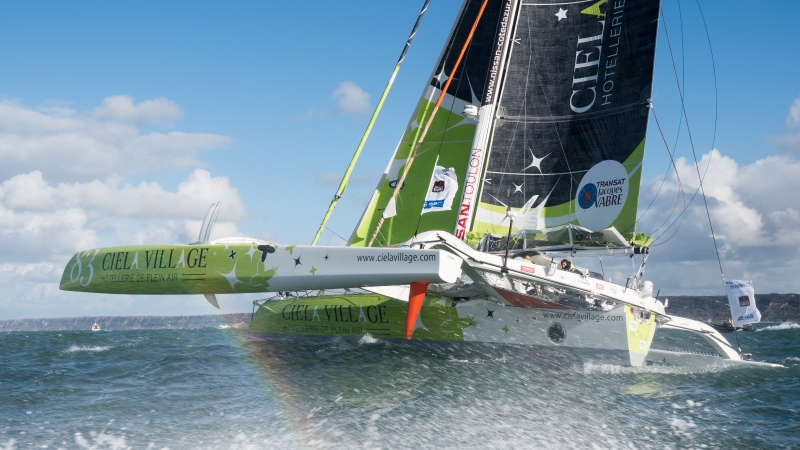 There may not be many of them but the quality is certainly not lacking in the Multi50 class that will start the 2018 Route du Rhum-Destination Guadeloupe solo transatlantic race from Saint Malo on November 4th.

Sailing their 15-metre foiling trimarans, the six competitors in this class all have their own points to prove as they make their way across the Atlantic on the 3,542-nautical mile course to the French Caribbean island of Guadeloupe.

In this division proven older boats will take on newer designs that represent the latest thinking in the class. For each of the sailor-boat combinations, whatever happens, it will be a full-on and highly competitive Route du Rhum-Destination Guadeloupe because the Multi50s are wet and fickle racing machines that can achieve average distances of over 500 miles in 24 hours.

The Multi50 class brings together trimarans of up to 15 metres in length and 15 metres width, that are subject to a class rule that leaves some freedom to attract different designers. In its desire to embrace the latest technological developments, the class has now separated from its “vintage” era and in 2017 authorised the addition of foils for the first time.

Five of the six multihulls in the running – all except that of Gilles Lamiré – are therefore equipped with foils this time. Three of them added one-design foiling kits to old hulls, while the two newest trimarans, Ciela Village and Solidaires en Peloton Arsep, were designed from scratch around the new “flying” game.

The foils have boosted the speed of the boats by about 20% on a reach, with regular accelerations to over 35 knots. Thibaut Vauchel-Camus even surpassed the 40-knot mark during a delivery this year.

If the weather is favourable, the Multi50s could cross the finish line at Pointe à Pitre in the wake of the Ultimes, after as little as eight-10 days of racing. That would be an improvement of at least one day compared to the current reference time for the class of 11 days, five hours and 13 minutes.

These numbers give a good indication of ​​the fiery nature of the Multi50. “These are small boats on a human scale, but offshore they are a handful and compared to the Ultimes, we are hyper-exposed to the elements,” explains Erwan Le Roux (Window Mix-Buffet), winner in 2014 and President of the class.

“We have the highest power-to-weight ratio of all the fleets of the Route du Rhum-Destination Guadeloupe,” adds his opponent Lalou Roucayrol (Arkema). “The boats are extremely wet and to go fast, you have to just do it without thinking about it too much.” It is perhaps therefore not surprising that routing is allowed in this category.

So who will follow Erwan Le Roux and win this time round?

Perhaps himself. The title-holder has all the attributes of a man to beat. His enormous understanding of a boat he built when he was working with Franck-Yves Escoffier, his intimidating track record, his high-level physical preparation – he is also a triathlete – and his habit of leaving nothing to chance, make him the ideal candidate for a double.

However, Erwan does not see himself dominating and knows that Lalou Roucayrol, a former competitor in the Orma class before joining the Multi50s 11 years ago, will be a real threat. On the boat he built, Lalou won the Transat Jacques Vabre 2017 and finished on the podium in every race that season.

Behind these two great favorites, the other players include Thibaut Vauchel Camus, the “youngster” of the group at 40 years of age who won this year’s Drheam Cup-Destination Cotentin, despite his limited experience in Multi50s. Another newcomer in the class is Armel Tripon (Chocolate Rite). Like Thibaut, he is one of those who has sailed the most this year.

Then there is Thierry Bouchard at the helm of a very light, latest-generation Multi50, even if a major project carried out after the Transat Jacques Vabre prevented this entrepreneur from sailing as much as he would have liked. Finally, do not underestimate Gilles Lamire (French Tech Rennes Saint-Malo). This regular competitor in the series is a tough guy who believes in his chances on the less “modern” trimaran of the fleet – but he knows his boat by heart.

The Multi50 class at a glance

The winners of the Route du Rhum-Destination Guadeloupe in Multi50s