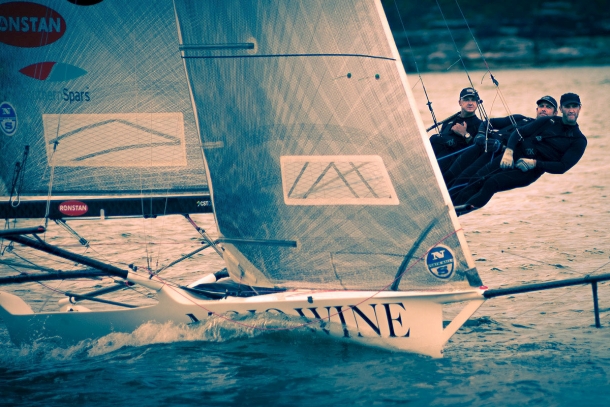 Determined looks on the faces of the Mojo Wine crew. Photo Chris Part.

One of the great strengths of 18 Footer Racing over its 120-plus history has been the family involvement on a competitive level and the support of family members from the unique spectator ferry provided by the Australian 18 Footers League.

With the 2015 J.J. Giltinan 18ft Skiff Championship less than one week away, the tradition will continue as the spectator ferry supporters cheer on the highly competitive Mojo Wine team.

The Racing Team of Lee Knapton, Mike McKensey and Ricky Bridge will certainly give their cheer squad plenty to enthuse about as the trio came within 50 metres and 5secs. of winning the recent NSW 18ft Skiff Championship in their first season together in an 18.

Lee Knapton has won three consecutive Australian 16ft Skiff Championships (2012-2013, 2013-2014, 2014-2015).  The latter of these three wins came earlier in the current season when he skippered Brydens Compensation Lawyers to victory at Belmont.

The win gave Knapton his seventh title overall, and he is the most successful skipper in 16ft skiff history.

Lee has shown that his 16 footer successes will be continued in his 18ft Skiff career.  Since winning the recent 16 footer title he has led his Mojo Wine team to victory in Club and NSW Championship race wins as well as the narrow loss to Mike Coxon’s Thurlow Fisher Lawyers in the recent NSW title.

He seems to be enjoying the move to the 18s and is obviously benefitting from the ferry support. “The support and cheers from the ferry are motivating and remind us of the wonderful support we are provided.  We really appreciate the support and try our best to give our fans something to cheer about”, Lee said.

Tina says:  “It is always a great day out on the ferry.  I'm in a unique position, in that I cheer on two boats each and every week.  It's evident how much support there is for the sailors by the growing number of spectators and the mums, dads, wives and kids that are always present”.

Ricky Bridge has won four Australian 16 Footer Championships, has sailed with Lee Knapton for six seasons and has also been a regular crewman on the Mojo Wine skiff for three seasons.  He is fully supportive of the family involvement in the 18s:

“The 18s League is rich in history and its survival is due to the passion that people have for the class and the club.  Family are integral to all of us and the club do a wonderful job catering for them with the ferry.  The club and the supporters make this class the most attractive, enjoyable and iconic sailing on Sydney Harbour. To share this experience with my boys is very special to me”.

Megan Bridge is totally supportive of Ricky and the Mojo team and what they mean to the family:  “Taj and Beau have been around sailing since they were born and this has had an extraordinary impact on them.  Weekly ferry spectators, forever willing shore crew and religious viewers of 18ft skiff TV on a Monday morning, and Taj and Beau are only 3½ years and 2½ years old. The 18ft skiff sailors are my boys heroes in a class they already dream to be a part of.  As a mum, I love seeing their ongoing obsession with sailing.  As a wife I love seeing Rick and the guys having fun and forever challenging themselves”.

Three years ago Mike McKensey approached the Australian 18 Footers League about the management of the Mojo Wine 18ft Skiff Racing Team, and together with Ricky Bridge has moved to campaign level to its present high standard.

Ricky encouraged his good friend Chris Nicholson to skipper Mojo Wine in 2013-2014 and this year was instrumental in engaging Lee Knapton as skipper.

Mike knows that to put a successful campaign together it needs more than just a quick boat:  “A boat campaign not only brings together a crew, it brings together our families who support us every weekend.  This support is wonderful both when we are on the water and when we come ashore.  Always cheering for us and congratulating us regardless of the final result”.

Mike’s wife Susie agrees:  “Mike and Rick grew up sailing on Lake Macquarie and Rick joined Mike on Mojo Wine three years ago.  This year we welcomed Knappo and Tina to the campaign.   We all get on well and our families have enjoyed catching up every weekend both at the club and on the ferry”.

If the Mojo Wine skiff takes out the 2015 JJ Giltinan 18ft Skiff Championship on Sydney Harbour next week (14-22 February) the presentation of the blue ribbon alongside the spectator ferry will be some celebration.