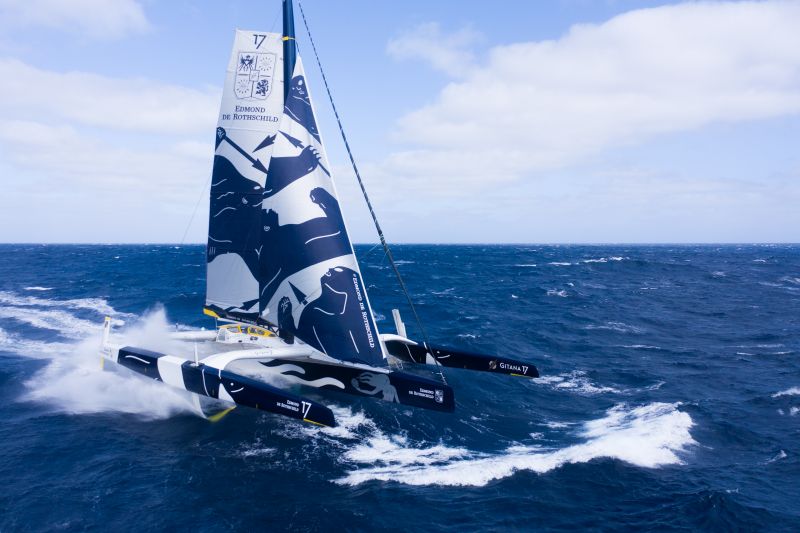 25/11/2020
Lorient, wednesday, November 25, 2020 – Leaving Lorient shortly after 21:30 hours local time on Tuesday 24 November, the men of the Maxi Edmond de Rothschild launched onto an express delivery trip up to Ushant and the start line for their first Jules Verne Trophy attempt. Four hours later, the latest addition to the Gitana fleet was awaiting a front to roll through to set sail on the theoretical 21,760 nautical miles that make up this long, looped circuit around the planet.
At 03:26 hours, the Cammas-Caudrelier pairing and their four crew finally set the stopwatch going and quickly left the north-west tip of Brittany in their wake. With a time to beat of 40 days 23 hours and 30 minutes, held by Francis Joyon and Idec Sport, the sailors in Gitana Team will have to be back offshore of Brest again before 5 January 2021 at 02:55 hours if they are to stand a chance of becoming the 10th crew in history to secure the prestigious round the world sailing record.
They were in a hurry to get going. None of the six men made any secret of their satisfaction at finally casting off and setting sail for the start zone for the Jules Verne Trophy.
On Tuesday evening, in the Gitana Team’s base in Lorient, the pace picked up dramatically at around 19:30 hours for Franck Cammas, Charles Caudrelier, Morgan Lagravière, Erwan Israël, Yann Riou, and David Boileau. For the six sailors, on the alert for more than two weeks, there was no mistaking it. This time, everyone knew the time was ripe for a departure which will likely send the speedos spinning around the world in a race against the clock at the highest level of oceanic performance.
Already kitted out in their boots and foul weather gear, their headtorches already on their heads or close to hand, all six of them listened to the last precious weather information from the router Marcel van Triest. From his HQ, the latter confirmed that they could try to make their own luck on the route around the three capes, provided that they don’t dawdle and quickly snap up the weather window which, though not exceptional, gives them a chance of kicking off their circumnavigation of the planet in style by enabling them to make the equator in 4 days and 10 hours.

After really getting a shift on, dockside in Lorient at 21:37 hours, to cheers of encouragement from the team and their nearest and dearest in a joyful atmosphere where the group’s energy was already buzzing aboard the Maxi Edmond de Rothschild, the two skippers and their men made the start zone offshore of the island of Ushant at good speed.

After a few last manœuvres, they finally set off at 03:26 hours on the dot in 18 knots of NW’ly wind and three-metre waves.
Pre-departure impression

Charles Caudrelier, skipper: “It’s not such a bad departure, because in the end there hasn’t been the time for the pressure to mount. We were expecting to set sail at any given moment. It’s the Jules Verne Trophy and our target is less about the start and more about the finish. It’s the pre-race periods which are more stressful; the stress itself diminishes and then disappears once you’ve got down to the action. In our minds, we’ve already been prepared for a little while. This record is different to a race as we’ll kind of be doing battle against a ghost ship, even though there is another boat out on the water which we’ll be watching and monitoring. We know that we have an exceptional boat. If we have good weather, with a bit of luck we can secure a great time. This boat is really quick!”

Franck Cammas, skipper: “Completing this round the world is already a fine challenge in itself. Obviously, we’re hoping to beat the record and that’s why we’re setting sail. However, nothing could be less certain when you’re on the departure dock! What we’re hunting down in the South Atlantic is still shifting. We’re not sure that leaving on Thursday would be better than leaving now. We said to ourselves that it was risky to set sail before our rival in what is effectively an average weather window, and it’s less risky to set off behind them in an average window. It’s still an average window, but during my previous record, in 2010 with Groupama 3, we set sail with a very poor window and we ended up beating the record. Naturally, the ideal scenario would have involved the perfect window, but maybe that doesn’t exist for this winter. So, we’re already trying our luck this evening and we’ll see what happens…”

Morgan Lagravière, helm-trimmer: “I was expecting a slightly more rushed departure, not one like this! It took me two minutes to say goodbye to the family. It’s a bit intense at the time, but you’re very quickly down to the action. I’m already casting my mind forward to the actions we have to carry out, to the emotions we’ll experience and the positive emotion stirred up by the enormity of the challenge we have to take up. It’s an honour to be a part of this crew on this exceptional boat. To be aware of how lucky we are at times like these is important. I’m looking forward to crossing the line. As we’re not in a race, the competitive stimulation is a little different. As such, we’re going to be fully focused till we cross the line and then we’ll bring our competitive instinct into play to really push the envelope. Aboard the boat, we’re all competitive. This emotion excites us all, so we’re going to try to capitalise on all our training sessions, the technical work that has been done and the confidence of all those who support us.”

David Boileau, trimmer-bowman: “I’m happy to be setting sail and bringing this period of standby to a close. We’re ready for this departure. We’ve been waiting for this and training for this for a long time. It feels like a release. We’re going to head towards the line, prepare ourselves and get off to a good start off Ushant. For the first two days at sea, we’ll need to get into our rhythm and take things as they come, piece by piece, day by day. This is the mindset with which I’m setting sail on my first Jules Verne Trophy.”

Erwan Israël, helm-trimmer: “It’s my fourth departure on a Jules Verne Trophy attempt. This time, I hope it’ll be a lot faster than the others and, above all, that we’ll go all the way, because of my four attempts, I’ve completed the circuit just the once. A few months ago, over the summer, I still had some doubts about whether I would be aboard the Maxi Edmond de Rothschild for this attempt after injuring my leg. It took a while to heal and I felt a great sense of relief in the autumn when I was fully fit again and ready to go sailing. I’m ecstatic. I’m not here for a cruise though. I’m going to give my all. To secure a sub-40-day time would be the icing on the cake, but what counts is beating the record. It doesn’t matter if we finish with a lead of ten minutes or two days.”

Yann Riou, trimmer-mediaman: “It’s the first time that I’ve set sail on a round the world on a flying boat and perhaps ten years ago I wouldn’t have even understood the sentence! It's just great. I’m itching to cross the line. I think I’ll be doing a fair bit of media, video-photos at the start, then as soon as we get into a watch system, I’ll settle into my position as one of the crew aboard.”

The figures to note: