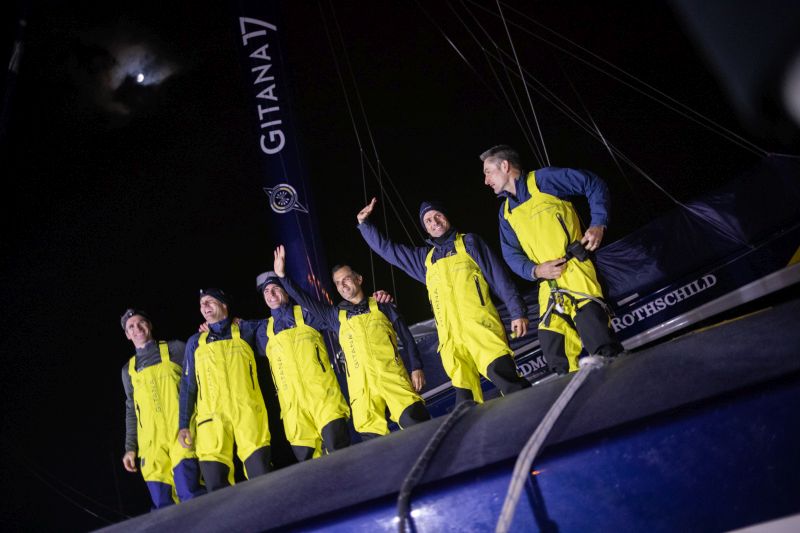 Lorient, wednesday, November 25, 2020 – It’s all going on in the Jules Verne Trophy! For Gitana Team, the time has indeed come to cast off and make for the start line offshore of Brest.

After a great deal of uncertainty, the decision to set sail on the quest for the outright round the world speed sailing record has finally been given the green light this Tuesday evening.

The crew of the Maxi Edmond de Rothschild left the dock at its Lorient base at 20:37 hours local time after some quick goodbyes in the chilly autumnal airs of this early evening. Franck Cammas, Charles Caudrelier, Erwan Israël, Yann Riou, Morgan Lagravière and David Boileau should cross the virtual line between Ushant and Lizard Point on the stroke of 03:00 hours local time on Wednesday morning.

It could only happen in the Jules Verne Trophy

This morning, after the weather briefing, the Cammas-Caudrelier pairing and their router Marcel van Triest had decided to postpone their departure, which was initially envisaged for late this Tuesday to give themselves the opportunity to adjust their target weather window and a potential slot on Thursday morning was mentioned. In this way, the crew of the Maxi Edmond de Rothschild remained on code yellow, on the alert.

However, the evening’s updates have speeded up the process somewhat. In fact, the latest grib files indicated that the departure slot was becoming narrower and that it was important to snap it up without delay. As a result, at 20:45 hours, the team made the switch to code green and one hour later, the silhouette of the latest addition to the Gitana fleet slipped away into the pitch black night, bound for Ushant and the start line of its first Jules Verne Trophy.

Franck Cammas, skipper of the Maxi Edmond de Rothschild: “This morning, we thought the weather models would remain fairly stable with the prospect of taking the start on Thursday morning, but we can see that between the American and European files, there is still a divergence of opinion. In the end, the departure window we’d thought about taking on Thursday morning is no better than the one we’re taking tonight. Waiting around comes with an element of risk, which we weren’t prepared to take, as the weather announced in the North Atlantic would then be less favourable.

“The fact that our direct rival has headed out on the water changes the situation a little, but it’s essentially the weather which is dictating our departure. We’re not rushing at it. It’s a window we were looking at. It’s not great and there is still some uncertainty. However, there are fewer and fewer reasons not to take it.

“The models are still diverging for the South Atlantic, but it really would be a shame to pass up the lingering opportunity that everything links together very nicely. We’re going for it and we’ll see if that’s how things play out. It’s important to remain open!”