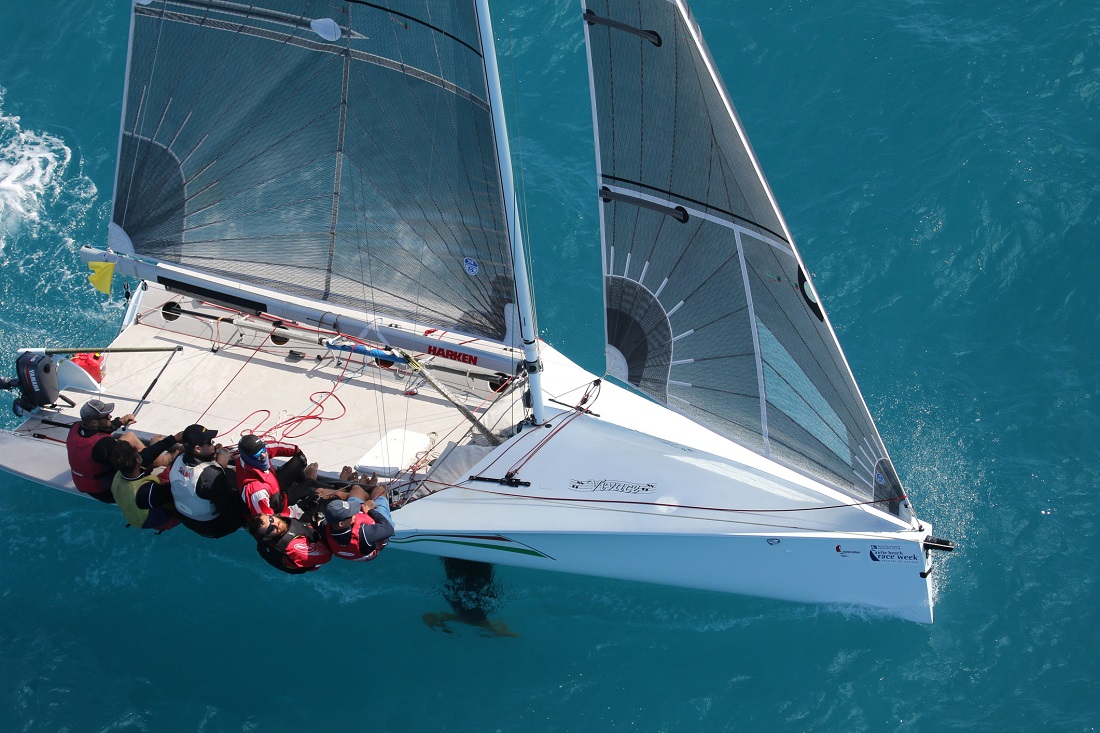 Day 4 at 2019 Airlie Beach Race Week and the 31st running of Whitsunday Sailing Club’s largest sailing event, which reels in the big tourism dollars to the region, hit a new high note today, with winds reaching in excess of 20 knots and gusting 24 at times.

And while it was a day of diamonds for some, the Lay Day was celebrated too hard by others with some dusty starts, slow tacks, equalling not the most brilliant results.

IRC Racing boats were the first cabs off the rank at 10.05am. Starting deep in Pioneer Bay, their course took in Hannah Point, Denman Island, White Rock, back to the Bay, then Bluff and the finish line.

Marcus Blackmore’s Hooligan prevailed over the other TP52, Zen (Gordon Ketelbey) by nearly three minutes on the water, but only nine seconds when the times were corrected out. Ray Roberts’ Botin 40, Team Hollywood, was third, making it an all-NSW show.

With two days of racing to go, Hooligan holds the upper hand over her class mate by three points. Team Hollywood is third by one point over Victorian yacht, Ponyo (David Currie).

Blackmore said this afternoon: “The courses here are good. We have a mixture – and I like a mixture. It’s a great place to race.

“Zen’s obviously our main competition here. It’s an older boat, but well sailed. They had the edge on us at the start today and we pretty well went round the top mark together. From there, we led, but it was close and could have gone either way.

“When we got around the Island (Denman), we ran out of air a bit, then at another point they ran out of air. It was an interesting race. A good day of wonderful sailing; we look forward to the next two days.”

Blackmore mused, “We won one race from Zen by 20 seconds and today by nine. It says how good Zen is and now accurate the handicapping is.”

On winning, he said: “Mike Fletcher (Olympic coach) gave me a lesson 20 odd years ago; ‘He who makes the least mistakes wins’. He’s right.

The Performance division, along with the Sports Boats, Cruising 1and 2 course also took in Hannah Point and Denman Island, but deviated to Roma Point, before heading back to Pioneer Bay, Bluff and the finish.

It was Whereswall 11 that took the gun today from Paul Jackson’s Keep on Running, a Thompson 870 that is having an up-and-down regatta. Both boats are from Victoria.

The Whereswall crew were thrilled. According to owner, Roger Jepson: “We got off the start reasonably well and the breeze suited us – we are a bunch of old blokes (average age of high 60’s), our junior crew is 61 years old – the oldest in his seventies – we didn’t have any more tacks left in us when we finished!

“We love it up here – this is our seventh year; the third with this boat. Our old boat is also here racing. It’s really competitive, the weathers fantastic and you don’t get a better part of the world to sail in. It’s lovely up here. We sail out of Brighton and we drive 2400 kilometres to get here, but it’s worth it.”

Tonight the prize presentation will take place at Northerlies, and all are looking forward to this first for the annual event. Northerlies is renowned locally as one of the Whitsundays’ premier venues for food, beverages, service and views

Full results in all divisions and all information: www.abrw.com.au.