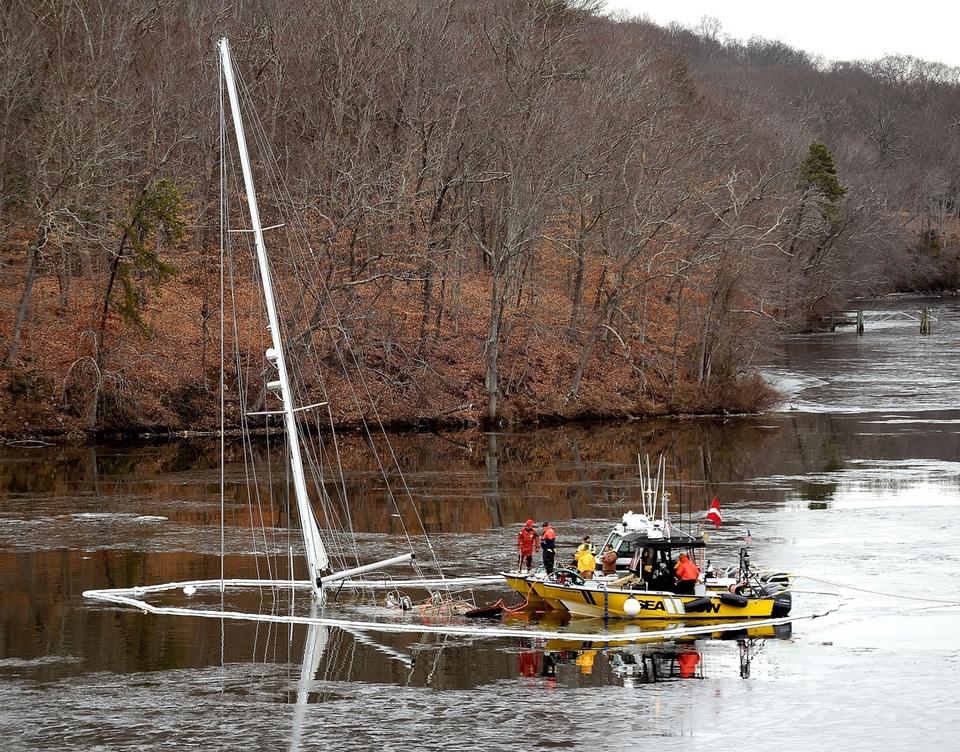 The Day, Connecticut. By Mary Biekert.

Lyme — A 53-foot sailboat that sank off the Connecticut River in Hamburg Cove’s icy waters late last month was finally raised and towed away, the U.S. Coast Guard said Wednesday.

As of 12:30 p.m. Wednesday, Sea Tow crews and divers were working to lift and drain the boat, a Coast Guard spokesman said. It was pulled out of the water by early afternoon.

The sailboat, which became an internet sensation after East Haddam resident Frank DiNardi on Jan. 27 posted a drone video of its sinking, has fascinated area residents, environmentalists, news outlets and boating enthusiasts.

“I think that it’s such a beautiful area and you don’t typically see a beautiful sunken sailboat there,” said DiNardi, who works for a local landscaping company. “It’s just so strange and bizarre and people are fascinated.”

DiNardi's video, which has garnered tens of thousands of views on YouTube, documents the beautiful blue-and-white boat before and after it sank. In both shots, the boat is surrounded by ice.

“The amount of response I’ve gotten over this video has been overwhelming,” DiNardi said. “You don’t leave something like that sitting around to sink to the bottom.”

Before crews arrived Wednesday, the boat had been sitting for nearly a month in about 10 feet of water with its mast sticking above the surface. It was being towed to Chester Point Marina in Chester, the Coast Guard said.

According to Coast Guard registration records, the boat, named Mazu, was built in 1987. It was federally registered in January 2019 and its homeport is listed as Newport, R.I. Area residents and boating enthusiasts say the boat is a “Little Harbor” sailing yacht, a well-known luxury boat brand.

Read the full story and see the video and more images at The Day.