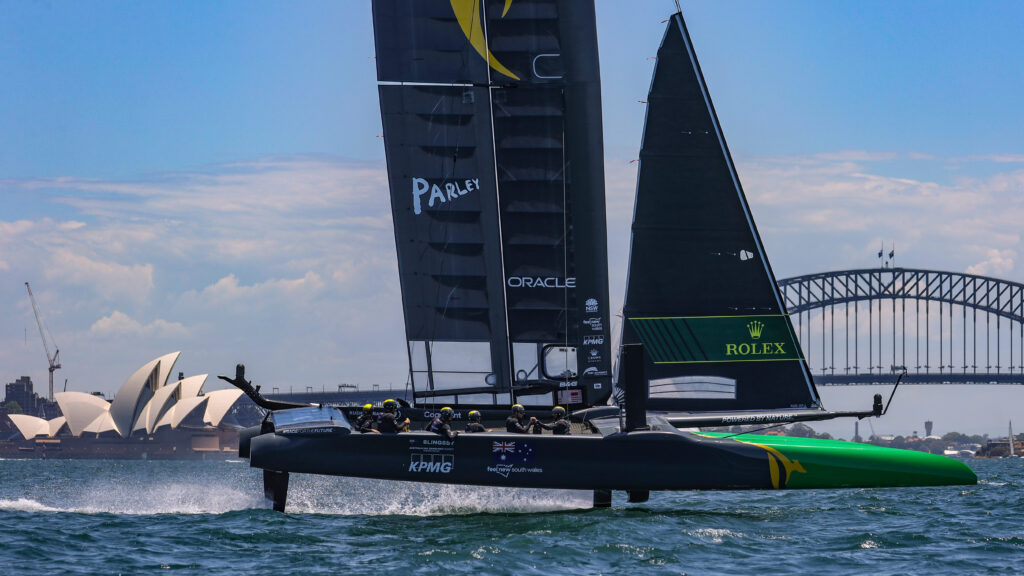 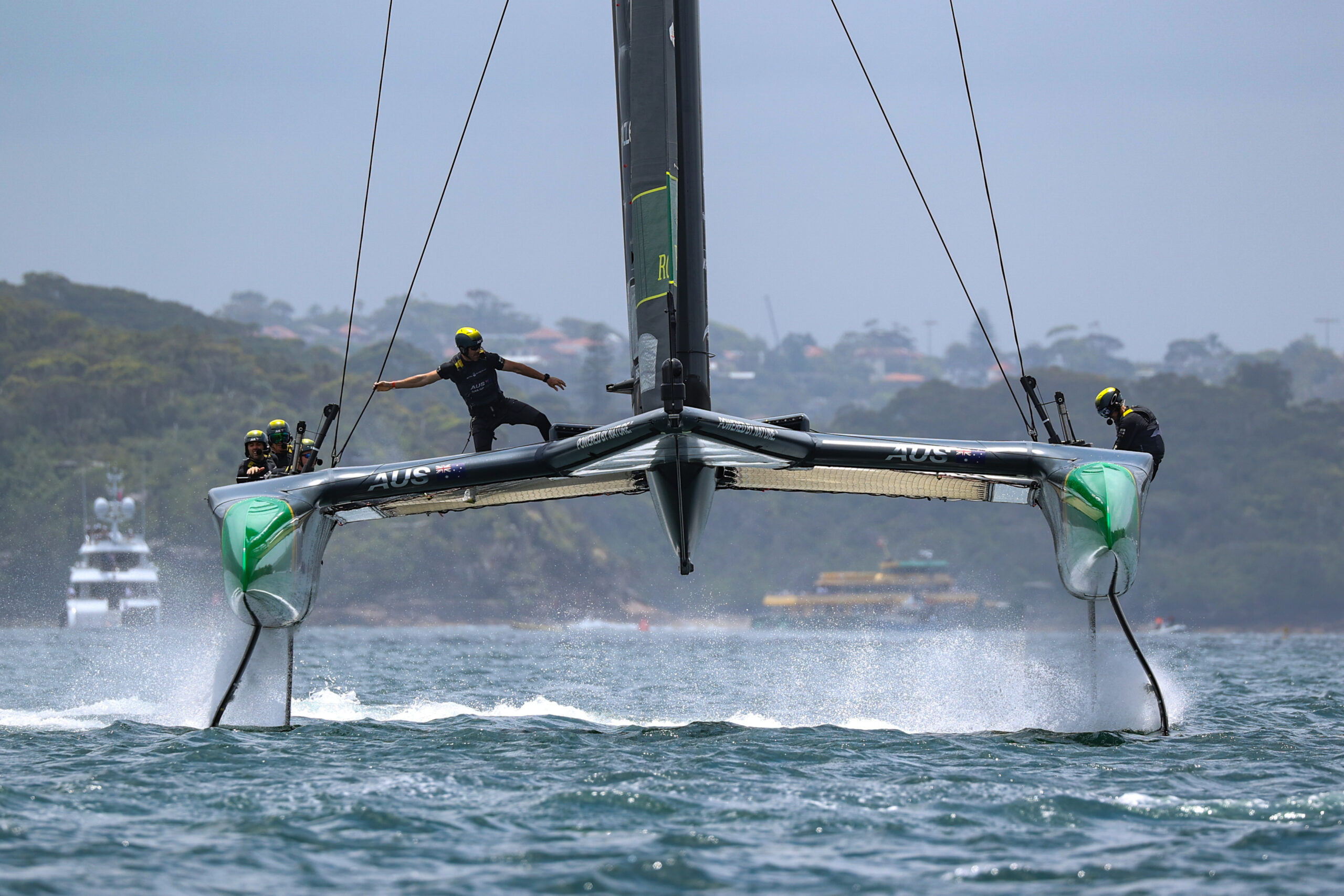 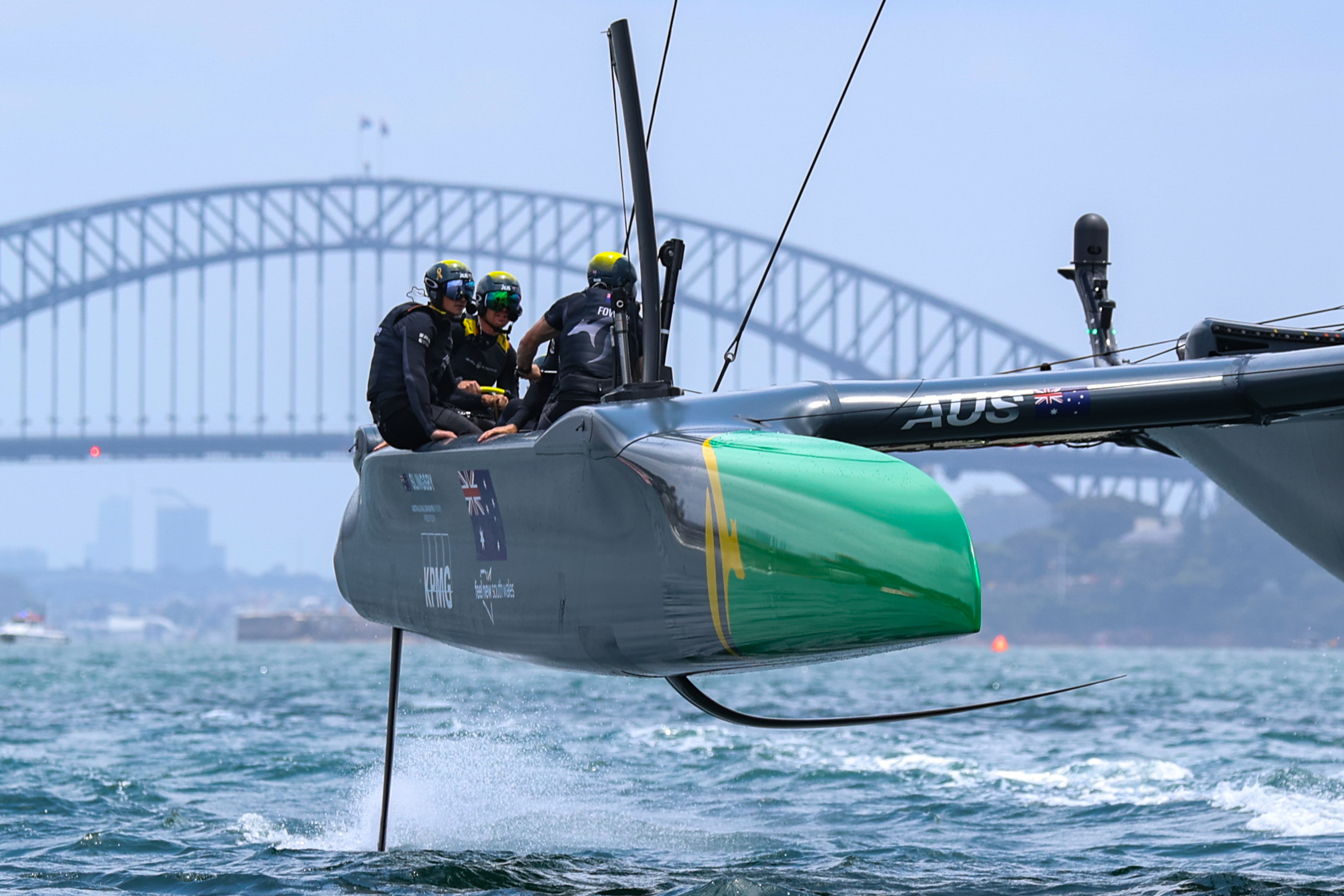 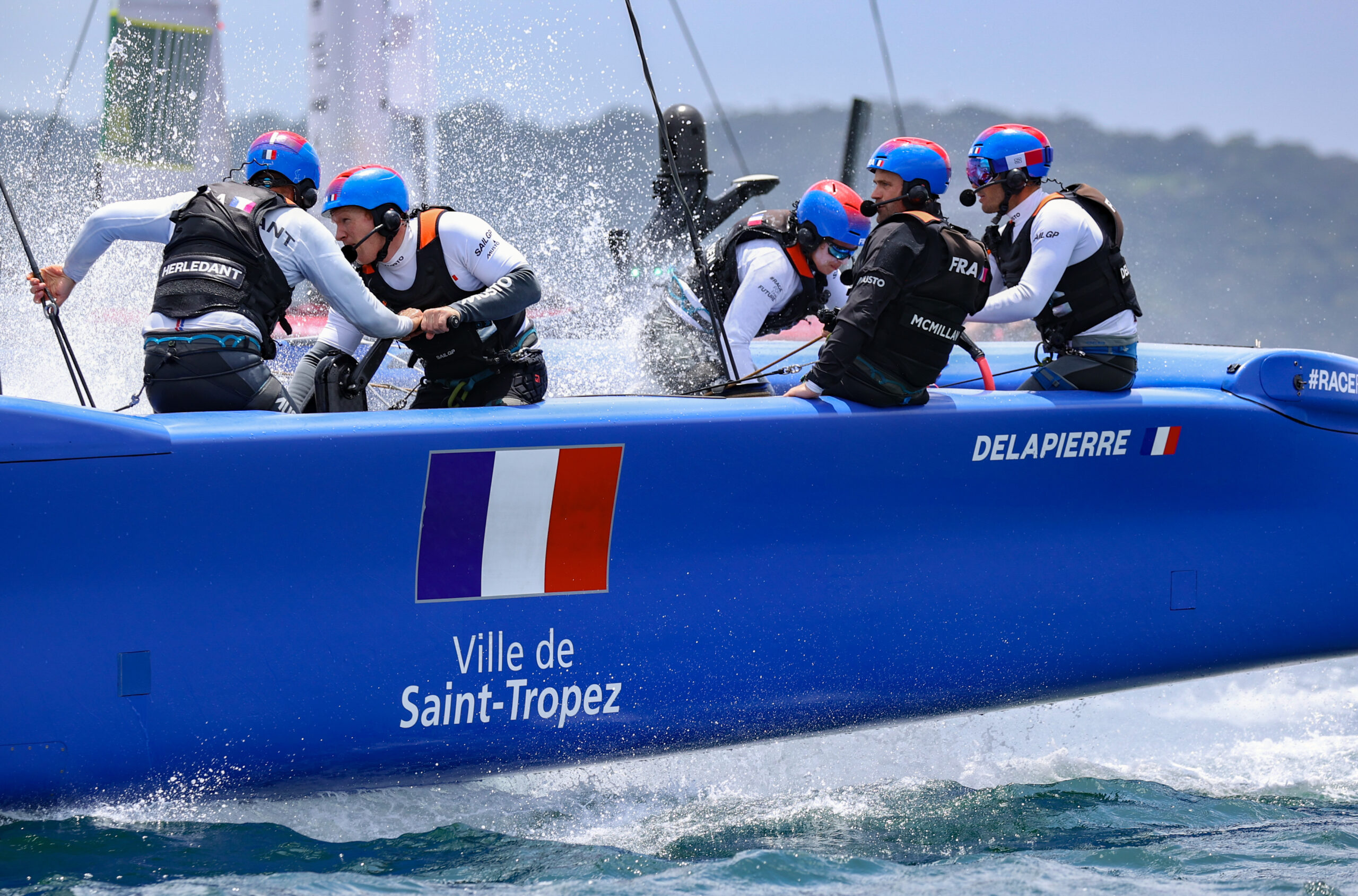 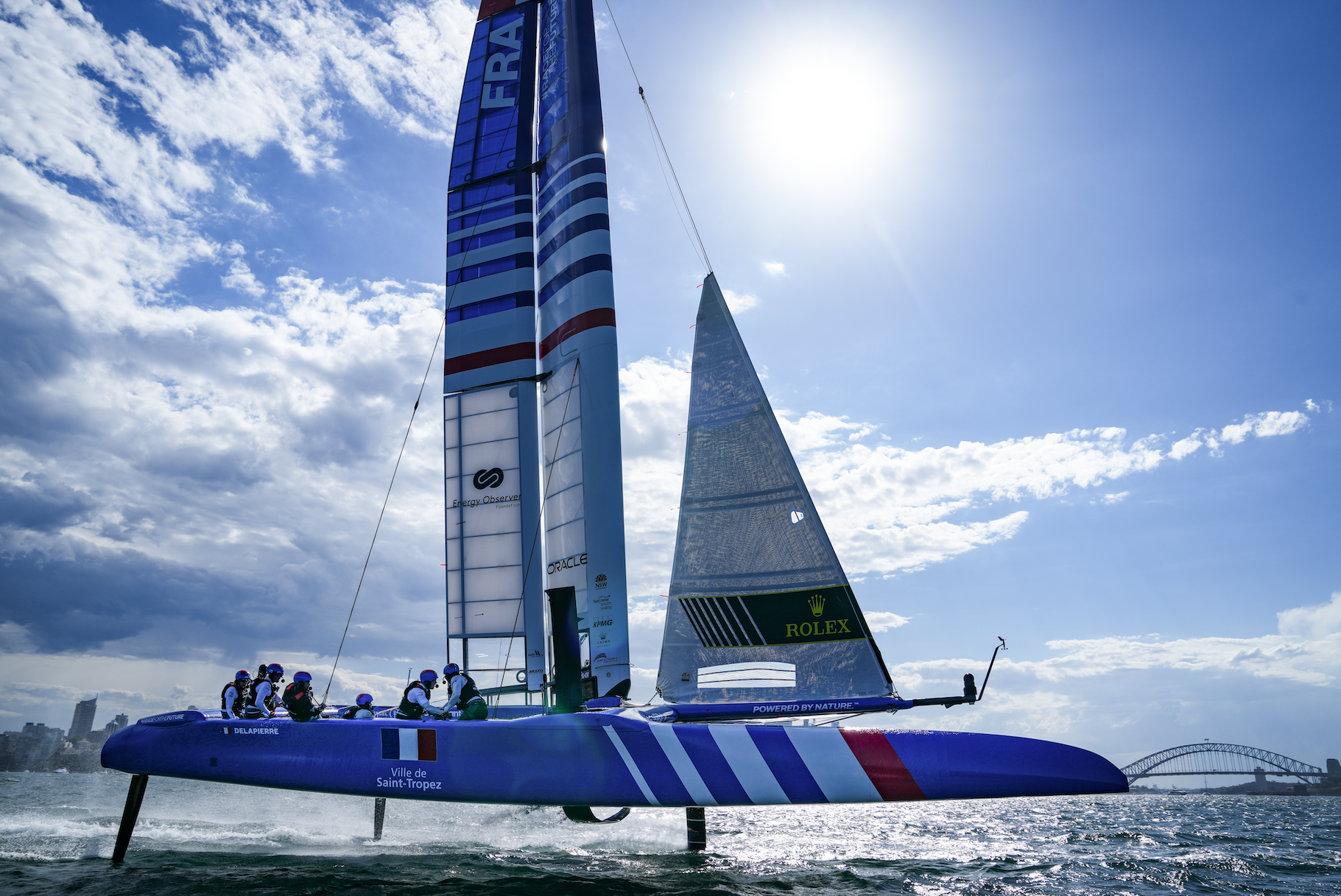 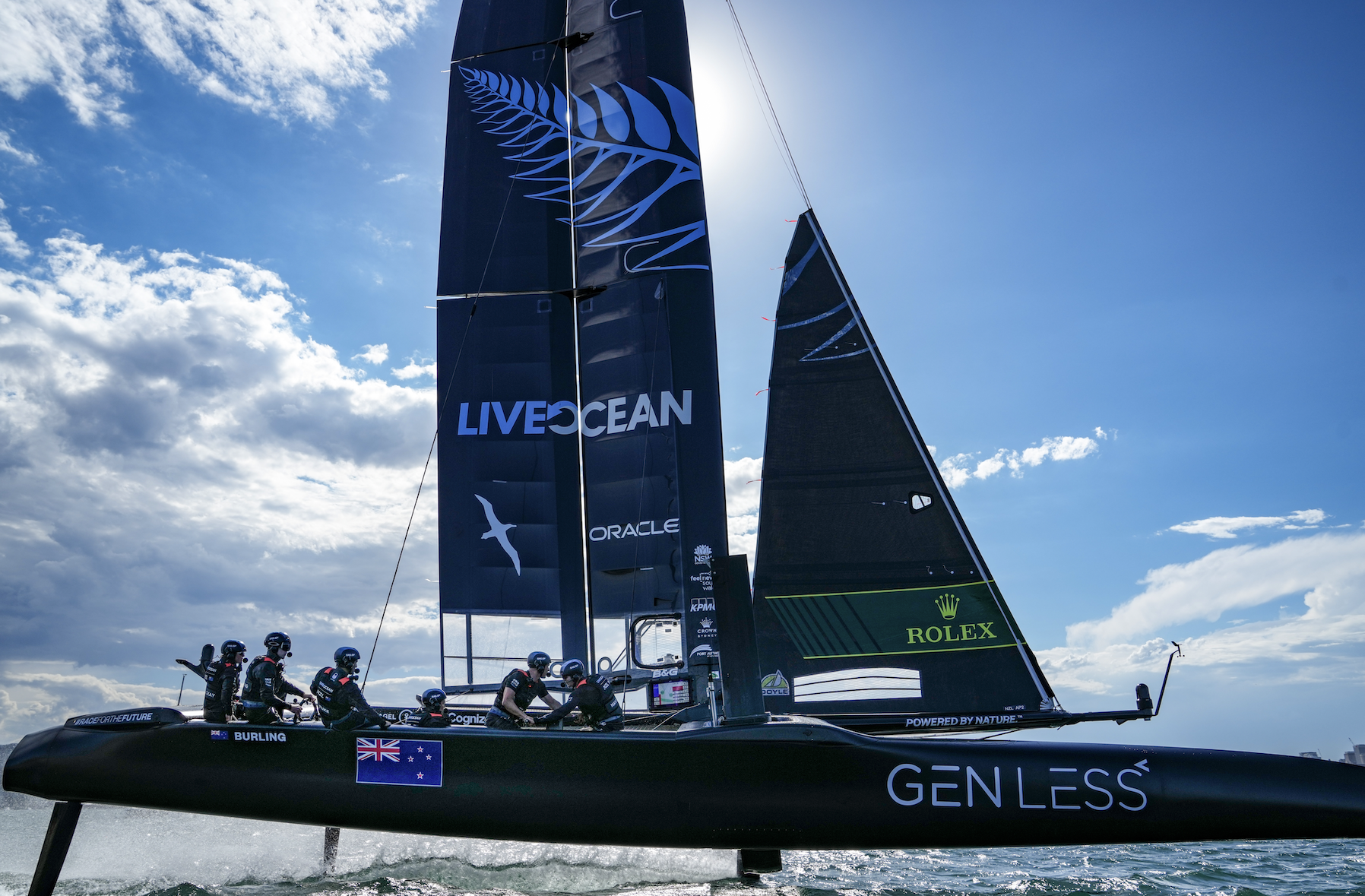 Team New Zealand are looking to climb their way up the leaderboard. Pic - Bob Martin for SailGP 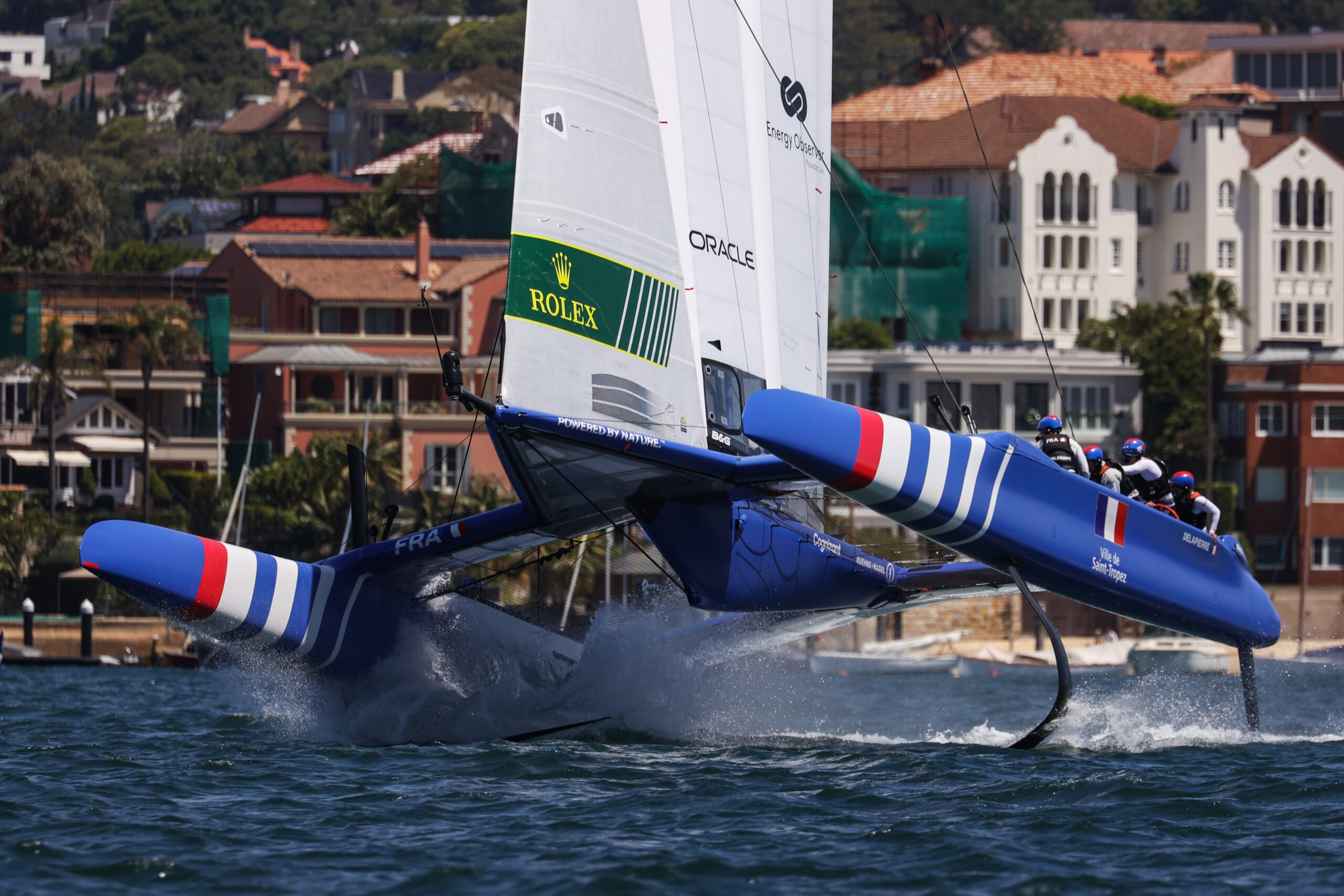 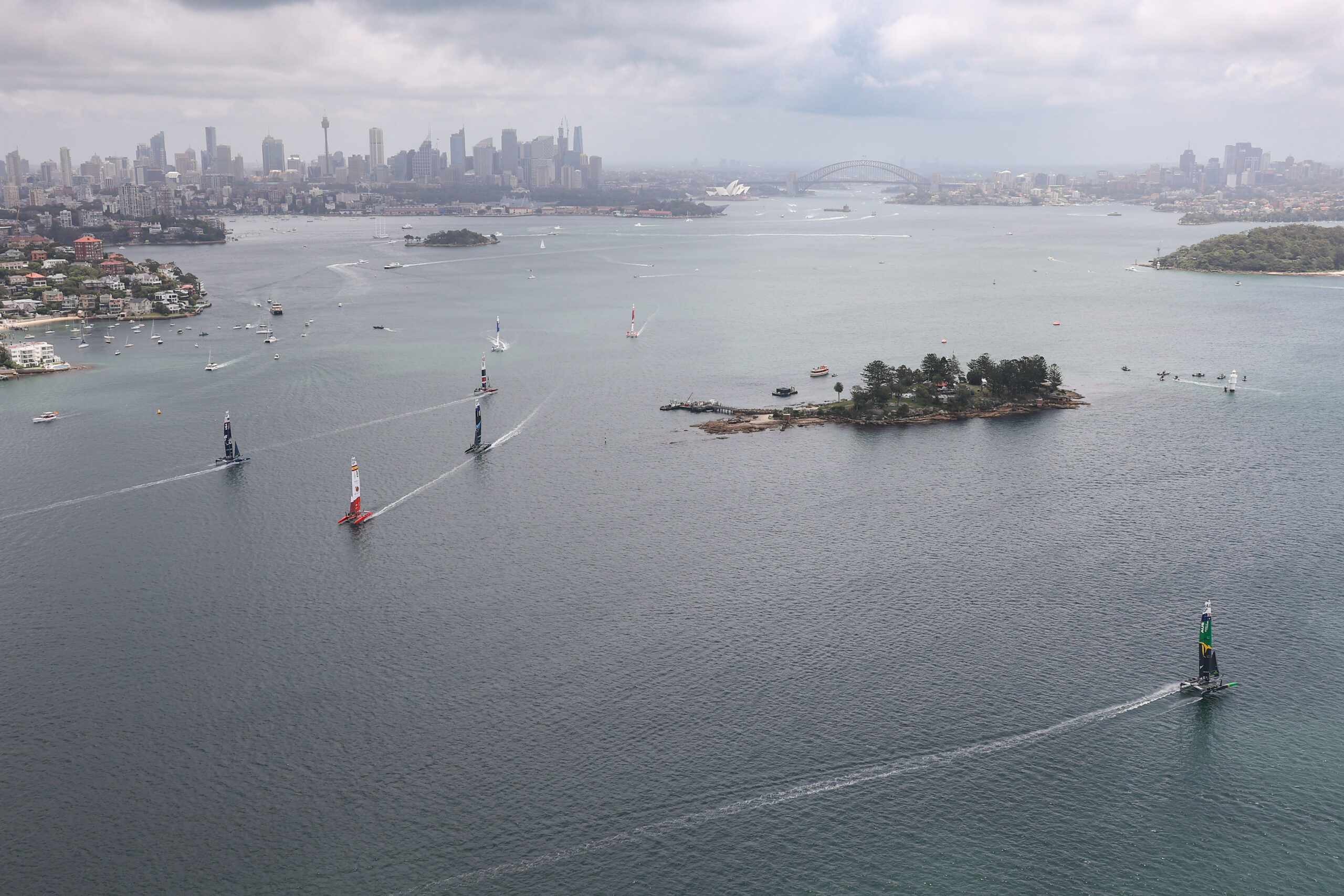 The harbour is set to be full of spectator boats when official racing commences on Friday. Pic - David Gray for SailGP 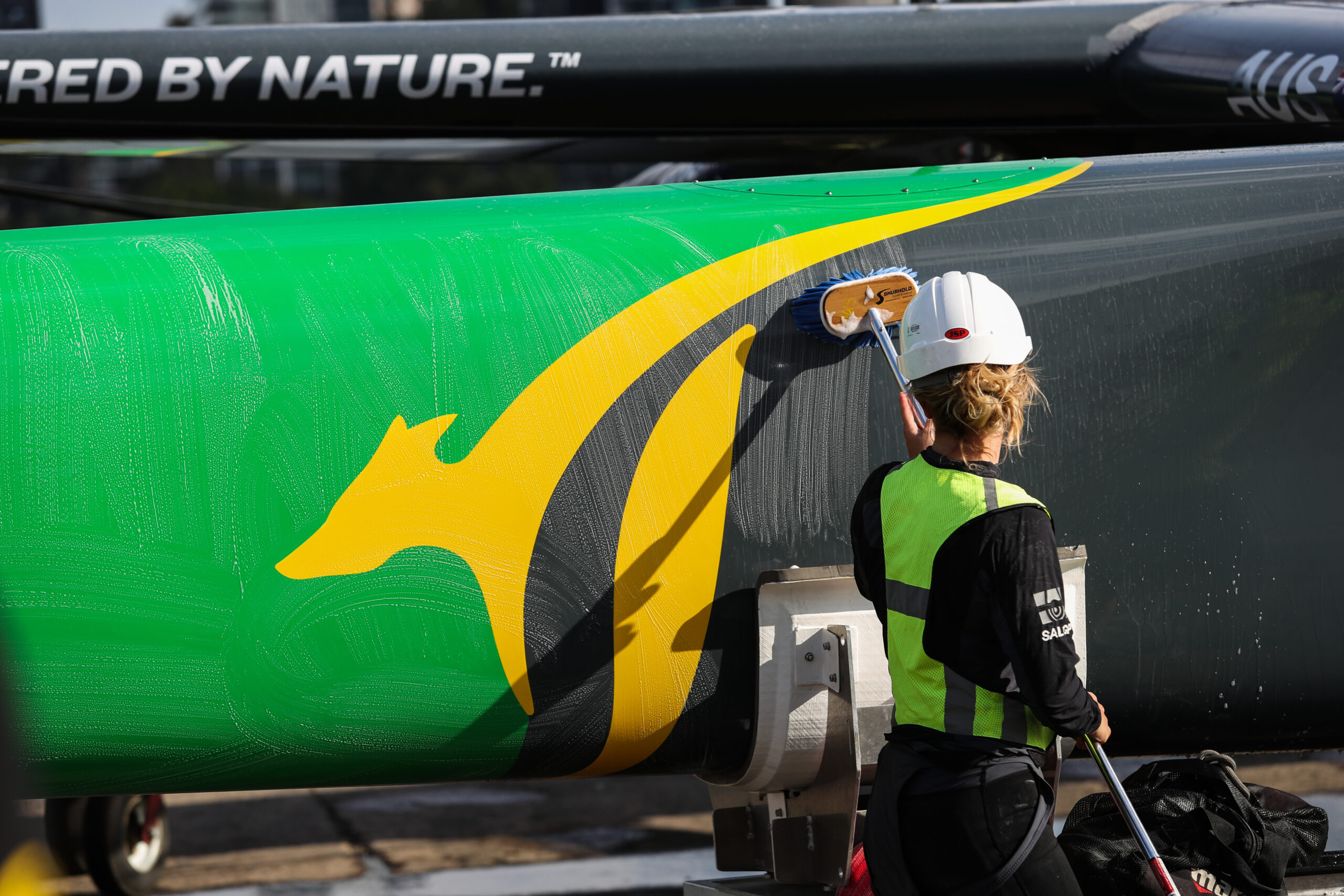 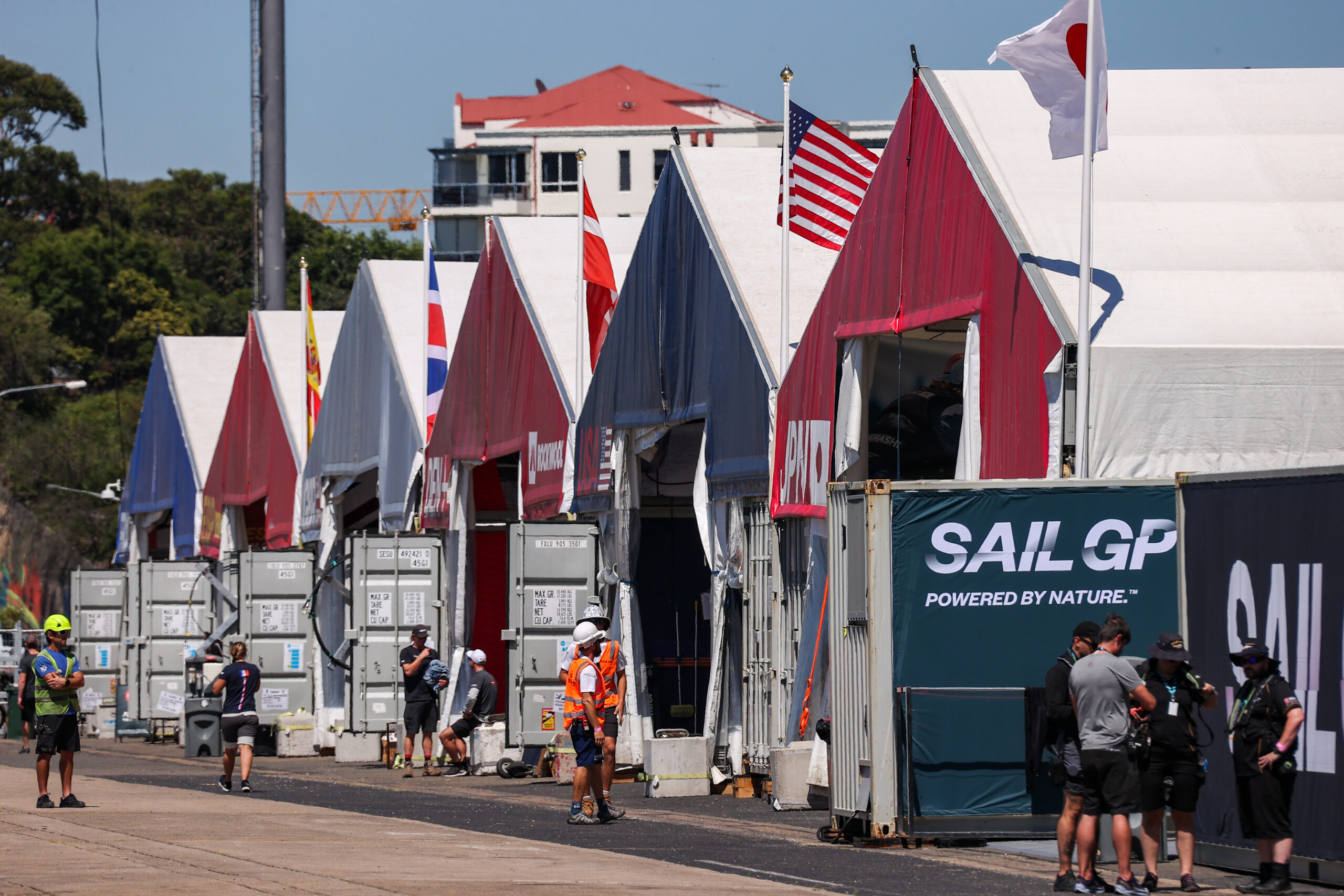 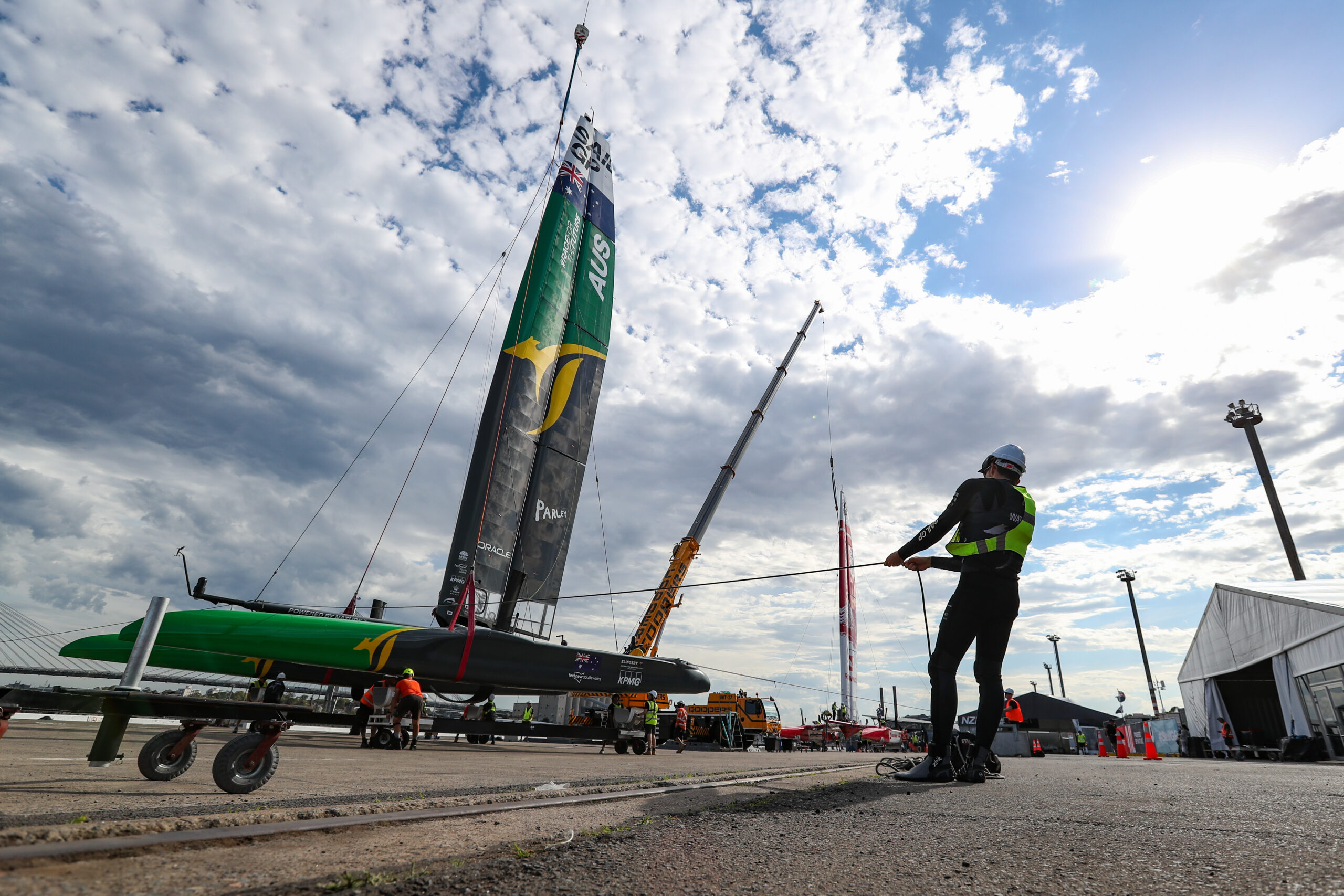 Jason Waterhouse, flight controller and tactician of Australia SailGP Team, assists with the de-rigging of the F50. Pic - Brett Costello for SailGP 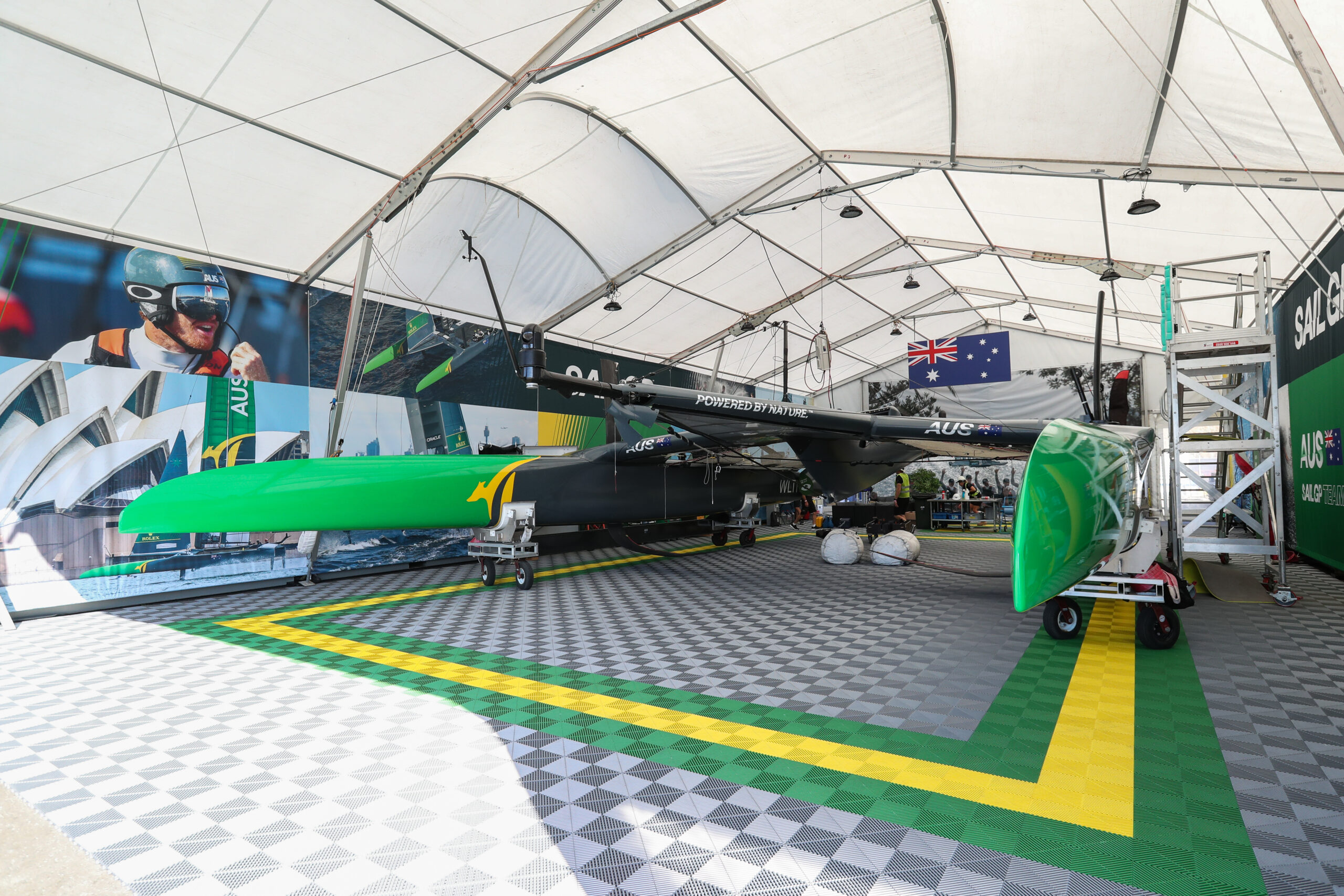 Sydney Harbour was busy on Wednesday morning, as many leisure boaties got a surprise preview of Australia SailGP, as the Australian Team went out for their first training session prior to the event, to be held on the afternoons of December 17 and 18.

Following a delayed start due to technical issues, the Aussies finally got going on the warm summer day. With 2021 World Sailor of the Year Tom Slingsby in the driver’s seat, the team produced a glamour run towards the Sydney Harbour Bridge, Opera House and Sydney Tower Eye (formerly Centrepoint Tower) – for anyone watching, it was a postcard-perfect shot.

The harbour appeared tranquil in comparison to what it will be like on Friday afternoon, when the official racing is due to start. Event organisers expect to see the harbour jam-packed with spectator boats. Shark Island, near Rose Bay in the city’s eastern suburbs, and the harbour foreshore will be crowded with onlookers, eager to witness the spectacular high-speed high-stakes racing that defines this formula-one event.

SailGP Season 1, launched in 2018/2019, is the brainchild of Larry Ellison, former Oracle ceo, and New Zealand yachtsman Russell Coutts. Their vision was to create a sailing event that toured the world and drew in a wide audience, rather than just sailors.

Since the success of Season 1, the F50s (formula one inspired foiling catamarans) have been upgraded and the fleet has expanded.

In Season 2, the fleet raced in six different locations around the world, with two events, including the Australian leg, remaining. The winner of the $1 million in prize money will be decided at the final event in San Francisco in March.

Each Season 2 event attracted large crowds who were able to get a clear view of the world’s most accomplished sailors from Australia, New Zealand and Great Britain, The USA, Japan, France, Spain and Denmark race against each other on the F50s, which can reach speeds of up to 52 knots (96 kilometres per hour).

I was in awe of the super-scale operation as I watched the boats lowered onto the water by cranes at White Bay Cruise Terminal in Rozelle in Sydney’s inner west.

Australia SailGP Event Director Leah Trafford is one member of a team responsible for making Australia SailGP a reality. For more than a year prior to it, Trafford liaised with government and maritime officials to secure a racing venue and onshore venue, as well as contractors and employees to assist in bringing it all together.

Trafford has had a lot on her plate in the lead up to the event, not to mention the uncertainty of border restrictions around Covid-19. But so far so good. According to Trafford, spectator tickets for Shark island are almost sold out on both days.

Due to border restrictions which limited the number of contract workers who could be flown into the country, SailGP has relied on the local workforce.

“We’re really lucky here in Australia to have such great sailing talent,” Trafford said. “Some of the challenges we find in other cities, is not being able to find the appropriately qualified boat drivers for our support vessels, for example. We just don’t have those problems here. In that sense, we’re the perfect city.”

Trafford loves the regularity of SailGP compared to the America’s Cup, which she has also worked on.

“What I enjoy most about SailGP is the consistency of it. You really get to refine your operation and delivery. And showcase Sydney Harbour on our broadcast to the world,” she said.

Nacra 17 Olympian and SailGP Flight Controller and Tactician for the Australian SailGP Team, Jason Waterhouse, couldn’t agree more. “Growing up in Sydney and being a Sydney sailor, there’s nowhere quite like home,” the 30-year-old, who grew up sailing in Sydney’s northern beaches, said. “To be able to showcase these boats on Sydney Harbour is going to be pretty crazy. I’m looking forward to it.”

(After the event is over, Waterhouse will turn his attention to his first Sydney Hobart Yacht Race on Boxing Day aboard the mini maxi URM.)

Australia is on top of the leaderboard, following a sensational win over Great Britain and the USA in the last event in Spain. Just one-point behind sits Australian Jimmy Spithill and Team USA, followed by Australian Nathan Outteridge and Team Japan.

With only one-point separating the top few teams, the pressure is on for the Australian team to back its Season 1 win. Waterhouse and the Australian crew are going to make the most of home advantage.

“We always put a lot of pressure on ourselves to win, so that won’t change,” Waterhouse said. “The home support will probably help that. The season’s still all to play for, so this event will be really critical.”

The team felt the pressure at Season 2’s opening event in Sydney in February 2020. The points from that event were later discarded because of the pandemic. Australia came second to Ben Ainslie’s Team Great Britain.

But the Aussies are determined.

“There were a few different factors at that last event that led to that outcome,” Waterhouse said. “We struggled with a few things. Whereas at this event we’re well established into the season and I feel like those demons have been overcome.

“And at the end of the day we’re leading the championship and he’s [Ben] coming fourth. He will be a factor, but we need to watch everyone else too.”

Kinley Fowler, Flight Controller and Grinder, will feed tactical information to driver Tom Slingsby while on the race course.

“The level of the fleet this year has gone up,” Fowler said.

The 34-year-old from Western Australia recently returned from racing on the M32 (32-foot catamarans) circuit overseas. “This season you’ve got four or five, maybe even six teams that could make the final three [in the deciding race in San Francisco]. And they’re all high calibre teams. It’s no longer about getting the boat around the course. It has to be about the right decisions.

“The big challenge is getting your head out of the boat and doing the racing well.”

Fowler has his eye on the weather. If there are light winds on Friday as forecast, the crew will be reduced from the five to six cohort to four to reduce weight. Saturday, on the other hand, is looking to be a crowd pleaser, with up to 20 knot winds forecast.

But whatever the weather brings, both Waterhouse and Fowler couldn’t be happier to be back in the F50 at one of the coolest sailing venues in the world.

“Anytime sailing these boats is fun,” Fowler said. “Let alone Sydney Harbour. It’s one of the best places to sail in the world in front of our home crowd. It’s always good to come back with the team especially coming to Sydney, get the band back together.”

For more on the Australia SailGP event, see: https://sailgp.com/races/australia-sail-grand-prix-event-page/