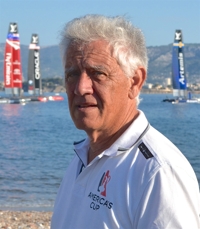 Ken McAlpine to be inducted into the America's Cup Hall of Fame.

The America’s Cup Hall of Fame was founded in 1992, as an arm of the Herreshoff Marine Museum by Halsey Herreshoff, a four-time America's Cup defender and grandson of legendary yacht designer Nathanael G. Herreshoff. Over eighty legends of the Cup have been inducted into the Hall. Candidates eligible for consideration include members of the crew, designers, builders, syndicate leaders, supporters, chroniclers, and other individuals of merit. Each nominee is judged on the basis of outstanding ability, international recognition, character, performance, and contributions to the sport. The members of the Selection Committee are persons intimate with the history and traditions of America's Cup and committed to the integrity of the Hall of Fame.

McAlpine’s love for the sea developed during his childhood in Sydney, Australia, and so it was natural that he went on to train as a naval architect. His involvement with the America’s Cup began in the seventies, and in 1983, on behalf of the Australian Yachting Federation, he was appointed measurer for Australia II and Challenge 12.  Following the success of Australia II, McAlpine was appointed a member of the Measurement Committee for the Cup’s defense in Fremantle, Australia.

McAlpine has lived in a world of secrecy and discretion: he was often the first to learn about loopholes found by design teams and was often faced with the extraordinary pressure to safeguard the deepest secrets of Cup yacht designs. He has ruled on complex technical matters such as Australia II’s winged keel and Team New Zealand’s “Hula” hull. Few people realize what it means to deal with the brightest minds in the sport lead by the wealthiest men on earth who, each in their own way, are experts in exerting pressure to have matters swing their way.

“Ken McAlpine is one of the unsung heroes of the America’s Cup”, said America’s Cup Hall of Fame Selection Committee Chair Steve Tsuchiya. “You can’t do what Ken did for as long as he did it without being both supremely talented and incredibly diplomatic!”

During his long America’s Cup tenure, Ken McAlpine has used his naval architectural and engineering skills, along with tact, patience, and interpersonal skills to deliver a playing field as level as possible within the confines of the sport. His dedication and integrity in performing these tasks had a profound peacekeeping and stabilizing influence in the ever-growing complexity of the technology-driven competition for the America’s Cup.

Mr. McAlpine, along with Class of 2017 inductees Syd Fischer, John K. Marshall, and Doug Peterson, will be officially welcomed to the America’s Cup Hall of Fame at the 2018 Induction Ceremony, details of which will be announced soon.