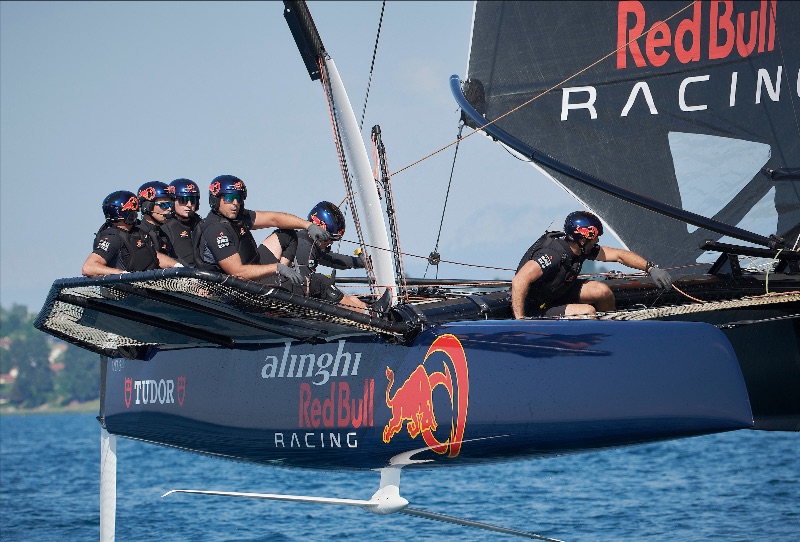 The opening day of the TF35 Mies event in Switzerland was slow to get going as thunderstorms rumbled over Lake Geneva and when racing finally got underway, it was in the late afternoon with a modest 7 knot sea breeze that built to a stable 12 knots, allowing four closely fought races to be held.

The afternoon’s standout performers were Alinghi Red Bull Racing and Realteam for Lèman hope, which ended the day tied on points at the top of the leaderboard.

Bertrand Demole’s Ylliam XII – Comptoir Immobilier also opened the regatta well, finishing the day in third place overall. Prominent French coach Franck Citeau, who is working with Ylliam this season, said the team has got the boat moving nicely on all points of sail.

“Today, they got to their expected level. We still have some work to get where we would like to be, but we could play with the front pack. It was a very good day for the team,” he said.

With an unexpectedly stable breeze condensing the fleet, this was an afternoon when good starts and early speed up the beat were crucial to success in the cutting-edge hydro-foiling catamarans.

Executing this flawlessly Alinghi Red Bull Racing’s clean start in Race 1 resulted in the team being on the pace. With owner Ernesto Bertarelli at the helm, the team extended away after the first beat to cross the finish line six minutes ahead of the fleet.

“We had four beautiful races. It was perfect for the TF35 – sunny, flat water, good competition,” explained crew member Bryan Mettraux. “We had two first-place finishes and two seconds, but the wins were satisfying because we had great starts and could extend from there.”

Alinghi Red Bull Racing’s win in the fourth and final race of the day breaks the four-point tie with Realteam for Léman hope to take the overnight lead.

On second-placed Realteam for Léman hope, Jérôme Clerc’s crew were a fraction behind in Race 1, finishing third. However, they quickly recovered their winning form in Race 2 and Race 3, finding the little extra pressure on the right that they needed to pull them into the race lead, ahead of rivals Alinghi Red Bull Racing.

Tomorrow, the fleet will have to change gear into long-distance racing mode as they compete in the 30 nautical mile Geneve-Rolle-Geneve race against over 250 other boats.

“It will be difficult for the crews to focus on the two racing styles,” Ylliam XII – Comptoir Immobilier tactician Billy Besson said at the dock.

“The long-distance racing is a completely different challenge. You have to carefully observe the weather situation’s evolution, especially on the Lake when everything can change in a moment.”

Mettraux added: “It’s a classic Lac Lèman race, so we are really happy to be taking part. The forecast is for a good north breeze, and our goal is always the same – to be fast on the course and to win.”

The warning signal for the Geneve-Rolle-Geneve race will be at 12:55 CET.

Overall Rankings after four races with one discard: