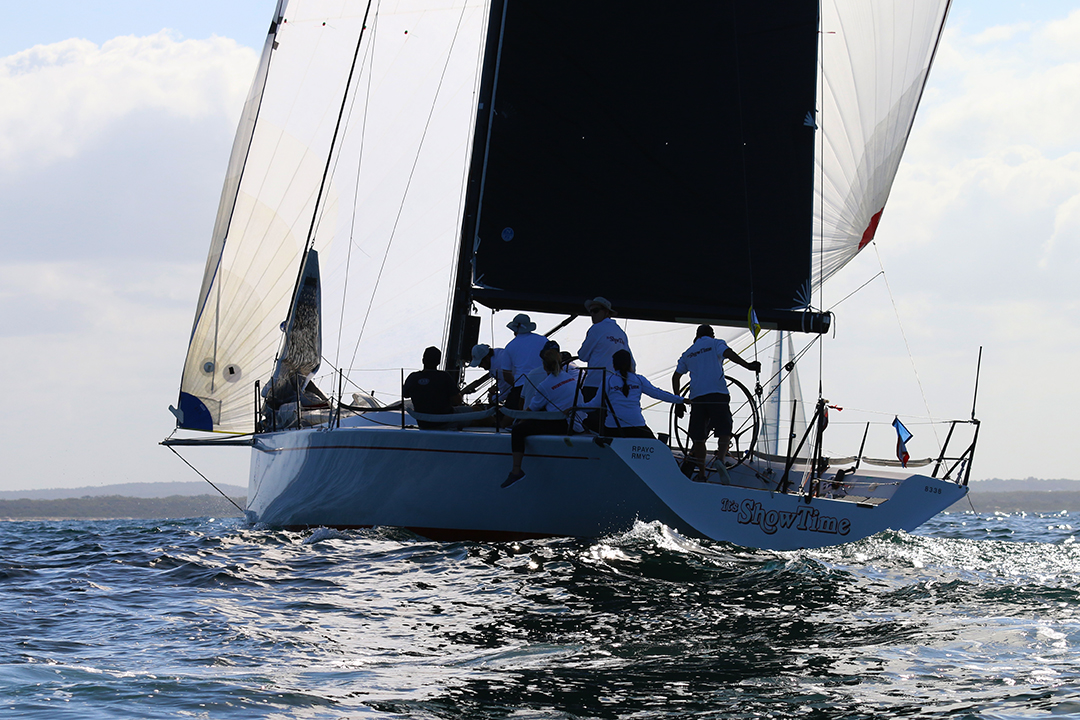 The opening day of the Pantaenius Yacht Insurance Port Stephens Trophy challenged crews and officials in equal amounts, as there were long delays to the start of racing, and a drawn-out race against dramatic skies offshore for the Garmin NSW IRC Championship and Super 12 fleets.

The sports boats, VX Ones and Performance Racing Division 2 fleet inshore fared better. The Salamander Bay windward/leeward course produced 5-7 knots from the south to the south-east, just enough to complete the three-race schedule for the lightweights of the 150 strong fleet.

Mark Griffith’s saving grace, including floating around on glassy seas with the rest of the IRC fleet which waited more than two hours for a start, was second over the line and the IRC Division 1 win with his Sydney-based Ker 40, Showtime.

“We had a good day; very challenging conditions. The guys did well to keep the boat fast and in the pressure,” Griffith said, adding “We’re a bit chuffed to beat our mates on the TP52s across the line.”

On the opening day of the Australian Sports Boat Championship, Malcom Dean’s Shaw 650, The Stig from South Lake Macquarie Amateur Sailing Club, was boat of the day.

“We put the ‘amateur’ in our club’s name the laconic Dean said. “It was very similar to Lake sailing; very shifty and definitely challenging. And we might have got lucky. It’s our second time sailing the boat, I’ve had it close to a month but had other stuff on. It was fantastic to get three races in.”

Leading VX One after three races is Joel McDonald’s Supervax from Royal Queensland Yacht Squadron. McDonald is on the bow while crewing are Ben and Josh Franklin.

The first four boats in Performance Racing division 2 finished on equal combined points, indicating a major tussle for the remaining two days of competition, through to Sunday April 14.

Performance Cruising’s three divisions were meant to head offshore around the islands near the entrance to Port Stephens. This idea was rejigged and swapped for an inshore race between Corlette Point and Shoal Bay when the better breeze eventually settled in the bay.

On Friday evening crews were able to wash away the day’s exasperations, thanks to longtime Port Stephens Trophy sponsor, Pantaenius Yacht Insurance, which put on complimentary drinks and a BBQ at Broughton’s on the Bay.

Saturday April 13 is likely to bring a continuation of variable winds below 10 knots. Given the forecast, regatta director Denis Thompson has adjusted the IRC format to windward/leeward, plus a passage race. All other divisions will race as per the Sailing Instructions.