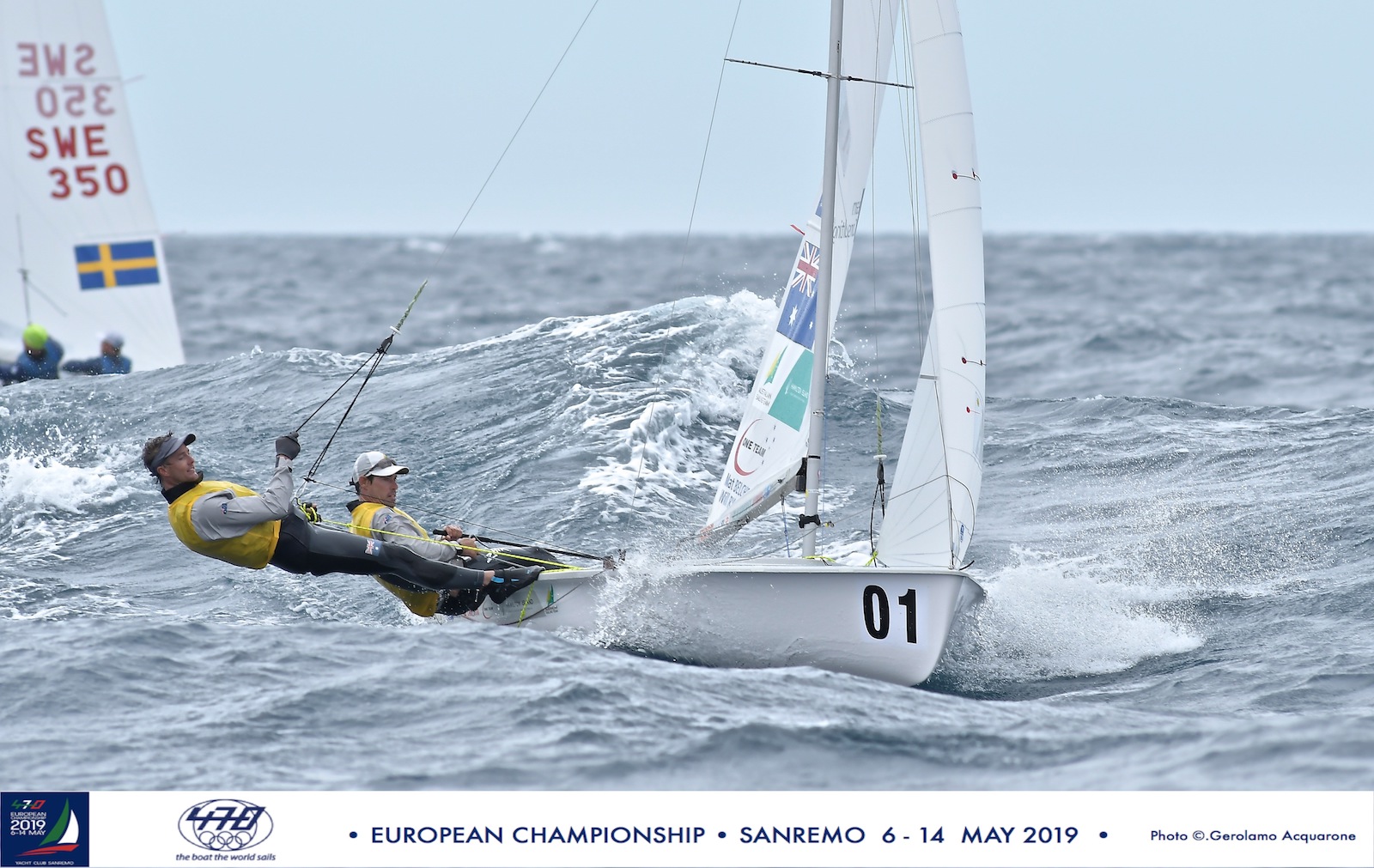 Mat Belcher and Will Ryan in testing conditions at the 2019 479 Europeans.

Tough conditions prevailed on Day 4 of the on Day 3 of the 470 Europeans, organised by local Yacht Club Sanremo and Marina degli Aregai, in co-operation with the national and international 470 class.

The men’s Gold and Silver fleets and the women had their first race of the day in the late morning in some 15 knots of wind that kept increasing and exceeded 25 knots, putting the crews to the test and causing several capsizes, including one by the Swedes Dahlberg and Bergstrom, who were forced to abandon the race.

Given the conditions, the Race Committee called a stop and the crews went back to the marina. After some waiting they headed out at for a 17:00 start. The fifteen/twenty knots soon turned into over thirty knots, making ifor a challenging race for everyone and causing some equipment failures, including a broken mast for the Spanish team of Xammar/Rodriguez, one of the most serious contenders for the podium.

After today’s races the overall standings have changed, but the top spot is still occupied by Australians Mathew Belcher and Will Ryan who scored a first and a seventh. Behind them Sweden’s Anton Dahlberg and Fredrik Bergstrom, with a discard and a second place, managed to stay on the second provisional step of the podium. In third place the Spaniards Jordi Xammar and Nicolas Rodriguez, who also discarded one race and got a fourth, whilst Panagiotis Mantis and Pavlos Kagialis from Greece are currently in fourth but very close to the top and have taken over Austria’s David Bargher and Lukas Maehr, who scored a 6 and 28. New Zealanders Paul Snow- Hansen and Daniel Willcox recorded the strongest comeback with a win in the sixth race.

In the women’s fleet UK’s Hannah Mills and Eilidh McIntyre showed good performances in today’s strong breeze, bagging a third and a second place, going back to the top of the scoreboard, followed by France’s Camille Lecointre and Aloise Retornaz (6/1 today) and by Spanish Silvia Mas Depares and Patricia Cantero Reina (4/4 today), who keep a three-points margin on Afrodite Zegers and Lobke Berkhout from the Netherlands.

“It’s been very difficult conditions on the water, very strong winds, we had to be careful with the gusts and we are happy on how we raced. We had a good day, it was tough and also we tried not to capsize but we managed to stay upright and had two good races and up in the overall standings. We’re happy with our performance today,” explained the Spanish crew.

Tomorrow, the penultimate day of the Championship, the first start is scheduled for 12:00 with weather conditions very hard to predict.

The video highlights from Day 4 are available here.