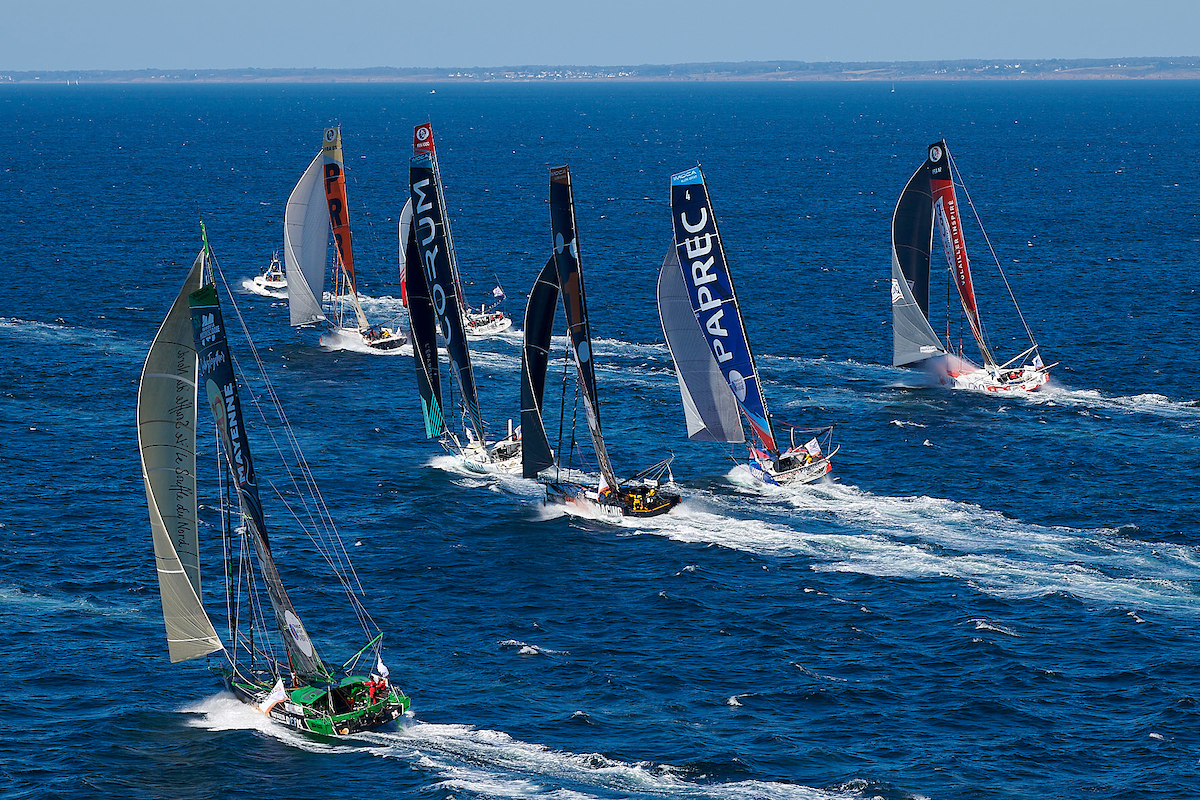 After a year of fine tuning and her first win this summer in the Rolex Fastnet Race, Jérémie Beyou’s IMOCA, Charal with the sailor from Marseilles Christopher Pratt aboard, shone at the 2019 Azimut Challenge this weekend in Lorient. With just over a month to go to the start of the Transat Jacques Vabre, the event was a test for many of the boats, whether they were old or new, foilers or not. There was a lot to see at every level and the weather conditions were ideal. Out of the twenty boats ranked at the finish, there were 12 foilers and 8 non-foilers, three of which made it to the top ten. We take a look at what happened, the lessons that were learnt and hear from some of the 42 IMOCA skippers who took part in this contest.

Charal stood out above the crowd

Everyone was eagerly looking forward to the battle between the boats from the latest generation of IMOCAs with foils and the foilers (and indeed non foilers) from 2016 and the older boats, some of which have now been fitted with foils. In what was a real test of performance and flying, everyone was watching to see how the VPLP designed Charal would do against the two new boats, Thomas Ruyant’s Verdier designed Advens for Cybersecurity and Sébastien Simon’s Kouyoumdjian designed Arkea Paprec. Neither of the two latter boats would however end up in the top 10 in the 48-hour race, as the two monohulls so recently launched this summer have not yet had time to try out all the set ups to be able to compete with the leader.

As for Christopher Pratt, he stressed the very positive results since the win in the Fastnet: “This rewards all the hard work we have done with the team since last winter in trying to get to grips with the IMOCA, Charal.”

Three non-foilers in the Top 10

Further back, among the other nine IMOCAs in the top 10, we should stress the fantastic second place obtained by Kevin Escoffier/Nicolas Lunven aboard their 10-year old PRB (designed by Verdier-VPLP in 2009) which has also been fitted with foils. Kevin Escoffier was pleased with the result and being going through a wide range of points of sail, but kept a critical eye on performance: “When reaching, we were not as fast, so we still have work to do, in particular on the sails and the adjustments to the appendages. Upwind, we saw we could perform well and downwind we also managed to catch up. That proves that PRB is a good all-round boat.”

Behind Kevin Escoffier’s PRB, his former team mate with Dongfeng in the Volvo Ocean Race, Pascal Bidégorry, took third place with the American, Charlie Enright on 11th Hour, Alex Thomson’s former Hugo Boss, which once again showed how fast she could be…

There was a good fourth place for Maitre Coq IV skippered by Yannick Bestaven and Roland Jourdain who finished less than an hour ahead of Groupe Apicil sailed by Seguin/Richomme, who pulled off something of a surprise finishing in fifth place in the rankings for the 48-Hour Race. They were also the first monohull with straight daggerboards to finish just ahead of another non-foiler, Banque Populaire skippered by Clarisse Crémer and Armel Le Cléac’h. The duo Sorel/Le Brec on V&B Mayenne, was the third non-foiler to make it to the top 10, just ahead of Bureau Vallée 2 sailed by the duo, Burton/Beaudart (10th).

Women on the attack

It was after a closely fought final stretch against Clarisse Crémer and Armel le Cleach on Banque Populaire X and Damien Seguin and Yoann Richomme on Apicil that Sam Davies and Paul Meilhat took a very good seventh place in the 48-hour race. “A high-speed race with lots of positive lessons for the Transat Jacques Vabre,” declared Sam Davies.

We should note too the fine eighth place obtained by Isabelle Joschke for whom this was the first race since the relaunch of her MACSF. Ranked fifth in the runs, then eighth in the 48-hour race, Isabelle and her co-skipper Morgan Lagravière showed the full potential of the monohull, which is now fitted with foils. Isabelle Joschke: “I really enjoyed myself during these two days of racing. This first competition also enabled me to find my feet aboard with Morgan. We quickly found a way to organise things and a way of communicating. It all fell naturally into place.”

When the Azimut Challenge steps up a notch

Antoine Mermod, President of the IMOCA was pleased with this ninth edition of the Azimut Challenge and the extent to which the event has grown over the years: “This edition which took place in ideal conditions was a real success and we are proud of that. The change in the format in particular with the big 48-hour race was a good idea, as it was a very interesting race to follow. With each edition, the event is growing in importance and the class is pleased with the extension to our partnership, which continues until 2022, concerning the organisation and the development of our digital tools.”

Rankings for the 48-hour race